Band Spotlight: The One Hundred

Bringing back nu-metal and all of the great things about genre-bending old-school alternative music, The One Hundred are here to do some very good things. We chat to vocalist Jacob Field about the band’s inspirations and more in our latest Band Spotlight. 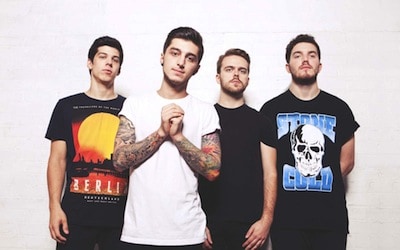 S] All right guys, how are things today?

J] “Yeah we’re all good thanks dudes. We’re all recovering from Jacob’s birthday and the show we played at Waterrats last night.”

J] “We have nothing booked as of yet but that doesn’t mean that we can’t sort something out. We’d love to play as many places as possible so hopefully we’ll be up North sooner rather than later.”

S] Talk us through ‘Breed’ and its inspirations?

J] “’Breed’ was the first song we wrote together as a band and we knew from the start what we wanted to create. We combined elements of hip-hop and dance with old-school Nu-Metal, we’re all really stoked with the outcome.”

S] Is that a good indication of what the material from your full-length will sound like?

J] “There’s a lot of variation in the tracks we’ve written so don’t necessarily expect another Breed, but expect something different. Breed was the first song we wrote so we’ve naturally progressed from what we created first time around and built upon that. Some tracks reflect our passion and love towards grime and hip-hop whereas others will remind you of old school nu-metal record. We’ve really experimented with our favourite genres and it’s had such a positive impact on us when we’re creating and writing new music, we really feel we’ve created a unique style. We can’t wait for you to hear more!”

S] What about outside of music, what are your inspirations?

J] “When I was younger The Rock and Stone Cold Steve Austin were my childhood heroes and they inspired me to believe I could become a professional wrestler, that didn’t end as planned. I’m a bit of a comic and gaming nerd, if I were to be completely honest. I have the complete collection of The Walking Dead comics. And a full Final Fantasy sleeve, so games and comics have definitely inspired me, they have wicked themes and subjects so they definitely help me out with lyrics as well.”

S] What were some of the highlights of 2013 for you guys?

J] “Everything to be completely honest, we’ve been overwhelmed by the positive responses we’ve received. We’ve been incredibly lucky with radio plays from XFM, Kerrang! and Team Rock Radio we never knew people would dig our first track this much. It’s pretty fu**ing rad getting played by Dan Carter on Radio One and playing our third show with Skindred all in the space of three months.”

S] If you could come up with a Frankenstein’s Monster for The One Hundred sound – what would it be made up of and why – for example, the head of Limp Bizkit, and the arms of Shikari?

J] “We’d probably choose the head of Slipknot, body of Issues, arms of JME , legs of Limp Bizkit and the Beard of Hulk Hogan.”