We catch up with Jon Larsen of Volbeat at Download Festival 2014! 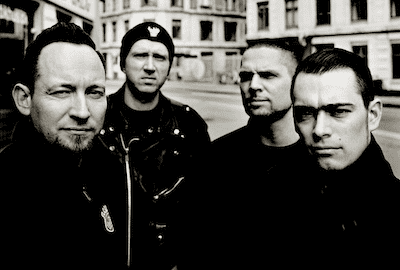 S] How has Download been for you guys so far? A bit soggy?

J] “Well, yes we arrived last night after playing Nova Rock in Vienna so haven’t been here for that long We arrived just in time to watch the England vs Italy match with a nice glass of beer. I’m not a massive fan but some of the crew are. But let’s not talk about the Danish team, alright?”

S] Ha sure! So how did you guys hear about the story of Lola Montez, the eponymous track on your latest album ‘Outlaw Gentlemen and Shady Ladies’?

J] “Well, I actually hadn’t heard of her until Michael [Poulsen] wrote the song! But I guess he found her as he has been spending a lot of time reading books about the old West whilst on tour. He has been watching tons of movies; everything from the Clint Eastwood to the John Waynes to any kind of obscure westerns he could find. He even dug out his dad’s old tapes (he was also a huge western fan) so I guess that’s where the name Lola Montez popped up! Then he looked into her story and decided to write a song about her as I think there are a lot of people who don’t really know who she was, but she had a very interesting life. I looked it up and she had a powerful life. She was quite a radical at the time.”

S] How has life been in the band since Rob [Caggiano] joined?

J] “Interesting I would say is the word. Rob is definitely a character, let me put it that way. Of course it became slightly different, him being from the US, he has his way of doing stuff, and we have ours but you know it’s been good. He’s a great guy, he’s a fabulous guitar player and for what it’s worth, he can always make people laugh. Not always intentionally, but there is never a dull moment with Rob in the band.”

S] Was he your first choice?

J] “Not really. Well, we hired him as a producer at first, not as a guitar player. We actually didn’t know he had left Anthrax until we were recording the album; we spent hours screaming at him ‘Why would you do such a thing?’ we thought he was an idiot but you know he said he wanted to focus more on his producing career rather than being on tour all the time. We were like ‘Well you’re still an idiot, but ok!’ And then he started adding bits and pieces to the album, you know bits of guitar, some solos here and there and I guess him and Michael started jamming at some point and Michael called me up and said, ‘You know what, I think we should ask rob if he wants to join the band’ and I was like ‘Well he said he didn’t want to’ but he did and Rob said ‘Well, you know, I have to sleep on it for a couple of days to think things over’, and he came back and said, ‘You know, I wanna do this!’ So we went into the studio as a three-piece and came out as a band of four!”

S] So you guys are pretty popular in Denmark?

J] “We can still pull in the big crowds we did three shows in the biggest indoor arenas, two sold out shows in Copenhagen and one sold out show in the mainland and also outdoor shows in the summer. Instead of doing the usual festival run we decided to try and do our own stuff and so far ticket sales are going pretty well!”

S] You guys have a pretty distinctive sound. Is there anyone similar out there you’d like to tour with?

J] “I don’t know why there isn’t anyone like us. There should be! People keep saying that we have reinvented the wheel or something but we were like ‘No we haven’t, we have just played what we felt like.’ But I guess maybe we have.”

S] How come you have managed to arrange more tour dates in the UK? We are very glad that you have!

J] “The UK is actually a tough market in Europe. We have been playing a lot in the UK over the years and we did a pretty successful tour last year with Iced Earth where we did all the academies and played at the Brixton, which was a pretty big deal for us. So we thought what better way to end this whole album tour with a week in the UK to say ‘Thank you so much and see you next time!’ I mean, hey, in the UK you still have all the great record stores so of course we had to come back.”

S] So I wanted to ask, do any of you actually drive a Cadillac like Mr Cadillac-Blood?