Home » Be My Enemy

Be My Enemy‘s Phil Barry, should be better to known to alt. folks as one of the founder members of the wonderfully abrasive Cubanate. After what seems like an eternity off our collective radars, Phil‘s back with a new musical project, Be My Enemy, whose debut album, ‘This Is The New Wave‘, has just been released on the Deathwatch Asia label. It’s a loud, bold, beautiful statement of techno-punk intent and it makes us here at Soundsphere feel young again. Serendipitously coinciding with the news that Cubanate are to reform, Phil took time out from the studio to answer a few hate mails from Soundsphere HQ. 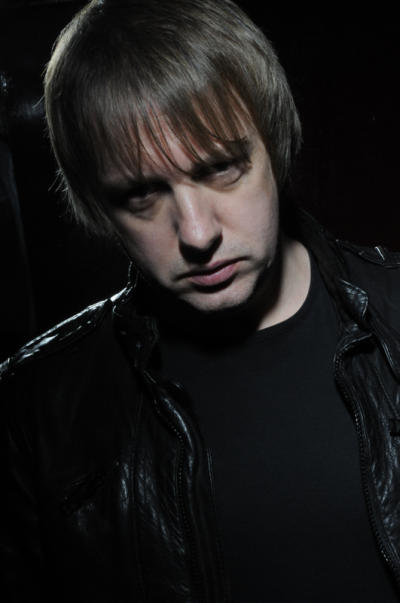 “I figured it was time to do something interesting”

S] Hi Phil, you’ve been quiet for a few years now, what have you been up to?

PB] I spent a lot of time wondering what to do next. I lost focus, I didn’t play guitar for years and wasted a lot of time. Who knows, perhaps that was the journey I had to take to get to where I am now, which is now completely the opposite. But over that time I did release several dance records under my own name and some under aliases, probably the most noticeable of which was ‘Swarm‘ by String Theory which sold close to 10k copies on vinyl via Carl Cox‘s ‘Intec‘ label.

S] When did you begin working on Be My Enemy?

PB] About three years ago. I’d become bored of making dance records and figured it was time to do something more interesting. I got myself back into playing the guitar and decided I was going to be the frontman and do everything, that way if it fails then I’ve only got myself to blame.

S] What’s the reaction been like to the BME material so far?

PB] So far it’s been really good. I’m getting messages from kids who are into rock and metal and who aren’t into industrial or dance music who love it, so it seems to have wide appeal. I’m also pleased the album title is annoying a few people. That was the intention!

S] What are your aspirations as far as the first BME album goes? Have you any goals in mind for it?

PB] I wanted to make it very clear that BME wasn’t Cubanate mark two and to establish a very clear framework for future albums. This meant I wanted the backing tracks to the songs to be varied so I was never painted into a corner musically in the future, so there’s a bit of drum ‘n’ bass, a bit of techno, a bit of breakbeat and so on. There’s nothing as dull as an album where all the songs are the same tempo and style, is there?

S] Is there any difference to how you approached writing for the BME record as opposed to your work on the Cubanate material?

PB] The Be My Enemy sound is different; it has sounds and rhythms that I would never use in Cubanate. For instance some of the old rave stabs like the ‘Mentasm‘ stab I wouldn’t use in Cubanate, Cubanate is more techno and industrial-influenced. Obviously I’m the singer in Be My Enemy which means I have to imagine my vocal over the tracks instead of Marc‘s when I’m working on them, my vocal style has a more of a punky vibe to it which lends itself to a different vibe of track.

S] Do you see your previous with Cubanate as a blessing or a curse? Obviously it gives BME a chance to hit the ground running, but do you feel a certain weight of expectation upon you?

PB] Well it’s a blessing, people still remember Cubanate with affection for some reason. Luckily they have forgotten Marc calling them a bunch of c***suckers every night on tour and the many drunken and erratic tours we did. But, we did also do some killer songs and albums that I’m very proud of. No weight of expectation though, I knew the BME record had to be good, otherwise it would have been time to give up, to be frank. But a bit of pressure, self-imposed or external, is good, it means you have to raise your game.

S] Back in the day there was quite a vibrant UK scene what with you guys, PIG, Sheep On Drugs, Judda, Optimum Wound Profile, Leech Woman, et al. How do you view the UK alt and industrial scene now? Are there any bands that are currently rocking your world?

PB] One thing you have to understand about me is I don’t really listen to the kind of music you expect me to listen to. I find if I listen to a band that is in a similar style to the stuff I’m making I can’t listen to it objectively and can’t enjoy it for what it is. Some days I’m in the studio for 10 hours working on a BME track so the last thing I want to do after that is listen to more of the same so I tend to steer clear and put on some Brian Eno or something like that. M.I.A rocks my world currently, probably my favourite album this year.

S] How are things working out with your label Deathwatch Asia? How did the deal with them come about?

PB] Jamie got in contact with me ages ago on MySpace when I was putting up some of the early demos of the Be My Enemy album and he just kept in contact. He took a risk signing the band, I think Be My Enemy is the only guitar band on his label, but he’s very energetic and enthusiastic, which is great.

S] ‘The New Wave’, the lead track on the album, seems quite personal, not least as it’s the only song on the album written from a first person perspective. Can you mention names?

PB] The song is about me and my getting my act together and getting over my own fears about being the frontman of Be My Enemy. The ’10 years’ bit is about me wasting time and the general frustration I felt in that time. The chorus? Well I don’t wear colours, I don’t read the ‘In Zines’, and probably will never be a beauty queen. Self-explanatory really, as is the bit about drugs and wine!

S] What bands were you listening to during the making of the album? Which bands do you think had the most significant effect on your writing process?

PB] I hate the ‘What are your influences’ question so I always just generalise and say drum and bass or techno. But early on when I was trying to get the vibe for the BME sound one band that did influence was Green Day. It was that kind of energetic nu-punk sound I was trying to emulate. Sometimes electronic music can feel robotic and lifeless and I wanted BME to sound like a rocking band.

S] How did the Cubanate reunion come about and will it have any effect on further BME material?

PB] I’ve been back in contact with Marc for the last three or four years but last year I was asking about getting the Be My Enemy album mastered and if he knew anyone who could do the job. Well he didn’t, but he heard the album and fancied having a go at remixing a track and it’s moved on from there. The only difference it should make to BME is that it puts the next BME album on hold while I’m working on the new Cubanate album. I’ve already a couple of ideas down for the next one which are cool. Actually, doing the Cubanate album frees BME up ‘to go off on one’ stylistically if truth be told, I don’t feel like I have to do some songs in a similar style to Cubanate on the next BME album which I did do on this one.

S] What next for BME?

PB] My plans are to concentrate on the Cubanate album over the next three or four months and then jump straight into the next BME album after that and hopefully start playing BME shows sometime later next year.