Cumbria’s Falling Red is lewd, crewed and tattooed and coming at you harder and faster than Motley Crue can gain speeding convictions. Bringing the best in UK sleaze rock, Louisa Kouzapas caught up with vocalist Rozey to reflect on how they’ve been ‘Shaking The Faith’. 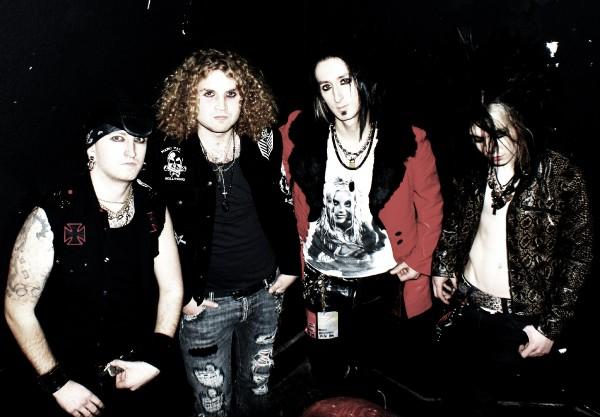 S] Some of our readers may not have heard of you guys – give us a quick introduction to who you are, what you do and why you do it?

R] “Falling Red is a band like no other band around at present. We get heavily categorised as a sleaze band cos’ our songs are pretty grimy and mainly about the good things in life like alcohol and sex. But we rock harder than most; don’t follow any particular trends and pretty much go against the grain. We love playing live, and regularly play in excess of 150 shows a year.  We love that whole on the road lifestyle.  Meeting and making news fans on a daily basis.  Rockin’ out on a stage and then kickin’ loose after the show. Basically we do it cos’ we enjoy it so damn much!”

S] What was the best thing you read in a review about the album ‘Shaking The Faith’?

R] “There was way above average great reviews for that album, which kind of blew our minds a bit.  We loved what we had created, but it certainly wasn’t the mainstream rock sound, nor was it 1988 revisited.  We took a gamble, and it seems to have paid off.  I guess when we read Big Cheese’s review stating that we were ‘rock gods in the making’ it made us both happy and nervous.  For probably the first time ever, someone had expectations of us!”

S] Was it everything you wanted from the album musically or is there something you wish you’d included or done differently?

R] “Our recording budget was very limited but the album sounded the way we would have wanted it regardless. Terrorvision producer Matt Ellis captured our on-stage energy and certainly brought the best out of us, which is why we have since returned to Axis Studios for him to produce our new EP. We had a few more songs that we could have used, but we really wanted to do an eight-track album like back in the day. We wanted it to hit you in the face and leave you wondering what the hell that was. It was all recorded and mixed in 10 days, just like Poison’s ‘Look What The Cat Dragged In’ album. The only thing we could do to make it better for us, would be to invite all those lovely girls from Players [Lap Dance Club] into the studio.”

S] What have you guys been up to since the release?

R] “We just got straight back out there on the road to promote the album. We had some killer tours with Vains Of Jenna and Dirty Penny and then got invited to open for Sebastian Bach on both his solo shows in the UK. He’d squeezed them in between the Guns ‘N’ Roses dates and it was pretty cool for us, as he is definitely an influence on the band. He really is a larger than life character.”

S] You seem to be bringing back sleaze rock. How does it feel to be making an impact on the music world?

R] “I’m not sure we’re prepared to bring anything back. We sound f***-all like all the 80s bands.  Sure they influenced us, as have Maiden, Metallica and AC/DC, but in our opinion we’re not about a glam or sleaze revival, we’re just such a bunch of scuzzy rockers that the tag is easily slipped on.  There are some great American and Scandinavian bands out there but once again I think our sound is very different. To begin with we were amazed at how many punks would come to our shows –  proper punks with big mohawks. They love our energy and craziness. It’s always good to see you have crossover appeal. I’m not totally convinced we’ve made an impact on anything much yet. We’re more like a papercut – It’s a small mark, bloody annoying and a constant reminder that it’s there.”

S] Talking of Scandinavia, we see a tour with Star Rats on the horizon.  How did that come about and what are you most looking forward to (other than the girls of course)?


R] “Glad you mentioned the girls before we did! However, now that you have, I have got to say we have some of the most beautiful girls in the world come to our shows and they never seem to wear too many clothes!  The Star Rats tour came through our management.  I think originally Star Rats were planning on doing a few UK dates then our management who also represent Star Rats UK interests, decided to put both bands together for a truly decadent rampage across the UK. It’s called the ‘Wanna Get F****d Up?’ tour because everyone is so down and depressed in Britain right now.  Tough times, but hey, get out to a show, party hard, get f****d up and enjoy your life!”

S] Sweden is noted for having the best sleaze rock scene on the planet, can any of the famed Swedish rockers be claimed as your inspiration (and why)?

R] “Backyard Babies is a huge influence on us all, not just musically but also their work ethic. We would rather have a career like theirs than a wham-bam flavour of the month one. Nicke’s solo material is also very cool and inspirational. Take a few minutes to check out ‘Spoken Words’ on Homeland.”

S] You’ve been a hard working touring band for a few years now and gradually more doors are starting to open for you, are there any bands you are dying to collaborate with on the next album?

R] “Well, Axl Rose has been bugging us for ages…  But we can’t wait another twelve years or whatever to get an album out! [laughs] We’re not really a collaboration type of band. We’re a bit too headstrong at the moment to listen to another band or musicians’ ideas. May be by our fifth album when we’ve hit writers block, we call in a whole lot of help!”

S] You’re starting to build quite a fan base in the UK – tell us what the strangest thing you’ve ever received from a fan?

R] “Maybe a year or so back, one of our fans brought us cakes.  Unfortunately they weren’t laced with anything. I think they just thought we needed fattening up a bit. Mostly they just try and take our stuff. One fan at Newcastle 02 Academy grabbed my leather jeans by the crotch and wouldn’t let go until she tore a big patch out of them.  My guitar needed well positioned for the last few songs.”

S] And… what would you most like to receive from the fans?

R] “Their attendance at our gigs! We never take for granted that people will just show up cos we’ve booked a tour.  We know how hard it is for people to find some spare cash to go out so we truly mean it when we say it means the world to us to have their support.  Without them we are nothing!”

S] Any expectations now that the CD has been launched? Time for a well-earned break or straight back to business?

R] “We’ve had a bit of a break through January to this month – which is our first in over two years but when we say break, we mean break from touring. We’ve been recording, doing press and planning stuff for the UK tour. Our new EP, ‘Hasta La Victoria Siempre!’ comes out on April 4 and then we will be back on the road permanently.  Except this time that road will branch into Europe and Scandinavia for sure!”

S] Room 13 is an empty white room where you are to be confined in for a week; each member of the band can take two items and two items only, what would they be?