Hocico is one of the most hard working bands on the worldwide industrial and dark electronic music scene. We speak to vocalist Erik Aicrag in London about touring in the UK last year and his plans for this one… 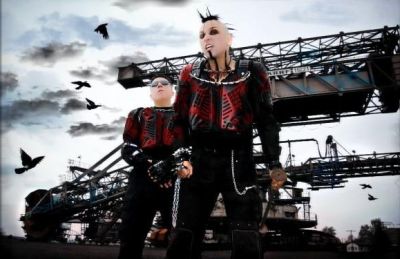 “This project has a life of its own”

S] What is your attitude to industrial music now as we approach 2011?

Erik] “I like it mixed with coke or on the rocks. Industrial music has changed and evolved through the years and will continue to be relevant in 2011 and for a long time”.

S] How have your aims and goals for the Hocico project developed over the last year?

Erik] “The band is doing pretty well, we have accomplished the goals and expectations we set for this year, It feels great to be back with a new album.”

S] You have talked in the past of helping and producing new Mexican music. Can you give us some examples and who would you recommend to our readers as a Mexican act to truly look out for in the future?

Erik] “Racso [Agroyam, programming] just helped producing the first album from the band, Kriminal Minds; There is a Mexican band called Maldito that I really like because it sounds just like us, when we were 18-years-old.” There is a new record label in Mexico City called Fiat Sonus that is worth checking out, they have interesting new and old bands.”

S] How do the ideas that you both contribute to your side-projects Rabia Sorda and Dulce Liquido influence the writing process for Hocico, if at all?

Erik] “It is hard for us to see how much goes from our solo projects into Hocico, We both make use of all we learn on our solo works in the band but when we get together we always end up doing what we do, what I mean is that we have a special way to interact and we end up doing the ‘Hocico thing’, which is good for us.”

S] Has living in Germany had any influence on the writing process?

Erik] “I used to think Germany did Influence our music, but when ‘Tiempos De Furia’ was out and I listened to it, I instantly thought ‘this sounds just as when we were recording in Mexico’ though it was a fantastic experience to record in Germany, in this moment, I don’t think the fact that we did it there really influenced much of the sound on this last album. It seems Hocico has a life of its own no matter where we are.”

S] What does having the opportunity to play shows in the UK mean to you?

Erik] “England is a devoted musical country and English crowds are not easy to impress because they have just about seen live every band that is touring around the world, but I know that if they like what you do, their love is honest and for real. English crowds are without a doubt some of the best you could find in the world. We love them.”

S] Will you play other shows outside of London in the future – any chance of a full UK tour?

Erik] “We would love to and we will try to play more shows in the UK in the future. Last August I toured the UK with Rabia Sorda along with Combichrist and it was a extraordinary experience, I really saw that the scene is very lively and supportive all over there.”

S] How does ‘Tiempos De Furia’ expand and develop on the themes of your previous record?

S] Could you perhaps share some of the inspiration and meaning behind ‘Dog Eat Dog’?

Erik] “We live in a society driven by financial success in an evil monetary system, where most of the people only fight for themselves and hurt the others. ‘Dog Eat Dog’ is an ironic song that deals with the ‘rat race’ of society that humans get themselves into, without even wanting or knowing.”

S] There seems to have been a shift back to the ‘Signos De Aberracion’ era of Hocico, in the style and overall feel of the new record – was this a conscious effort?

Erik] “Not really, it came out naturally this way. I think the fact that we got to work together again in the studio had this ‘back to the roots’ impact on the songs and on the overall feel of the album. Our previous two releases were mainly made over the internet, but this time we got to work the way we used to when we both lived in Mexico City.”

S] The art for the record is fantastic, can you tell me what inspired that?

Erik] “The cover was designed by User in Germany, we talked to him about the concept of the album and more or less what we wanted and he really connected very well in a mystical level again to create the artwork. It represents graphically the times we live in, ‘Times Of Fury’ – it seems the time is running over to turn things right in this world full of fury that generates death.”

S] What are some of your biggest plans for this year?

Erik] “For the first part of the year we will continue playing live with Hocico mainly in Europe but we will tour Mexico and South America too and probably USA at some time in the Autumn. A second single from ‘Tiempos De Furia’ will be out some time in early 2011. it will include some unreleased material and some mixes along with a video clip. I’m working on a new Rabia Sorda EP and it looks like it will see the light of day in early 2011 too. Racso is working on new songs for Dulce Liquido and he is planning to release that soon.”