Just when we might have sunk further into the gaping abyss created by life’s demands, we, well specifically, this writer in particular, who could well be the biggest fan of hardcore in the North (yeah, the arrogance is flying en masse here, we realise) found out that the mighty and poetic Expire were playing in Leeds last month. That was an opportunity like no other, and one that left this fan starstruck to all hell. We sit down with Josh Kelting [vocals] and Zach Dear [guitar] in their punk as fuck tour van, and talk about the difference between UK and State tours, what hardcore means to them, and the new album ‘Pretty Low’, which left their family members worried. 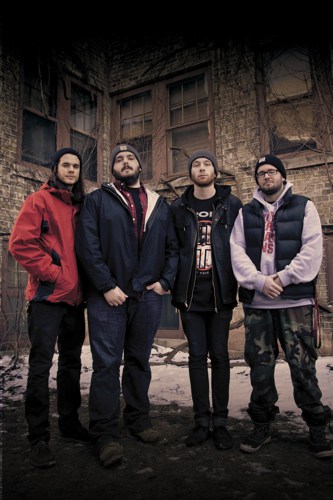 First, the three of us write a love letter to the genre. Zach says, “For me hardcore is an outlet, whether that means broken homes or people and their family, or you’re unhappy with a lot of things. I don’t know many people who got into hardcore who came from the perfect upbringing. That for me is a huge reason why I got into hardcore, and why it’s still important to me.” Hell yeah. Being in the early, unsettling, tense, nervous and unhappy phase of life, it’s difficult not to act like a sycophantic yes-man right now and agree with every word. Vocalist Josh Kelting tells us about his lyrics: “I’ve always written a lot and hardcore is a way where I’ve been able to put the poetry in motion. I can say whatever I want and feel comfortable doing it.” Zach continues, “I feel like people start to get out of it or fade a little bit once they stop having things to be mad about and they grow up and get their routine. Whatever you’re unhappy with, hardcore is a place where you get it all out and it doesn’t matter if anyone thinks you look stupid or that you’re saying stupid shit, it’s just a place that’s really cool and open, and even when it seems like it’s getting cliquey, the ones who stick around are the ones who are above that and don’t need to try and segregate people out.” Sometimes, the world well and truly segregates us, but does that judgment matter at an Expire, or (insert any hardcore band in the world here) gig? No way in hell.

Talking of open places and open minds, we reflect on the band’s previous album ‘Pendulum Swings’. Josh says, “It’s a hard record to follow up. We were really happy with it, a lot of things happened as soon as it came out. A sophomore record after that is stressful.” Damn, it was dark too, but from the sound of things, the new one is gonna be even darker. Zach tells us that “I had my dad proof read the lyrics for our new record, and I definitely got the ‘is everything good? This is some pretty depressing stuff, who wrote this?’ response, and I was like ‘Mostly Josh, some me.’ and he’s just like ‘Well, if you guys need anything,’ and I was like, ‘Man, I really shouldn’t have gotten my dad to proofread this.’” It seems it helps to be writing dark music in a heavy genre, as Josh tells us, “I don’t think my family can understand what I’m saying. All they know is that I curse a lot on the record.”

We can’t resist but to ask about the new album. Josh tells us that, “It’s done. We’ve been listening to the masters today” while Zach divulges the writing process: “For ‘Pendulum Swings’ and everything before that it was a little different than for ‘Pretty Low’. Musically other records have been more of Marcus our drummer and myself writing. ‘Pendulum Swings’ was pretty fifty fifty between us. The less people writing sometimes it’s better because you get a more cohesive sound, whereas if you have four people writing music you’re gonna have four different ideas at the same time and it’s too many cooks in the kitchen. For ‘Pretty Low’, musically it’s mostly songs that I have wrote, and obviously they’re Expire songs, I’d never say they’re completely mine, because I bring in things to practice and they get tweaked and they become everyone’s, but I did more of the writing. Caleb [Murphy] did a little writing for it, and Marcus [Boldt] wrote a couple of things here and there but we’ll usually come with riffs and parts we really like and just build on them in practice, get songs done, and then leave and come back, record them at practice, everyone will listen to it, then the next time we come back, we’ll kind of say, ‘Okay we’re happy with that,’ or ‘what were we thinking, this isn’t great’. Then once we have a final thing Josh will listen to it and do his thing over it. So writing for ‘Pretty Low’ was definitely different to anything else we’ve done. It sounds good, things changed, not necessarily for better or for worse, just different.”

Now let’s talk roots. Josh tells us of his lyrical influences, or rather the lack thereof, “I’m not sure what really inspires me lyrically. Most of the time it just kinda happens. A lot of times I get a little more creative when I’m stressed or feeling anxious. It’s mostly just stuff inside my own head, obviously things happen around me that give me an idea, but I couldn’t say what really inspires me.”

We turn this around one-eighty now with a chat about the different guys on the hardcore scene, from separate corners of the world. It’s impossible not to give a shout out to those guys! And get some recommendations too, of course. Zach explains how, “Last night we checked out Below in Manchester. They only played like four songs but it was the shit, man. It was great. There’s a lot of sick UK bands that I feel get looked over. It’s really hard to be a band from out of the country, and get recognition in the states, because hardcore is so over saturated there, but a lot of the UK bands deserve to have more ears on them. I love Survival, that’s one of the coolest bands that’s come out in the last five years. But they don’t get looked at in the states. It sucks. It’s hard for people to become fans of a band where the odds are that they will never see them. It’s easy for American bands to go places, but there are very few that have crossed into America rather than America onwards. I know that Broken Teeth are supposed to be coming over at some point this year, which is great for them, that’ll be fucking awesome.” On the other hand, the UK is lucky to have bands from the states coming over, which couldn’t be more awesome. This writer has about a thousand bands on the list, and chances are they will never come over. Damn this humungous bastard of a world. Maybe Josh’s next few words will inspire some of them to get their arses over here. “Touring in the UK and in Europe is a lot different, it’s a little more hospitable. I think they have more of an appreciation for hardcore bands. When touring in the states there’s always a punk mentality, and you might get some water, you might get a PA that works, whereas here you get fed, people are really nice to you and give you a place to stay, but touring the states is a different story as far as that goes.” There you go, multitudinous untouchable hardcore bands. You don’t need money. Head over here with your instruments, and we’ll feed you, and afterwards we’ll give you a bed. No, not in that way.

Coming over to the UK for the third time is definitely a staple in Expire’s success. Not that Britain is an amazing place, because it definitely fucking isn’t, but travelling all that way and still drawing a huge crowd is certainly a reminder that the music is speaking volumes. In regards to this, we ask the guys if anything has changed since the beginning. “Personally I like to think that I’m still just as hungry for the band to progress as I was five years ago,” says Zach, “I remember doing the demos, coming out for practice – I lived in Chicago at the time, so I’d take a bus up to Milwaukee – meeting Josh at like our fourth practice and just going from there to sitting in my living room and burning fifteen hundred demos by myself. All I thought about then every day was the band, and that’s still what I think about.”

A great message there. Before we bring this to an end, Josh gives a shout out to midwest bands Bent Life, Black Ice, Out of Time, and Cross Me, and Zach reveals the plans for 2014. “The new record is all we’re concerned about. We’ll have it out in June and probably be back over before the year is out.”