Lord Of The Lost

Home » Lord Of The Lost

Following his band’s UK tour in support of Acey Slade And The Dark Party, we talk to Chris Harms, vocalist for German goth metallers Lord Of The Lost about the tour, personal inspirations and plans for the future. 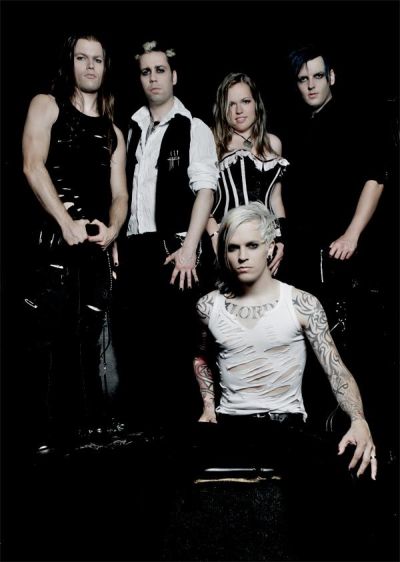 “I always have fish and chips when in the UK!”

S] What did you most enjoy about the UK tour?

C] It was a blast, so I am looking forward to come back again soon, hopefully.

S] What did you enjoy when you were over here?

C] As always when I am in the UK. fish and chips, lots of Strongbow and upsetting Tesco stores by night.

S] Do you have a favourite place to write and are you inspired by specific locations and people?

C] No, I am not the type of songwriter that sits down somewhere for writing. This happens in the back of my head all the time, I am not in control of it.

S] Can you talk us through the inspiration for one particular track, ‘Dry The Rain’?

C] Well, as I said, I really don’t know where those ideas or inspirations are coming from to be honest. ‘Dry The Rain‘ though, came to me when I sat in my car, driving through Berlin, very upset and sad about the usual problems that guys have with girls! I saw the terrible weather that looked exactly like I felt, and I just needed ‘some wind to blow the clouds away’. This sentence started to spin in my head, and I began singing – maybe after 10 minutes I had a song that was ready for recording.

S] What has been the band’s defining moment so far?

C] The album release and all the attention we got at the Wacken Open Air, Wave Gotik Treffen in Leipzig and at the M’era Luna Festival…

S] What keeps you inspired to make gothic music in 2010?

C] Is it goth music? I don’t know. I do not try to make goth, or metal, rock, or whatever. I just write songs. And this is what comes out of me when I try not to think about it and just let it flow.

S] What is the band’s biggest challenge right now in terms of getting the message out there?

C] Money. It’s all about promotion. The more money you have, the better videos or productions you can make and the more money you can spend on promotion – then more people are able to see you. So, I think in the end money is the most essential way to get the message out there.

S] How have your goals and aims with LOTL changed and developed since the project began?

C] In the beginning I only wanted to produce some songs for myself, to let out what I had to get out of me. Meanwhile my main goal is to touch people, not physically…well, maybe sometimes!

S] Chris, how is the inspiration different for LOTL than with your other, more industrial-focused side-projects like UnterART for example?

C] I wrote a lot of songs for UnterART. The main difference is, that Grigory Feil gave all those songs the electronic touch of the tracks, but the songwriting basis is pretty much the same. It’s only a different kind of production.

C] Touring and trying to finish the recordings fort the second album.

S] How do you think that the next material you produce will showcase the evolution of LOTL?

C] In the end it’s all different than I planned it I guess. Some things will be different for sure – much lower guitar tunings, the sound in general will be much harder, but the songs will be even more catchy and poppy at the same time.