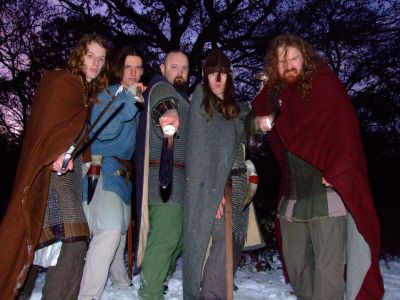 “Our type of music is not fashionable in the UK”

S] How did you choose the name Ravenage?

G] When I was in Heathen Foray [folk-metallers who disbanded two years ago] I was writing a song entitled ‘Foretelling The Raven Age‘, harking back to Pagan times when the raven was one of the symbols of the Norse God Odin, and I just liked the sound of it.

S] How would you describe the musical style of Ravenage?

G] [We’ve got elements of] folk and melodic death metal in there, with bits of black metal, power metal and traditional metal.

S] How has the band developed musically since its beginnings in 2008?

G] The music has just got better and better as we have got more practiced at it. We now have a more mature sound. Its a constantly-improving relationship between the band members. It can be hard to combine ideas when so many of the band members are great songwriters!

S] All of Ravenage’s production is done by its own members. What would you say the advantages and challenges of doing your own production are?

G] The advantages are that we can get it how we want it to sound, and in our own time. There is no pressure of studio time limits, and doing it in our own environment is less stressful. Because we are doing it for ourselves, we put more effort in than a producer who would just be doing it as another job would. There are not many disadvantages, as we have quite good software and microphones.

S] Ravenage contains Viking themes and references to the local area of East Yorkshire, as well as Northumbria. What would you say the main theme of the band is?

G] There are many songs about the Vikings in England, but other songs refer to Roman and pre-Medieval times, mostly between the fifth to eleventh centuries. Some songs are about certain situations, such as the Battle of Stamford Bridge, which received three months of research. We always thoroughly research events we sing about as historical accuracy is important to us. However, our songs are on a variety of themes and are not always historical: battles, the end of the world, starting afresh and personal life experiences are some good examples of what we draw upon.

S] What is the theme of the new album?

G] Unlike our 2010 EP ‘Hardrada’s Fall’, our new album ‘Fresh From Fields Of Victory’ is not a concept album. There will be between 10 and 12 tracks, ranging lyrically from the Roman Battle of Teutorburg, to Ragnarok [the Viking end of the world], conquering your inner demons, and of course a drinking song.

S] What has been your favourite gig so far, and are there any gigs you are looking forward to?

G] My personal favourite gig was playing at Man’s Ruin Bar in Portugal in 2009. It was really different to other gigs we had done and the crowd were fantastic. I am really looking forward to playing in Germany next year.

S] Recent statistics from MySpace visits show that you have quite a following in Germany, and numerous other countries, ahead of the UK. Why do you think this is?

G] Our type of music is not particularly fashionable in the UK. The UK press tend to push whatever the next trend is, regardless of ability. There may come a time when folk or Viking metal becomes popular in the UK, thanks to bands such as Turisas, Ensiferum and Amon Amarth who have made it to popularity here. However we have not had the kind of exposure that they have. Bands like that are more popular in Germany, Scandinavia and the USA. We are currently in conversation with a potential record label who are based in Germany.

S] What would you like to see the band doing in the next year?

G] [We will be] releasing the new album, doing a full UK tour, performing some continental dates, playing at some major festivals, and working on another record, which we have already started.