Skarlett Riot, a four-piece female fronted up-and-coming rock band who are ready to take the world by storm! Already they have got rave reviews from the press it seems this North Lincolnshire band is making a good first impression. Melanie Parkin talks to Skarlett Riots lead vocalist Skarlett about their ideas, influences and plans for 2011… 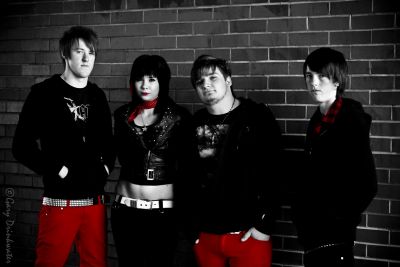 “Getting the boys to wear red skinny jeans on stage is hard!”

S] How did you become the band you are today?

Skarlett] “Oh… [laughs] Where do I start? We met around four years ago; our drummer [Luke] and guitarist [Danny] are brothers. Tom [bass], Danny and I were all in the same year at school together. I was in the same music class as Danny and overheard him saying he wanted to start a band. At that time I was already doing solo music competitions but really longed to join a band. The two brothers began jamming together in their tiny conservatory soon we all were in there together. So that is where it all began!”

S] How did you get the name Skarlett Riot, I know you were originally called Fuzion?

Skarlett] “We came up with Skarlett Riot pretty much off the hook. The band was originally called Fuzion, but we thought that was more of a covers band name. It didn’t really express ‘us’ as a band and our music. Skarlett is meant to express the girl in the band and the Riot is the boys!”

S] Well, you and the Riot have a striking sound what sort of influences do you have?

Skarlett] “That’s a difficult one. We all have different influences, which is what makes the band so interesting! Ranging from Halestorm to Bullet For My Valentine and even AC/DC!”

S] You’ve been compared to the likes of Courtney Love and Guns ‘N’ Roses how does it feel to be compared to such big names?

Skarlett] “Amazing! It’s great to get some awesome feedback on our music, playing our songs to people is what we love the most. Hearing that kind of thing really makes us proud of what we do!”

S] You’ve supported some amazing bands so far, such as Deaf Havana and Heaven’s Basement, has supporting great names taught you anything?

Skarlett] “Yeah definitely, to believe in yourself and what you do because when you put your heart and soul into it, anything is possible!”

S] You have as a band have a very distinct style on stage is this just for stage or do you dress like this off stage as well?

Skarlett] [laughs] “No just for stage! Getting the boys to wear red skinny jeans on stage is hard enough work! Off stage I’d say we dress normal-ish.”

S] What’s your best moment so far being part of Skarlett Riot?

Skarlett] “That’s so difficult! We’ve had many great times and great things happening but it’s definitely all about performing live and playing to people who appreciate your music so I’d say… maybe the first time we played a show were the full crowd sung our lyrics back to us. What an amazing feeling that was and is when it has happened since then!”

S] What’s life like for Skarlett Riot outside of the band?

Skarlett] “Pretty normal really! I’m at university studying music, our drummer’s finishing his last years at school and our other two members work. It tends to be at night when it all starts to get messy! [laughs] Most nights consist of band rehearsals and shows so we are together a lot. A lot of my life is spent with the band!”

Skarlett] “2011 is hopefully going to be an exciting year for us. We have some awesome support slots for bands such as; Taking Dawn, The Crave, New Device and Zodiac Mindwarp. We are currently booking a mini-tour for summer which should be quite cool! We are hoping more radio play and magazine coverage will happen, so any stations or magazines out there, give us a shout! Earlier this month, we have had pretty cool reviews from the press.”

S] So tell us all about your up and coming tour?

Skarlett] “It’s on the ‘down-low’ at the moment. We are still finishing booking venues. It’ll be most likely a week or two tour in summer, based within the UK. We are trying to get a mix of new venues and our favourite ones, we have played so far!”

S] Finally let’s here all about your mini-album? What are we to expect?

Skarlett] “Ah yeah. Our first mini album, self-titled ‘Skarlett Riot’ – definitely an attitude rock album! We have our first single, ‘Never Believe It’ which I’d say is the anthem track of the album. Other tracks include ‘Take It All’, ‘The Answer’, or if you fancy a softer sounding track try ‘Draw The Line.’ It is out now on CD available to buy at any of our shows which you can find on our MySpace or website. Also it is available on the likes of ITunes, Spotify, Amazon and many more.”