Aag are an innovative and diverse Pakistani rock group with a sound that mixes all of the best melodic bits of early Incubus with the heavier end of System Of A Down. We chat with guitarist and vocalist Haroon, and drummer Usman Sheikh about the band’s music, values and plans for the future. 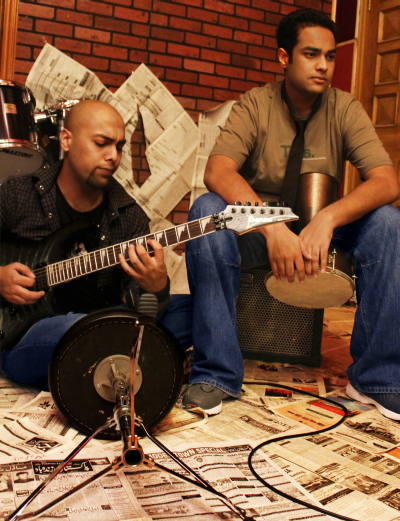 “Language is not a barrier to artistic expression”

S] We can see on your Facebook page that Aag have been formed for almost six years now – so you are not “new” to the scene, so to speak. You’re brothers and have already shared in the success of a hit single in a variety of charts in your native country, Pakistan. What did it take to get to where you are now? Ups, downs – and are there any lessons learned you would like to share?

A] “We’re basically people who want to make music. It took a lot of sleepless nights full of hard work, banging our heads against the wall until we thought we had something. There have been ups and downs. It’s been a bit of a rollercoaster ride really, from being completely unaccepted, broke, and performing at dives, small rooms that didn’t have enough space to step on someone’s torso. Where ever we could perform we would, often with borrowed instruments.

We remember hazing the first years in college for money to get to gigs where we were supposed to perform that night. It’s been a thrill though, a few places crowds boo-ed us when we were getting on stage, but at the end of our set they wanted an encore. That kind of a response made it all worth it. What we’ve learned is, when you do your thing and keep at it, and share it with the world, things tend to work out sooner or later.”

S] For us, some of your tracks echo sounds of Incubus, A Perfect Circle and System of a Down. Where do you see it going in the future?

A] “That’s the first time anyone has compared our sound to any of those bands! We like not to limit ourselves and let the whole process of making music flow naturally. It could honestly go anywhere, as long as it does a good job expressing emotions.”

S] There’s an album on the horizon, and as a band that’s been growing for, are there any underpinning philosophies (personal or as a group) in your music, your attitudes, or your beliefs that may come through in the upcoming album’s music, artwork or lyrics?

A] “Self-expression through musical experimentation and total creative freedom to find a new sound free from genres. Change is constant, everything is subject to change through time and this process is natural. Our music is what we believe is the much needed change in the social thought of the world.”

S] In terms of an image for the band, your video for ‘AAG’, which was directed by you, with your degree in film production; projected a very strong, calculated and clean image which focused clearly on the music in an artistic way through a performance-led video. This retained the epic feel of the music and reinforced this visually. Were there any conscious decisions you made when producing the video in terms of defining the band on screen, and could you tell us about the process of making the video – from concept through to the finished product?

H] “Anything I create tends to have a very instinctual process. My basic idea was to have a performance-based video. There wasn’t much of a storyboard to begin with, just rough ideas. The feel of the music gave me the visual idea of the direction I wanted to go. Production focused mainly on the ‘mise-en-scène’. The equipment, lighting and the location were conscious decisions to express what I wanted to. The video was shot on a RED one camera since it is the only option other than film with such control in post.

A lot of experimentation was involved in the whole production of the video, especially in the post-production phase. I viewed all the footage and began with a rough cut edit based on how the music worked with it. The next stage was to convey the meaning through colour so, special effects were added and a theme was designed. I kept in mind the feel of the sound, the scales used, and the lyrical content during the treatment in order to communicate the feel and meaning of the music. The projected image was the way it worked out in the end.”

S] We’d like to touch on the language, if we may, of your music because although you don’t sing in English, you all speak English. How was this decision made, and what does it say about the band? Would you suggest foreign fans to worry about not understanding the lyrics? Is anything lost, and for any English fans, would you be able to give us a short summary of what your song lyrics are about?

A] “The lyrics are about the Indo-Pak partition in 1947. It sheds light on the emotions of the masses back then, and relates it to their current feelings and the state of affairs. The sub-text is the concept of becoming, the realisation and the need for change. The name AAG itself is the Urdu word for fire, an element of nature that never stays the same shape, but evolves constantly. Our music is in Urdu because we live in our native country of Pakistan. The fans physically closest to us understand the language, and honestly, language is not any sort of barrier for understanding artistic expression. We intend to release a few tracks in English in the future.”

S] Do you have any plans for European or world tours in the future? Where do you see the Pakistani music industry fitting in with the global music industry – particularly for more modern bands such as yours which does not fit the traditional “eastern music” mould.

A] “We as a band aspire to reach people globally. If language is not a barrier for artistic expression the why should geographics be? The Pakistani industry has some amazing acts which can certainly blow peoples mind’s anywhere in the world. What we lack is exposure. Also, the western music mould has made its way into this region over the past few decades quite successfully. It can certainly happen the other way around.”

S] Which is your favorite Aag song so far, and why?

A] “Our tracks are the expression of the different emotions that lie within us, so its impossible to pick a part of our personality which we like the most! Although, ‘Kafla’ is an amazing live number. We all just love the energy in that.”

S] As you were growing up, did you always expect to be in a rock band as brothers? Could you tell us more about the dynamic between you both?

A] “This is what we wanted to do for as long as we can remember. Our dynamic? We tend to understand each others points of view before the other says it. This strange telepathy between us will forever remain a mystery.”