In this brand new artist spotlight, we talk to London alternative rockers Bleech who mix hard-hitting and addictive melodies for an effect that conjures up all the best parts of 90s rock, and yet, manages to bring that sky-rocketing feel-good sound smack dab into 2012. We chat to Jen O’Neill (vocals, guitar), Katherine O’Neill (bass) and Matt (drums) about the band’s origins and the future too. 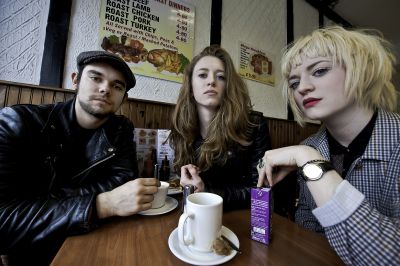 S] How is it being in a band as sisters? Does sibling rivalry ever get in the way?

K] “[laughs] Well… what can I say… yes we do argue, naturally. But on the positive side we forget about them even quicker! But our petty arguments never get in the way, unless Matt has something to add!”

J] “Matt is – without sounding corny – like a brother as well. I think Katherine and Matt argue like siblings more than we do! It’s very funny, especially after a few weeks on tour trapped in the van!”

S] You got together when you were young, do you think starting early has helped you get where you are now?

M] “Definitely. It’s quite incredible to see, even in the four odd years we’ve been together, how much the music industry is constantly changing, and we’ve learnt that you have to change with it – to an extent of course; we don’t have laptops yet! When we first got together as a band and Katherine was only 16, we spent the first year constantly gigging. We must have played over 100 gigs that year (about 99 of them in Camden) with help from a local promoter who was happy to have us back every night! You can spend hours and hours in a rehearsal room but the only real way you’re going to improve is by getting out there and playing live. We are still learning our stage craft!”

J] “Katherine and I grew up surrounded by music; our dad is also a musician so it’s kind of in our blood!

K] “I don’t think it did much for my school grades though!”

S] Do you think it will change the dynamic of the band if you hit “the big time”, how will you stay grounded?

K] “I think if we had of been signed three years ago, Matt would already be in rehab, Jennifer would end up a judge on ‘Britain Has Talent… Again’, and I’d be begging for my old coffee shop job back! But we’ve learned so much in the last year or so, being self-managed and doing these self-releases we’re kind of not fazed by too much anymore! We’re taking the stairs rather than the lift so it’s nice to see things gradually grow, and hopefully when it gets to that stage we won’t even realise!”

S] Your lyrics on the album are often very catchy and upbeat, do you have this mood and style in mind when you write?

K] “Some of the songs are the first we ever wrote together as a band, so there’s a lot of excitement and youth that comes through.”

J] “I don’t think it was intentional as a theme for the album; it’s just the way all the songs came together. The track ‘I Wanna Be Me’, which is the shortest, fastest and possibly one of the most catchy songs, came together during one of our worst rehearsals where we were all really frustrated and angry for some reason and just thrashed out this song!”

S] You’ve already toured with some reputable bands the likes of The Joy Formidable and Wolfmother, have they given you any good advice?

S] At the moment you’re playing a lot of small venues around the country, is there anywhere that you would love to play in the future?

M] “My absolute dream venue to play is Brixton Academy! I’ve seen so many great bands there! It’s the perfect size and I think the best sounding venue in London.”

S] What are your aspirations for the band for the next year?

M] “We will be releasing our debut album this year which is exciting and we are already demoing new tracks which we can’t wait to record.”

S] And finally, is there any advice you would pass on to any young musicians hoping to start a band?

J] “Nothing happens over night! The best advice I could give any one starting a band is to just gig, gig, and gig a bit more! It’s the best kind of rehearsal and it’s the best way to learn your stage craft. Just smother yourself in music!”

K] “I think some advice I have to give myself sometimes is to not stop going to see live music yourself. You can easily become so obsessed with what you’re doing, that you forget that there’s so much music out there to go and see and be inspired by…or sometimes not so inspired by… [laughs]”