Following the break-up of cult Industrial metallers American Head Charge former bassist Chad Hanks has been busy gathering up momentum for his new band featuring the former members of AHC (minus ex-vocalist Cameron Heacock). With a new vocalist being tested at the time this piece goes live, things are looking positive. We caught up with Chad recently to discuss his former band and the future for his latest project. 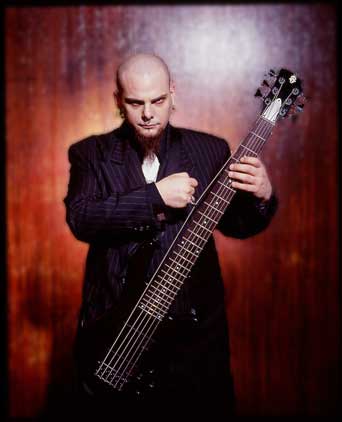 S] Now that American Head Charge has been broken up for a little while, what is the mood like in the band camp?

Chad] The general mood is one of optimism and excitement. I just got back from San Francisco two days ago; I was working with someone I’m hoping will be our new singer. He’s got an incredibly versatile voice and we seem to work really well together. We’ve been communicating and trading demos via phone and internet for the past six weeks or so, and it was great to find out that we get along with each other while in the same room; You never know about these internet hook-ups, right? We are definitely on the same page as far as what we don’t want to do, which includes staying far, far away from anything in the meathead, jock-metal category. What we’re going for is definitely heavy, but without any of the Ozzfest or Hot Topic bulls*it. That s*it has been done to death and I personally want no creative part of it.

S] Has the creative process changed at all from the Head Charge days?

Chad] We don’t really know yet. With Karma [Cheema] in LA, Justin Fowler and I in Minneapolis, and this new guy in San Francisco, it’s a whole new ballgame. Technology obviously helps; we couldn’t have done this ten years ago. We are working on getting into a room together within the next month to see what happens when we play live as a unit. We have a lot of material to work with at this point, so we’re ahead of the game as far as that goes. I’m not too worried.

S] Can you tell us the name of the new project and why did you decide to change it?

Chad] There is no name yet. American Head Charge was the brainchild of Cameron and myself. To me, it would feel just plain awkward to go by the AHC moniker. It would be a misrepresenting of this new baby. This band is not going to be AHC part two in any way, shape, or form. We want to change everything, from the guitar tones we use to how we are presented to the public. This is a whole new thing, and will definitely not be a cookie-cutter metal travesty. I don’t want to contribute to an already rampant problem.

S] Can you tell us about the sonic direction of this new material – are you going to continue to blend Industrial elements with metal?

Chad] Well, first off, I wouldn’t call it metal. I am generally very tired of what is called metal these days. It’ll be heavy, but without the trappings of the current metal genre. As far as electronics go, they will of course be there; it’s a huge part of Justin’s musical background and mine. I’d like to think that we’d be using the electronic element in a different way without falling back on tired Industrial clichés. Personally, I have to keep an eye on it, ‘cause I could sit and write Al Jorgensen-style songs all fucking day long, but it wouldn’t be the true musical me.

S] Can you tell us about your favourite new track and the inspiration behind it?

Chad] The more we work on new stuff and the more time that passes, the more I can see the error of my ways, so to speak. I’m probably ditching about half of the stuff I wrote over the past couple of years, at least for this new project. Like I said, this is a different beast and should be treated as such. It’s hard to let go of the reigns on stuff you’ve written, recorded, and lived with for the past two years, but it’s a necessity when opening your material up to new band members and a new project. You have to unhook the life vest if you want to see God, no?

S] As much as you can, tell us about your best candidate for the vocalist’s position and how he is fitting in?

Chad] All I can say is that we have locked on to one particular individual. No names yet, though. Keep an eye on my blog, AlmostSemiFamous.blogspot.com, for any updates that occur. That’ll be the first place it’s posted.

S] We know money is tight at the minute but back in the Head Charge days you guys had some pretty successful UK tours (we enjoyed your York show) – how possible will it be for you to come back here once the new band is active?

Chad] Well, I think that not going to the UK would be a huge mistake. We have an incredible fanbase there, and I definitely see us back there eventually.

S] What are your best memories from being over here?

Chad] Well, I have never done a UK or European tour not constantly drunk and / or heroin-ed out, so my memories are very fuzzy, to say the least. I blacked out the entire day the first time we did the Download Festival. I don’t remember a single second of that day. It’s too bad really; I’ve seen the video, and it’s incredible. But the first thing that comes to mind is sitting in the downstairs lounge on a nice, cool day…both doors open, smoking hash and listening to Elbow. The Kerrang! Awards and the hotel debacle that followed is also a pretty good story. The moral of that story is don’t ever do coke with Fabrizio Moretti in his hotel room if you don’t want to listen to his band The Strokes on repeat.

S] How has your attitude to the music industry and your place in it changed since you began your career?

Chad] Even though I had read, viewed, and personally witnessed bands and friends getting fucked over by record companies prior to our getting signed, when it happened I somehow conveniently forgot those facts. By nature I am a very trusting soul. I’ll give you the benefit of the doubt until you f*ck with me, and even then I’ll probably give you another chance. I was so excited to finally be in the game after 15 years of being in bands and wanting to succeed in a professional arena that my bullsh*t detector took a backseat to the circus that was winding up. Adding to this, we were continually mismanaged, lied to, led on, and put on the shelf. There’s still lawsuits floating around out there that were not directly our fault, but we were the ones left with our dic*s hangin’ out in the wind. Sufficed to say, I am much more suspicious of anybody in the industry, especially anybody that wants to help us. It’s a sham, everybody’s got an angle. Hopefully I won’t forget this little piece of info in the future.

As far as our place? Jesus, I could go on forever about that. After the first year of touring ‘The War Of Art’, I continually told our manager(s) that we wanted to do more ‘esoteric’ tours, for lack of a better term. I always felt like we had the square peg-round hole syndrome. I hated most of the band’s music that we toured with. As soon as the initial excitement of touring wore off, I realised that I would probably never go to any of the shows I was playing, yet here I was on the same bill with these bands. It’s kind of weird realising that most of your audience has completely missed the point. In fact it’s very, very frustrating. This point was driven home even more when we started to go through this recent singer audition process. Some of the most lunk-headed, bland, bulls*it I’ve heard in a long time was sent to us. They almost all sounded the same and it was boring as fu*k – blatant rip-offs of (insert band on Ozzfest here). When the new guy sent us his demo and picture, it was like the heavens opened as if to say, ‘Don’t worry kid…somebody out there gets it’.

S] Can you explain to us as much as possible your most difficult moment over the last few years and how you came through it?

Chad] I’ve had a few. Bryan [Ottoson] dying on ‘The Feeding’ tour, obviously. Then realising that if I didn’t get clean that I would never be able to dig myself out of the hole I was in, and it was a deep, dark fu*king hole. I found out that what I thought were heart attacks were actually severe panic attacks, and that I needed professional help in dealing with them. My father also died the first week of the ‘Can’t Stop The Machine’ tour. Also, having to tell Cameron, at one time my best friend, that we couldn’t wait for him to get his act together any longer and the list goes on and on.

So, how did I get through these things? I hunkered down and either helped myself or asked a professional to help me, because nobody else around had the tools to help me, including myself, and nobody was going to come rescue me every time I fucked up. The same situation has been the downfall of certain persons that shall remain nameless. When people finally get tired of rescuing the junkie or alcoholic, it’s then up to him or her to be proactive and figure their own sh*t out. And if you’re successful, you end up an even stronger person.

S] You are a very creative person, so what have you been doing over the last couple of years aside from music?

Chad] Music is pretty much all I do creatively. In the past I’ve tried writing, painting, other creative endeavours…but music is what speaks to my heart and makes me want to live. I feel lucky that I have such an amazing gift in my life. I couldn’t imagine growing up and not having a passion to follow, regardless of how many fuc*ed-up corridors it takes me down. It has always been worth it.

S] Personally, what has been the defining moment of your musical career, thus far?

Chad] On paper, it’s probably recording with Rick Rubin in the Houdini mansion. That was an incredible turn of events for a 29-year-old-almost-never-was, you know? I had been playing guitar and bass, seriously, for 23 years at that point, in multiple bands, went to three schools for music and it was all that I did. And even though we were huge in Minneapolis before we were signed, it could have easily been all for nothing. We were lucky; we were in the right place at the right time. But honestly, I like to think my great defining moment hasn’t happened yet. It helps keep me going.

For more information visit Chad’s Twitter and the links.