For our latest band spotlight, we go back to our roots and talk to one of the most exciting pure industrial acts to come out of the UK in recent years. Niall Robertson (programming, vocals and production), Ste Houghton (programming and vocals) and Adam “Hig” Higginson (programming, synth and guitars) of Lancaster’s Cyferdyne (formerly Cyberdyne) talk us through their ideas, inspirations, the state of industrial music and err… the challenges faced when comparing eggs to doors. 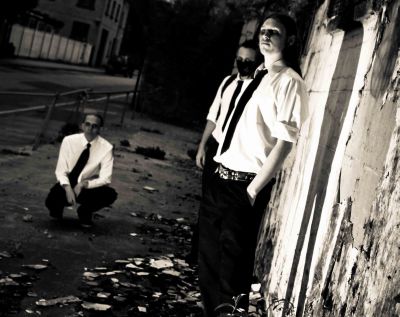 “We have such a stringent ‘quality assurance procedure'” – Niall Robertson

S] How did Cyferdyne form?

Ste] “Cyferdyne formed at the end of 2010 when the three of us were asked to put some music together for an upcoming EBM and industrial night. We met up and started throwing some ideas around and found that we really enjoyed both the writing process and, the music that we were creating. We were also lucky enough to get some amazing feedback from people who had heard what we were coming up with, and a lot of help from friends who were already part of the scene. From there, things have just gone from strength to strength, with 2012 looking to be a really exciting year.”

S] Talk to us about your musical backgrounds?

Niall] “As a group we have a very eclectic mix of influences and styles, along with being proficient at a number of different instruments. We’ve all come from predominantly playing metal but listening to a great deal of different styles ranging from things like Mr Scruff through to The Dillinger Escape Plan. More recently though, we’ve all been indulging in more of the electronic side of music, which is how we all embarked on this adventure.”

Ste] “There is so much more depth and production possible with electronic music, meaning that we’re able to create a much fuller soundscape than is possible in a traditional live band.”

S] What would you say the highlight of Cyferdyne’s career has been?

Ste] “This year we’ve been fortunate enough to play with some of the leading lights on the UK EBM and industrial scene, having shared stages with Surgyn, Method Cell, Uberbyte and Flesh Eating Foundation among many others. Considering how short a time we’ve actually been playing as Cyberdyne, and now Cyferdyne, we’re more than happy with who we’ve played with and what we’ve accomplished in the year since our conception.”

S] How are the inspirations and goals different with Cyferdyne to what they have been in other bands that you’ve taken part in?

Ste] “As musicians, we’ve always composed what we’d enjoy hearing ourselves, so with that in mind, our goals haven’t actually differed all that much. The main difference is the distance that we’ve come in such as short period of time. Considering where we are now, compared to where we were after four years of metal, it’s like comparing eggs and doors. We’re looking at our journey so far and thinking, ‘If we’ve done this by now, where will we be in a year or two.'”

S] Are you inspired and motivated by the music that you make?

Niall] “Our driving force is definitely the music and the way that we write it. If one of us doesn’t like how something sounds, it doesn’t make it into the song. It’s that simple! You have to be passionate about the music that you make, and it’s for that reason that we have such a stringent ‘quality assurance procedure’. If you’re going to be playing a song hundreds of times over, you’d better make sure you like it!”

S] You’re based in Lancaster, talk to us about the music scene there?

Hig] “Lancaster has a very eclectic music scene, with covers bands and metal dominating the local venues. That said, the guys and gals at Ritual Noise have built a really strong EBM and industrial following, with their nights often being packed. Of all the places that we’ve played, our local venue, The Yorkshire House, is still one of our favourites.”

S] Have any of you ever given thought to acting as a producer for new talent in the area, as a way of helping to promote it?

Niall] “I do help out a number of the local bands already which I love doing. I find just having one project on the go can really bring you down so being involved in other ventures keeps my mind fresh with new ideas and angles to approach things with. I don’t ask for payment for my services though, my only criteria for helping people with there work is that I must enjoy doing it! I don’t want to be dedicating my time to something I loathe, that’s what I go to work for!”

S] What is your opinion on modern industrial music?

Hig] “Coming from predominantly metal backgrounds, the thing we like most about electronic music is the lack of boundaries that are put in place. You are free to do what you want and play around with different instruments giving a very varied sound to most of the bands. One of my favourite bands in the scene is Alien Vampires, and they can get such a varied sound on one album with some songs that are more dance and synth driven and others that are heavier and more guitar driven. This then carries through to the live performances, making industrial nights a lot more interesting, rather than seeing several bands that all sound the same, as can happen with metal nights. Another thing is the scene is still relatively small in this country meaning you can see incredible bands in quite intimate venues, and everyone is so supportive.”

S] Talk us through your writing process – do you have a favourite place to write for example, or, is it very studio-based?

Ste] “Our writing process usually starts with one of us putting something together at home and sharing it with the other two at one of our writing sessions. At this point, we come together and work on building the song into a final musical piece. Once the music is written, we each take it away and begin work on variations, lyrics and vocals. I am responsible for the majority of the lyrics and melody, using both popular culture references and emotional allegory to create our lyrical vocabulary. The vocals are then recorded, with the whole band providing input into the song as a final entity both musically and vocally. Although we do very much write as a unit, all of our sound, both live and recorded, is as a result of Niall’s production skills.”

S] Take us through the song ‘Afraid To Dream’ for example, what went into that?

Niall] “‘Afraid to Dream’ began as a piece created by Ste, which, he was informed by myself, sounded remarkably similar to ‘3 Words’ by Cheryl Cole! Despite the initial similarity, it was slogged out with numerous additions and changes. From that point, the introductory section was composed, the ‘Terminator 2’ sample laid over the top, and then the song hit a wall. We had no idea where to take it after the second chorus. Then, Niall had an epiphany, and randomly threw a dubstep breakdown into it! We all laughed and chastised, until we realised that it actually really worked!”

Hig] “We’re planning on making 2012 a real year to remember for us. After building such a strong following and coming so far in 2011, we’re now talking about releasing our album through a major international label and hopefully getting on some festivals. All that with Ste expecting his first child in January!”

S] Is there anything else that you would like to add?

Ste] “We’d really like to thank everyone who has helped us come so far in such a short space of time, and all the fans who have inspired us and spread the word about our music. We very much rely on word-of-mouth to market our band, and we honestly appreciate everyone who drops our name into a conversation, or lets their friends know that we’re here. Once again, our album should be released in the first half of next year, and we look forward to bringing the party to a venue near you soon!”