For our next Reverbnation spotlight, we chat to Dead Day Revolution vocalist and guitarist, Mike Sandoz about his band, and the inspirations behind his songs. 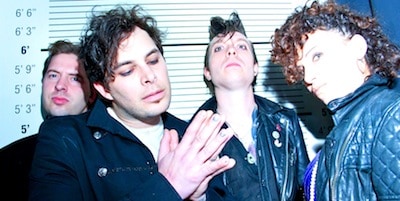 M] “Growing up in Philly, I started listening to Iron Maiden. Once I heard those guys I was sold and wanted to play guitar. From there on I picked up on a few people here and there that really stood out and made an impact on the way I think about self expression. People like David Bowie, Robert Smith, Arthur Brown, Suicide and Billy Corgan who is probably my favourite guitarist ever. More recently, I’ve been listening to some of the older singers like Roy Orbison who has this amazing vocal range, Elvis Presley, The Platters and the Andrew Sisters.

It’s really interesting to see what kind of songs come out when your inspired by someone who creates totally different music. Other than that, music is how I get things off of my chest. The release I feel when I write about something that has been bothering me is so therapeutic. I believe that’s the beauty in art. You know one of the people who has inspired me the most though is our drummer Skeeter. He’s always been there encouraging me to believe that I can do anything. We have come a long way together.”

M] “Most of our songs are stories about interactions. I have had with someone or an event that inspired and moved me enough to sing something about it. Usually, there’s so much emotional ammo built up, that I sing the lyrics on the fly as we are creating new songs in our studio. Then I’ll go back and clean them up a bit. The last batch of songs have been on the dark side. You’ll find me alluding to witches, vampires and ghosts. My ex-girlfriends have pleasure of being the subject in a bunch of our songs! In a lot of our material I am indirectly singing to someone specific. Who knows, maybe you’re next!”

M] “’Vampyre Blues’ for sure. This song is about my ex. Just like the song says, she took all my blood and left me there to rot. Maybe I’m being a little dramatic but I’m sure there’s plenty of people out there that can relate to that one. Also, I’ve taken a step forward with my guitar playing and started to introduce some solos into our songs. I sing and play at the same time so it has been an adjustment to learn how to make the guitar parts sound more interesting and be able to sing and give a good performance all at once. Skeeter and I have hit a stride where we are really on the same musical page. A bunch of our newer songs have this vibe.”

M] “Of course! Rock and roll is alive and well! Stick to your guns and believe in yourself! Skeeter’s family is from Manchester, and we would love to get out there and tour the UK! Give us some love and let’s make that happen!  Last but not least, thank you for Arthur Brown!”

M] “Skeeter wailing on his drums like a reincarnated, maniacal Buddy Rich. Me having a freakout on stage and delivering our message very passionately and intently. All while my Orange amp is cranked to the max and Adam’s bass is punching you in the chest. With the occasional pair of panties thrown on stage….it all makes for a good time.”

M] “Our biggest challenge right now, that most people can relate to, is money. We are self-funded as are many young bands.  So the result is that it just takes longer to get our product out there to the world. It’s expensive to have a band that’s independent.  Especially when you’re living in LA. Another thing is all of the waiting.  The album is recorded and we are just waiting for our producer, Larry Goetz, to finish mixing so that we can send the songs off to get mastered. Larry, I hope you read this!”

M] “We are just about to begin producing posters and shirts along with other tricks and trinkets and what-not. All of our designs are being created by an amazing artist and friend Sideshow Drawbaugh.  Our self-titled debut album is almost finished and should be out in early spring. We have also built a social network for fans to become a part of. Once we get all of the products out we will have some money to have our site re-vamped and pimped out proper. We have already started writing songs for the second album as the first album is all recorded.  And of course, playing loads of shows as usual!”