One of Europe’s liveliest and hardest-working bands recently performed their first-ever gigs in the UK. Elvis Jackson; whose music is influenced by ska, punk, metal, hardcore and reggae; took time out to speak to us about how they found their introduction to British audiences. 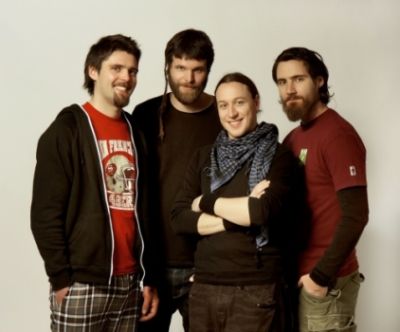 “In Slovenia… concerts are more about a party than music.”

S] You’ve just completed a UK tour, what was the experience like for you?

E] “We were very excited to play finally in the UK and it was really a great experience. The tour left us with the feeling that we will be back soon.”

S] Were there any highlights of your British shows, and what were they?

E] “The first show in Dover was the first time we played in the UK and we didn’t know what to expect. We needed a couple of minutes to adapt to British humour, and what followed was a great show. And so were the others, each one with unique atmosphere, a connection with the audience and positive feedback.”

S] Did you notice any differences, or any similarities, to how your audiences in the UK react to your shows compared to what you’ve found from playing in other countries?

E] “The way the people reacted to shows is similar, but talking to people after the shows, we got the impression that they paid more attention to music, knew exactly what they just saw, and some defined what Elvis Jackson is doing better than we would. We also like seeing people of all ages, from like 20 to 70, coming to shows. In Slovenia, most of the people that go to concerts are in their twenties, and concerts are more about a party than music.”

S] The British press have been supportive of ‘Against The Gravity’. How do you feel about this endorsement?

E] “It’s like a welcome drink – always welcomed. It feels very good after 13 years of hard work. Thanks to all the media for support, and for giving us an opportunity to come closer to the UK audience.”

S] It must mean a lot to receive good reviews about the album as you worked with plenty of rock legends when making the album. Who did you work with, and what was it like to collaborate with them on ‘Against The Gravity’?

E] “The album was produced by Bill Gould (Faith No More). He made the recording process feel very easy and everything was running smoothly, with no complications at all. After a three-day session, he told us: ‘You guys look like you know what you’re doing, let’s just record it like it is.’ Then, we tried to combine whatever equipment we had to get the best sound and started to record. We recorded in Studio RSL in Slovenia, and went to the USA for mixing and mastering. The mixing was done in Radio Star Studios by Rich Veltrop (Red Hot Chili Peppers, System of a Down, Slayer etc.) and the mastering by John Cuniberti (Aerosmith, Dead Kennedys etc.). During the whole process, there was no chance for things to go wrong.”

S] Do you find the reviews from fans and the press useful in helping you to develop your sound?

E] “Once you read a review it stays in your head, maybe just on the subconscious level, and will somehow influence you when writing music. Thanks to all our fans in the UK, we can hardly wait to see you again.”

S] Can you tell us what else inspires the Elvis Jackson sound?

E] “Mostly playing lots of live shows. It’s good for staying fit and also makes you see other bands playing which gives you information about what to do or what not to do. And, of course, there will be always a little bit of Sublime, Bad Brains, Slayer and other bands we listened to in our
sound.”

S] You are the first band we’ve encountered at Soundsphere to come from Slovenia. What can you tell us about the domestic music scene in your home country?

E] “The music scene is small. The mainstream is mostly about reality shows and cooking on TV, but there are a lot of bands that play just for the fun of it. Maybe Laibach is the band that went as far as a Slovenian band can go for now.”

S] Are there any other Slovenian bands or musicians you can recommend to us? Or maybe bands from other countries in Eastern Europe?

S] Now you’ve toured the UK, you’re returning home to Slovenia. Do you have any plans for the rest of 2011 and beyond, and what can you tell us about them?

E] “There are some shows booked, but mostly we will focus on finishing new material for the next record and writing new songs.

S] Finally, do you have any messages for your fans in the UK?

Thanks to the guys from Elvis Jackson for taking the time to speak to Soundsphere. You can check them out on their website.