Rachel Haywire is the spirit and drive behind the world’s only all-female Industrial record label, she is also the creator of the notable electro-punk act Experiment Haywire. With her harsh vocals, decadent stage-show and determined attitude she has created a monster made of cables and wires ready and set to bulldoze the competition. You can’t stop this machine… 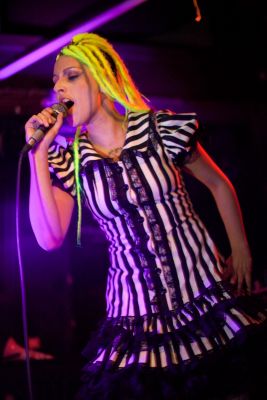 “Can we have a zombie outbreak tomorrow? Please?”

S] If you could have a Haywire release dinner for your next album, and you could pick two people, dead or alive to join you – who would they be and why and what would you feed them?

RH] The first person I’d pick would be Michael Jackson so I could ask him why he didn’t fire his press agents. After he died all that people did was make paedophile jokes and I definitely don’t think he was a paedophile. He just loved being around children because he felt like one himself. I’d also pick Luigi Russolo so we could discuss ‘The Art Of Noise’ and I would talk to him about the current Industrial scene compared to the scene in the 1980s. I’d ask him if the futurist movement was as misogynistic as people said it was and I would tell him about female musicians like Delia Derbyshire who used white noise to compose her music in the 1960s. I’d feed them both Indonesian food because Indonesian food is the best. While we were dining I’d play my new album for them over glasses of red wine. Then I would ask them if they wanted to smoke out of the KUNT bong for desert.

S] Rachel, you seem to be constantly working so can you talk us through your average day at the minute?

RH] If I had an average day I wouldn’t be doing this. I’m constantly travelling to shows and festivals and while I’m not quite breaking even I’m still having a great time. I’m also finishing up school so I can write and direct plays in the future. I guess school would be considered my down time. After I get my degree in Performing Arts I want to incorporate my plays into my live musical performances.

S] What is most inspiring to you right now, about the worldwide Industrial scene?

RH] It’s got to be the effect of ‘Repo! The Genetic Opera’ and having artists that combine theatrical drama with dark and uncomfortable music. This is definitely a form of evolution. Let’s put the theatre into Industrial and the Industrial into theatre. ‘Rent’ and ‘Stomp’ both came close but not close enough. I’d love to see a modern day Industrial musical on Broadway. This is everything I’ve ever wanted.

S] What are you most looking forward to about possibly touring the UK one day to do something like a machineKUNT showcase or perhaps work with Autoclav 1.1 or Uberbyte?

RH] I’d actually like to move the UK eventually. I feel like the United States isn’t very welcoming. The scene in the UK seems to be thriving a lot more and it’s much easier to get to places like Germany. I would love to perform live with Autoclav 1.1 or Uberbyte out there. I’d also work on some more tracks with them or even just go out for drinks. They’re great people. A machineKUNT showcase would also be a fun. There are so many possibilities right now.

S] There are many talented young female artists in Europe who can perhaps take a cue from your all-female label, if they wanted to start something along the lines of machineKUNT, what advice would you offer in terms of key steps – will people get in the way?

RH] I feel weird tell anyone else what to do this is the main advice I’d give them: be yourself, work on becoming a great programmer, and don’t try to sound like anyone else. Not Suicide Commando and not Experiment Haywire. Every artist has their own unique sound to find and it’s all about self expression through this sound. Of course any artist who gets recognised will be met with competition, especially female Industrial artists, but if you’re passionate and determined enough to get your music out there then nobody can stop you no matter what they put you through. I can’t, with a good conscious, recommend that anyone else to start their own record label. These are extremely difficult times for independent artists and becoming an independent record label owner is pretty much financial suicide.

S] How do other forms of art influence and inspire you, and how do these come into play in your everyday life?

RH] When I was younger I used to make Industrial collages and I think this had a bit of an influence on my music. I’d find random circuit boards and wires on the 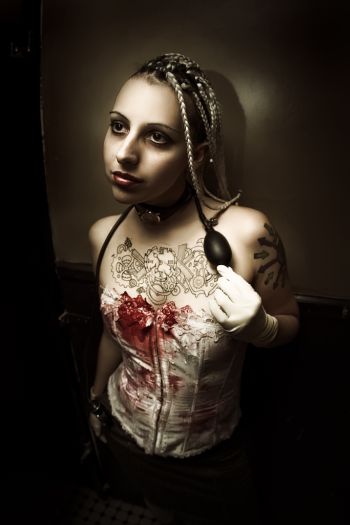 streets and glue them together with broken machine parts and clippings from magazines and newspapers. Everything had a social or political message. I’d spray paint these 3D collages and they looked like they were straight out of a post-apocalyptic sci-fi film. This was a lot of fun. I was doing this sort of thing when I was working on my first album ‘World War 23’. I’m into visual artists ranging from Salvador Dali to Jeffrey Scott to Camilla Rose Garcia. I’ll read Juxtpoz Magazine when I can. My music and life wouldn’t be the same if it wasn’t for other forms of art. Music is simply one medium out of many. Don’t even get me started on film.

S] Can you tell us about how the themes on your next album ‘Grrl Interrupted’ will develop away from those on ‘Annihilation Chic’ – you’ve said that the themes are very dark and personal?

RH] Almost all the songs on ‘Grrl Interrupted’ are very personal and the aim of this album is not to make people dance, or even to get them pissed off at scenester conformity, but to exorcise my pain from the past and the present. I want other people who are going through Post Traumatic Stress Disorder to know that they’re not alone when they listen to ‘Victim Mentality’ and I want other people who are into BDSM and use it for personal healing to understand every word of ‘The Aggressor’. I don’t want to give that much away but I have a feeling this album will reach a lot more people on a personal level than ‘Annihilation Chic’ did.

S] You have said that you want to develop the Haywire shows into something a lot more theatrical – in the future – what ideas do you have and will you take some influence from your roots in Nuclear Riot Party?

RH] I just opened for Babyland in NYC and some of the old members of the Nuclear Riot Party showed up. In spirit we had some performance art on stage but it wasn’t performance art like the NRP where there was no focus or direction. My performers held up signs that said ‘DECAPITATION’ and marched like they were militant protestors for the opening song. They did strange invocations and played with knives during ‘Occult Casualty’ and during ‘Game Called Life’ they played chess. The performers then fake gossiped on stage like catty Goth girls to the song ‘Stereotype’ but a lot of people didn’t realise this was part of the show. During ‘Mean Enough Hot Enough’ they mocked this image obsessed society we are in by freaking out over their makeup which soon turned into them spanking each other hardcore. We all had an amazing time. This was really my first try at turning an EH show into something more theatrical and I’m going to learn what I did right and what I did wrong for the future. The crowd participation was great. My fans held up protest signs that said ‘Haywire’ on and each one had circles and lines through it. If people are going to go against me I might as well get my fans in on the fun.

S] What are your biggest plans for the rest of this year – alongside recording will you write as an author more as well?

RH] Right now everything is pretty much up in the air. I’m gonna be playing Seattle in August and Savannah in November. If I get anymore nice gig offers I won’t turn them down. I’m gonna be starting a new book which is completely different from my new book ‘Acidexia’ but I’ve gotta wait until that comes out before I get too far ahead of myself. I’ve decided to create a website for musicians to post their writings because it seems like musicians are often looked at like idiots. Let’s change that. The writings aren’t gonna be about music or the industry but about the thoughts that are going through our heads, how we feel about social issues, and whatever strange dystopian fiction we decide to throw out there. I’ll keep everyone updated. ‘Sanity is Slavery’ is also coming out on machineKUNT Records this year which is a musical compilation I’ve created to raise awareness and stop abuse in the psychiatric industry. 10 per cent of proceeds are going to Mind Freedom International. The compilation features all genders and genres.

S] Another random question, Rachel…if there was to be a zombie outbreak tomorrow, what weapon would you use to defend yourself?

RH] I’d use my collection of haters, stalkers, and detractors as a weapon. I’d put them all in a gigantic jar and unleash them upon the zombies during these final days. I’d team up with the zombie so we could all fuck with the brains of these humans together. Why restrict yourself to eating brains when you can fuck with brains too? Can we have a zombie outbreak tomorrow? Please?