Glass Caves are a Yorkshire-based indie rock band who have been rising since their appearance at Reading and Leeds Festivals and frequent busks and performances in and around the Yorkshire area. With their upcoming gigs in London and Derby, it looks like a busy year ahead for them. We chatted with Matt (vocals and guitar), Connor (backing vocals and guitar) and Elliot (drums) after their gig in Fibbers, York, about their experience so far and where they’re heading next. 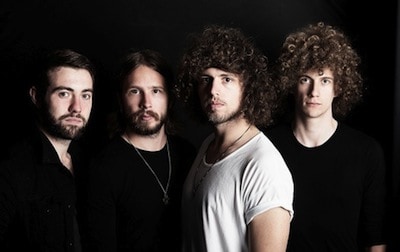 M] “They were called the Sellers before I joined.”

C] “We’d been a band before Matt joined us, and we decided to get a new singer. We called the garage where we practised our little cave. When we were ready to start touring, we still needed a name. Once we started doing gigs, it was as though we were still in our cave, and people were starting to look in and finally hear our music. Glass Caves seemed right for it.”

S] What bands influenced or inspired you?

M] “Arctic Monkeys were getting big when I was growing up; they had good, interesting music and they were from a local Yorkshire town – it seemed like a good route to go down. Other bands too like Led Zeppelin, the Police, XTC influenced us too. But music in general influences us, like jazz. A bit of everything.”

E] “Music in general; we’re not picky about what kind of music we like. If it’s good music, we tend to enjoy it.”

C] “That’s a good question! My favourite is ‘Clear Skies’. It’s a new one and a bit euphoric. I’m a fan of big sound which is why I enjoy that one.”

S] Great variety! Have you ever covered a song?

C] “We busk a lot in York and people usually enjoy covers. It’s fun to perform them acoustically.”

S] What’s the first song you ever covered?

E] “We also did a song by The Pogues at a Christmas gig last year.”

S] Tell us about Leeds and Reading Festivals. What kind of experiences were they?

M] “We’d dreamt to play in Leeds and Reading for a long time. It’s just the local one everyone goes to so it was a really big deal for us.”

C] “Leeds might have been a bit colder and muddier but it was just as lively as Reading.”

E] “At Leeds no one could sit down for the mud so there was more dancing going on!”

S] How was the gig tonight?

M] “It was great. We’ve played at Fibbers before but it was a lot better this time.”

S] What would be the ultimate place to perform for you?

E] “Definitely the Red Rocks, USA. The stage is carved into the stone, it looks unbelievable.”