In our latest artist spotlight interview, we chat to former Terrorvision bassist Danny Lambert about writing with his new band; the up-and-coming York-based three-piece rock outfit that is Hellbound Hearts, and discover what they have in store for Yorkshire’s rock scene (and the world) in the very near future… 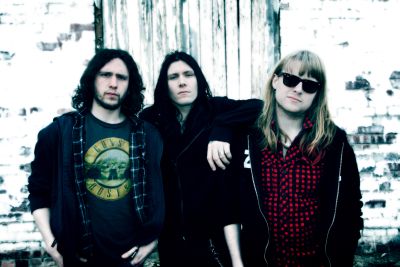 S] Can you tell us about the band and how you formed?

D] “After my stint playing bass for Terrorvision, I wrote some songs and got a band together in Bradford with two good friends of mine. The band didn’t pan out so I took some time away from it all. I was touring as a guitar technician for a few different bands around the world. After a while though, the bug to get back on stage kicked-in! Around July of 2010, I met a guitarist through a friend of my wife and we started from there. After a few line-up changes, by January 2011 we had a complete four-piece together and Hellbound Hearts was born. By March however, the rhythm guitarist decided he did not want to carry on, so undeterred we stripped down to a three-piece which was the best thing that could have happened! Now, it’s full steam ahead.”

S] What’s in the name Hellbound Hearts, and what does it mean to you?

D] “‘The Hellbound Heart’ is the title of the book that later became the film ‘Hellraiser’, and we just thought it suited us and what we’re doing musically. It wasn’t the first name idea we came up with, but it’s the strongest and it is the one that stuck!”

S] How do you think your previous experience within the industry helps you this time around with Hellbound Hearts?

D] “It’s taught me that you have to keep an eye on everything. It is very important to be honest in what you’re doing because fakers within this industry don’t last long. You have got to stand by your beliefs and gut feelings on things. Most importantly there is no substitute for hard work and tenacity.”

S] What has inspired the writing process for your songs so far – what are the themes and ideas behind your songs?

D] “Musically, it starts with riffs. We quickly learned that we can’t force anything. If an idea hasn’t become the bedrock of something that all three of us are excited about within 20 minutes or so, then we walk away because anything we force like that is not going to be our best work. Lyrically, I don’t know what or why; it just happens and, like the music, if it works, we’ll keep it!”

S] We’re massive fans of the snippet for ‘Devil’s Playground’ that you have up at the moment – what inspired that song?

D] “That song is about a guy called Jeff Conaway who I saw on a programme called ‘Celebrity Rehab’. He was a sucessful actor in the late 70s and early 80s and he badly damaged his back whilst filming a jump in the movie ‘Grease’. From then on, he became addicted to lots of painkillers and his life spiralled out of control to the point where he ended up a dribbling psychotic on an American TV show. Sad but true.”

S] What do you think of Yorkshire’s rock scene at the moment?

D] “It is really struggling now as it has been for years. Rock clubs are becoming few and far between in favour of these awful dance clubs which seem to be on every street corner. This is a time when people who choose not to dress in sports attire and drink special brew at 10 in the morning get shouted at and ridiculed on the streets. It’s been going down hill for a while now, but there is always a nucleus of people who don’t just listen to rock ‘n’ roll, but they live it through and through. These kinds of people are not the fakers who leave the office on Friday at five, put on a leather jacket and pretend to be Slash for a night, but those real ‘true blood’ kind of fans who will always keep the rock thing alive in the UK as is swings in and out of ‘fashion’ with the greater population. We will be just fine, with or without their acceptance.”

S] Obviously, with the decline of the music industry and the continued focus on bigger cities like London and Manchester for music, what keeps you inspired as a York-based band to keep making music?

D] “I think that it would have to be the knowledge that we can get in the van and go to London and Manchester!”

S] What have been some of the biggest challenges for you in getting this material together?

D] “The clashing of personalities and the differing opinion on direction. That’s all sorted now and we’re all reading from the same page.”

S] Are there any other bands in York that you are particularly proud of at the moment?

D] “I don’t consider us to be a ‘York band’. Time and circumstance brought us together and it just so happens that was in York. Sean and Andy live on the outskirts of the city, but I live far away from it all and as such, have a better insight on the bigger picture. It’s too easy for bands to get trapped in a local scene; mates going to see mates’ bands and nobody buying anybody else’s records while everyone dwindles into obscurity. Hellbound Hearts are not a York band; we are simply a rock band.”

D] “To play as many shows as possible and to gain as much fan interest and backing as we can. We want to take Hellbound Hearts to the next stage and show the rest of the world what we’re made of. We also want to remind everyone that rock ‘n’ roll still has a very strong beating heart and won’t be kept quiet anymore.”

S] Are the tracks you have on offer a good indication of what’s to come on your full-length release and how much can you tell us about that?

D] The album is shaping up tracks-wise but there is no recording or release date in the pipeline yet, but I can tell you for certain it will be loud, heavy and pure Hellbound Hearts.

S] If you could sum up your sound in recipe format (for example a sprinkle of Guns ‘N’ Roses and a dash of Terrorvision) what would your recipe be? 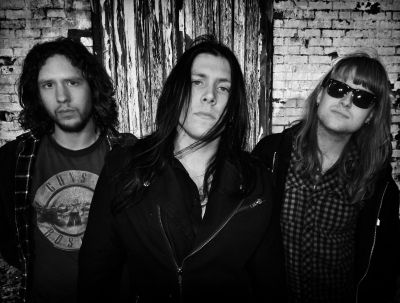