From deepest, darkest Glasgow, something wicked this way comes. Announcing their arrival way back in 2002 with ‘Advanced Burial Technology’, their debut album was so awesome it caused all household appliances within a 10 metre radius to spontaneously combust, Je$us Loves Amerika were an industrial powerhouse who not only took a war to the dancefloor, but simultaneously gave us cause to reflect on the political machinations that litter the globe. Music with a head and a heart? Who would’ve thought it? We chat with vocalist Patrick Dougan about what the band has been up to recently… 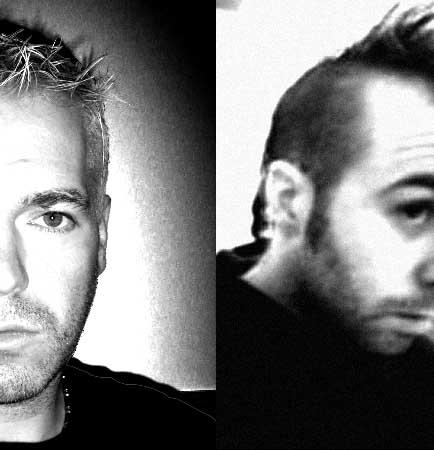 P] After a sort of hellish period it’s actually became quite inspiring again. At one stage it was as if everything was conspiring against us, but it’s all worked itself out.

S] Aside from an appearance on last year’s ‘Machines Against Hunger’ compilation, JLA have been almost deathly quiet of late, what gives?

Patrick] Well firstly, more than an album’s worth of material was lost in a hard disk crash. I was running two disks mirrored in a RAID array to safeguard our stuff. Unfortunately, what I didn’t factor was using two IBM ‘deathstar’ drives and they both gave up their data. I don’t know what caused it, but it wasn’t a nice feeling and now I always follow a backup procedure. I then wasted a lot of time trying to recreate the tracks. Huge mistake, stupid, stupid, stupid. It made me unable to write for ages because I was fixated with trying to sound ‘like JLA‘. And then there was the snare sound debacle. 18 months of trying to find a snare sound that I dreamt. It doesn’t make me sound too mentally stable, but that’s how my mind works. After these blips I was getting nicely back into the swing of things (see ‘Machines Against Hunger’) when Scottish Power wanted to inspect the boiler in the studio. The guy trashed a number of significant bits of the studio but a year later their insurance company were still trying to wriggle out of it. So, in the end I sucked it up and bought new stuff.

S] What’s changed since we last saw you? Is the band line-up the same? If not why not, and who does what now?

Patrick] The band line-up is broadly the same. That’s a lie. It’s changed a bit. Gerry McAleavy has retired from making music so is no longer involved. He got fed with the rampant dishonesty in the industry. Brydon (Cheyney) and I are still at the coalface though. I write the majority of the music anyway, but I was sad to see Gerry go as he’s my best friend in the world. That being said, best friend or not, it’s better not to have people involved reluctantly. Gerry mainly worked on sampling and post-production, but we now have a couple of very, very talented guys on board for this and live work. Mark Elder, he’s a genius. No kidding. One of the most inspired guys I know, so I’m pleased to have him on-board. He has his own band, MXR, which he’s recently started working on, so the extent of his involvement won’t be clear for a while, but he’s a great guy and keen to do stuff. There’s also Andy (Modus i-v). Again, he’s a good friend of mine and a talented guy. Both are equally important. He’s done some interesting remix work for, say, Rabbit Junk, that I admire so it’s good news that he’s involved. I’ve always worked sort of remotely – Me writing tracks and then passing the buck to Gerry for turd polishing, so there will still be that element where the guys can take stuff and play, but I’m also wanting to experiment a bit with the guys being around when doing stuff. It’ll still be the Patrick show (I wasn’t nicknamed Trent for nothing) but it’s good to let others in and challenge your preconceived ideas.

Patrick] It’s really taking shape. It’s nice that I can actually feel that stuff is progressing. And that makes it more encouraging to do more also. I’m in the studio every week and I’m in Bitcrusher (JLA‘s studio) every day, but I’ve also hired a space to work in. I take in my MacBook, record stuff and bring it to Bitcrusher to mess up. It’s a nice way to work.

S] It could be argued that JLA’s manifesto is somewhat inflammatory what with the Dollar sign hidden in Je$us. Do you ever worry that there may be some kind of resultant backlash or reprisals? The folks you tend to mock can generally be found at the more extreme end of the maniacal patriot spectrum…

Patrick] I tend to look at it a little differently. The Amerika spelling was inspired by Malcolm X, a guy whom I admire a lot. He’s painted as a crazy guy, but if you look at his beliefs, he was a clever, astute and humble. To pull back from, and speak out against, the Nation of Islam leadership was incredibly brave. I also think he had a point – he demanded respect and refused to be classed as a second class citizen. Rosa Parks admired him and would she have changed history and civil rights without him? The Je$us bit is obvious I guess, but religion needs to be knocked as it’s a fundamentally dishonest position that religion takes up.

S] Have you gotten much feedback from across the Atlantic? Just what do Americans make of JLA?

Patrick] We’ve not had a bad reaction at all. I’ve worked with a couple of Americans – A DJ called Lais (DevilBunny) recorded a bunch of samples for us. She was more outspoken on democratic issues than I! She wanted to record stuff that would have got me put in the tower of London! I think the demographic we are in is a good one, people are less into throw away tunes and more into listening. We have a US marine on our mailing list, and he got the point. Something I was glad about because he’s doing something on principle and something that scares the **** out of me. Make no mistake, in the Government’s imperialistic game the troops on the ground are as big a pawns are we are. Except they have to pay with lives. It’s a tragedy.

S] Those that know you will attest to your incessant chatter about Front 242 being the greatest band the world has ever seen. Just what is about those Belgian’s that rocks your world?

Patrick] It’s rare that a band that’s been going for a while retains the will to experiment and grow. 242 have always pushed themselves and have never lost that spirit of adventure. NIN dropped the innovation and became a stadium rock band, the music inspiration replaced with something else. 242 have wanderlust and they continue to push the envelope. I always thought that as I get older I would lose my anger and settle down. Instead I get angrier. Front 242 are likewise, but instead of anger they are adventurers. This being said, the newest 242 track is as unequivocally political as any I’ve every heard. Colours have been nailed to the mast and I like that. They’re easily the best live band I have ever seen. Big stage, small stage, they know how to work it. Two great front men and supreme talent backing them up. Add to that that as humans they are as nice as you will ever meet and are really open and honest guys.

S] Is there a chance that 242 and JLA could work together at some point in the future?

Patrick] I’d like that to happen. Certainly, I think myself, Patrick Codenys and Richard have similar tastes and outlooks. Studio-wise, I don’t know, but we would love to play together. On that front I’ll not say too much other than should it happen, I have a plan. I have a couple of ideas up my sleeve. And just to put on record that there is a long standing plan for a 242 vs. JLA football match that we haven’t been able to make happen yet. That’s because the 242 boys know we’ll win. They’re running scared.

S] JLA live shows are known for their incendiary nature, do you prefer playing live or would you rather squirrel away in the studio?

Patrick] I love both probably equally. I’m not a confident person, but when I get on stage, I’m a different person. I can’t explain it, but I feel confident there, happy. In the studio I get to deal with different things. Writing lyrics lets me vocalise my fears and vulnerabilities. Things I can’t normally express. It’s why I hate bands with throwaway lyrics, what a wasted opportunity.

S] What do you think of the current UK industrial and alternative scene? Any bands you have a particular fondness or distaste for?

Patrick] I think Rabbit Junk summed it up nicely: ‘Techno music with goblin vocals is stupid‘. I like trance. I dislike mediocre trance writers who think they’ll get to f*** more girls if they stick on some pvc trousers and dump a grunty vocal on top of a track however. Being honest, a lot of the scene leaves me cold. There’s a bunch of good stuff out there, but it’s not the headline grabbing stuff. Personally I think that the scene is heading for the same train wreck that goth had. It’s become too -‘me too’-y. There isn’t the same level of diversity and the bands that dare to be different are pigeonholed in some ridiculous sub-genre: ‘post-apocalyptic-neo-Germanic-heavy-industrial-rock-folk’ for example.

S] Your propensity for combining alcohol with your inability to hold your tongue are legendary, what’s been the single worst chaotic incident you’ve ever caused or been involved in?

Patrick] There have been lots of incidents. Lots. I embarrassed myself significantly after a gig by complaining about the bass player from another band eating the food part of our rider. The guy was huge and I went off on one thinking he’d left the building. Unknown to me, the people making faces at me were actually mouthing ‘he’s behind you‘.Then there’s locking one of the DeathBoy guys in a dressing room toilet? To be fair that was after a bottle of Irish whiskey. More recently, after a discussion about a known extreme right wing ‘neo-folk’ (a genre that could be more accurately summed up as ‘sh**’) band I got annoyed by a guy defending them. I told him if they played Glasgow (the scum in question were Von Thronstahl) then I’d give them a gig to remember. After some too-ing and fro-ing I decided the guy needed a friendly punch in the face. To ensure optimum contact I cupped my left hand round the back of his head to pull it toward my fist. His wig came off. Talk about an awkward moment. Between embarrassment, extreme amusement on my part and self-righteous anger I didn’t know what to do. How can you punch a guy after pulling his wig off? I received several lectures from people about that as well as congratulations from the bouncers of the club I was at. They’d been desperate to do it for ages.