In our latest spotlight interview, Combichrist drummer Joe Letz talks about balancing real life responsibility with a career in the music industry. 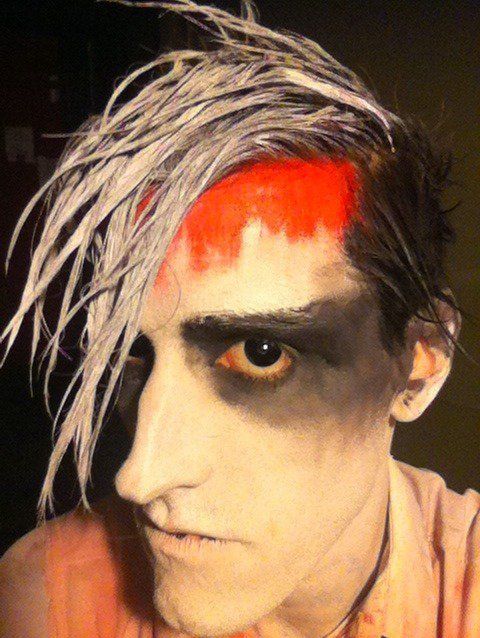 “My life seems to be full of randomness”

S] Hey Joe, our interview from 2008 is still a big hitter on our website, apart from touring with Combichrist, what other cool things have been happening to you?

J] Combichrist has been on a bit of a hiatus so I finally have some downtime to focus on my personal life a bit. There’s a new relationship which has spawned out of a close friendship, and it is great to have some time to work on my clothing line as well.”

S] The deep meditative state that you go into before performances that you spoke about in that interview – has that changed at all, or has anything developed in the way that you prepare for a show?

J] “If anything it’s gotten a little more structured and focused! I wound up hurting my back on the Rammstein tour and have had to do extensive chiropractic maintenance on it since to get back to health.  There was a point towards the ends of our second European leg with Rammstein where I could hardly hold a drum stick in my left hand! It was numb, I was in excruciating pain from a bunch of my discs popping out and my spine crushing some of my nerves. So, I’ve had to learn some new techniques to my stretching before shows to try to keep that from happening again.”

S] You recently appeared on a TV show over in the States as part of ‘NY Ink’ visiting your girlfriend Megan Massacre, and you’ve also done a bunch of tour videos for Combichrist – would you consider a TV career, as a presenter or something?

J] “Not really! But then again, I never really thought that I’d wind up on a reality show either. My life seems to be full of randomness so, I wouldn’t really put it past myself!”

S] Do you and Megan have exactly the same music taste, or does it differ at all?

J] “No. I like country and she likes rap.  we’re the perfect couple!”

S] Would you consider going into tattooing, yourself after music?

J] “It looks like it’d be fun but I’m not incredibly artistic on paper. Luckily, through being with Megan, I get to experience a lot of perks from the job like shop banter and the whole culture and lifestyle without having to actually be a tattoo artist! Besides, I don’t think I’d really want to ever date a chick drummer, so I really wouldn’t ever consider putting that on my girlfriend!”

S] When will you be back over to the UK, and are you looking forward to seeing anything particularly?

J] “Combichrist just announced the UK leg of our summer tour. I’m looking forward to mushy peas and sinks that make absolutely no sense. Also, being extremely uncomfortable anywhere outside of my tour bus and eating lots of decent chocolate, like flake bars and those great honeycomb motherfu**ers who’s name I forgot [Crunchie? -ed]… also, not visiting Starbucks for their cakepops.”

S] There was a rumour going around before Jason Sutter got the job that you might have joined Marilyn Manson, it’s a shame you didn’t get that. Care to discuss?

J] “Yeah, that was an interesting and intense few weeks. I had a great time but apparently the timing for that just wasn’t right. I was surprised to hear that they went with Jason at the end of the day, but then I came across a picture of him holding a snare drum while standing inside some sort of shallow, moving stream of water. This has been something i’ve been trying to master for years. it sounds simple but there are just so many factors involved in executing this with such grace when it comes down to it; the temperature of the water, what you’ve eaten that day, and the kind of pants you are wearing. So after seeing that picture, it made perfect sense.”

S] Combichrist looks like a lot of fun to be a part of – would you say they have been your favourite, or most chaotic band to tour with?

J] “Favorite yes! Most chaotic? in some ways, in other ways Amen was alot more chaotic. The violence that went on during the live shows in Amen was spilling over from the behind the scenes drama, and vice versa. If you watch videos of that line-up, you see Casey Chaos throwing a cymbal at me, he was aiming to chop off my arms, and me his head when I threw a floor tom at him! In Combi, I’m only going mostly for bruises and maybe some slight sprains or fractures, but not death.”

S] You have a clothing line as well – talk to us about your aims and goals with Fuxleep?

J] “My aim with Fuxleep has always been exploiting and capitalising on wayward celebrities.  There’s nothing I love more than turning on TMZ and seeing that Lindsay Lohan skipped out on her community service again and then made out with her mother at a party! Stuff like that gets my blood pumping!”

S] In our last interview, your other job when not on tour was as a “housewife ” taking care of your son – how important would you say family is as a source of inspiration for you on a daily basis?

J] “That’s an interesting question. Most people would think that the fact that I go away so much might mean that I hold little stock in a sense of family, but it’s actually quite the opposite. It is what drives me to keep doing what I do. Unfortunately, what I do is something that does keep me away for long periods of time, but it is what I do. I need to provide. There are times that I wish I would have just become an accountant and then I wouldn’t have missed out on so many things. I still have yet to be home for one of his birthdays besides the day he was born. But, I’m hoping that this lifestyle will be a cool thing for him to begin to experience through me when he is old enough, and maybe even give him an idea if he’d like to carry on in my my footsteps when I’m an old geezer.”

S] There’s a series of really nice videos online where you are playing drums with your son as well – would you hope that he follows exactly in your footsteps?

J] I actually bought him a drum set for his second Christmas. He’s played it a handful of times, but I’m not going to pressure him to do something he isn’t into. If he turns around one day and tells me he wants to be a ballerina, I’ll get him ballerina shoes and a tutu. I just want him to be happy in whatever he’s doing and to have fun. It’s all that matters.”

S] You are a bit of an entrepreneur, what with the clothing company and various musical projects, so what’s your best advice for the busy-types balancing a girlfriend, child and loads of work – are there enough hours in the day?

J] “The girlfriend part can really throw a hitch in things. I think the best advice is to be sure that you are spending what little time you have with someone who understands what drives you and is equally as passionate about something. I’ve never been able to really say that I’ve had that in a relationship up until now, and for the first time in my life everything is working itself out relatively seamlessly and I feel extremely fulfilled not only physically but emotionally as well, and not like I’m fighting an uphill battle of balancing two things I care equally about.”

S] Outside of music and clothes design, is there a particular pastime that keeps you motivated?

J] “Having sex with my girlfriend.”

S] What bands are on your radar right now that people should be checking out across a range of genres?

J] “I’m not really in tune with the ‘hot new sh**’ these days. I feel like we are in an era of music, with the current state of the record industry, of resurrections and reunions of old bands that we grew up on. I’m sort of embracing this honestly. I mean, it sucks for cool new artists, it’s a bad time to start up a new band if you want to see things flourish like they used to, but it’s great hearing stuff that you thought you were too cool to listen to when you were a kid and cared what people thought about it.

Basically, what I’m trying to ‘sugarcoat’ here, is that I’ve been listening to Limp Bizkit’s greatest hits for the past few weeks, and it’s nice to not feel like I’m supposed to want to punch Fred Durst in the face anymore. Instead, I’d rather ghost-ride the whip with that mofo and possibly consume 40 ounce bottles of malt liquor on my homie’s doorsteps in Brooklyn and high five him when hot black chicks walk by…. and smile…. honestly man, I just want to fuckin’ smile.”