For our latest artist spotlight, we speak to Khoma’s vocalist Jan Jamte about having his music featured in a blockbuster movie (‘The Girl With The Dragon Tattoo’), making records, touring and major plans for 2012. 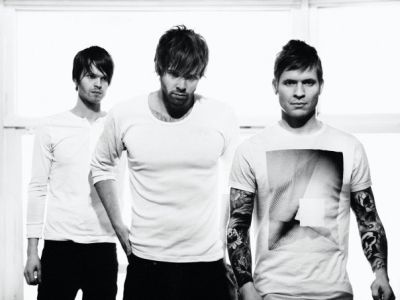 JJ] “Yeah, it’s been good, but hectic. Combing an intense period of work with putting together something new for Khoma has made the days long and nights short. But it´s starting to come together as I write this, so now it feels nice!”

S] “One of the highlights from last year must have been your inclusion in ‘The Girl With The Dragon Tattoo’ ´film with the song ‘The Guillotine‘ – how do you feel about that, and how did it happen?

JJ] “We won a national award for ‘Best Rock/Metal Of The Year’ here in Sweden in February 2011. At the same time, Johannes [Persson, guitarist] worked as extras casting co-ordinator for ‘The Girl With The Dragon Tattoo’. The producer found out about our music and asked Johannes to give him all of our records. A few months later David Fincher just walked up to Johannes and said that he and Trent Reznor wanted one of the songs in the film. So, it was great fun.”

S] That’s a particularly deep song, and a strong favorite for fans, so, can you take us back to when you wrote it, and the inspirations behind it?

JJ] “We wrote the song over six years ago and I remember it all came together very naturally. The vocals and bassline just grew together and there’s was not so much that needed to be done once the melody was finished. We decided to invite a friend to play one of the melodies on cello to give it a more harsh and acoustic feeling. Lyrically, the song is about discovering, questioning and trying to get rid of male-privileges, so beside the mood it also fits great with the feminist message of Stig Larsson’s writings.”

S] UK fans will remember the release of ‘The Second Wave’ in 2007 via Roadrunner Records – how do you look back on that record as a whole now?

JJ] “We had a truly great experience with RR and are still good friends with the girls and guys at the office in England. They did a great job, but I think that we and RR in general, had different visions of what Khoma could and should be. We might differ from some of their other bands. We’ve never been in this to become huge, touring 24/7, trying to ‘make it’. We just wanted to do our music, follow our own will, have control over the entire creative process and stay true to our ideals. That´s a lot easier on a more DIY-label, so the last record was released by Anders Fridéns [In Flames] on his new label Selective Notes.”

S] How do you look back on successful tracks like ‘The Guillotine’, ‘Medea’ and ‘Stop Making Speeches’ – are they still important songs to you as you have moved on to release another record?

JJ] “Of course. I still feel that ‘The Second Wave’ is a really strong record and I hold many of the songs very close to my heart. We invested so much emotion and time in the songs and there almost like a photograph of that era in life for me. But we also made some mistakes on the album that we´ve tried to learn from. After releasing ‘The Second Wave’, we tried to be everywhere at the same time, and ended up being nowhere. So this time, we wanted to focus on doing things territory by territory. So, the first step has been Scandinavia. The new album, ‘A Final Storm’, got a really good response here so we decided to focus our touring. When playing live we still do a mix of the albums.”

S] Will we see you back in the UK soon?

JJ] “We’re looking for someone to release ‘A Final Storm’ in the UK, but nothing is set. If the album comes out we are definitely going to come over to play. We had a truly great time at the clubs and Download Festival was one of the most memorable gigs on ‘The Second Wave’-tour.”

S] How did 2010’s ‘A Final Storm’ progress from ‘The Second Wave’ in terms of themes and ideas?

JJ] “It’s been four years between the albums and we have all grown into a new phase. Many of the songs of ‘The Second Wave’ took their starting point in the idea of the ‘personal as political’ and questioned different forms of hierarchies and systems of unjustified privileges in both our own lives and in society in general. Now it’s been four years, we are all over 30, and ‘A Final Storm’ deals more with feelings of alienation and how you, as you grow up, are expected to conform and adjust to norms and unwritten rules, while the problems that you reacted against in the first place are as acute and pressing as ever.”

S] What have been some of the biggest challenges for Khoma over the last few years?

JJ] “I think just holding the band together and finding an arena that suits Khoma has been challenging for us. This band has been filled with conflict as a result of the members’ unwillingness to compromise, and it´s been like that for many years. Everyone is very strong-minded and when we create things together we sometimes go at eachother’s throats. At the same time Khoma has been such an important part of our lives – an emotional, musical and political outlet – and we´ve all wanted to keep doing music together. So instead of falling apart we´ve tried to deal with this, realising that the way we´ve been resolving conflicts has many times been destructive and that we need to find a level that suits us to keep things going. The last year has been much better, and we´ve gone from three members in the band to six.”

S] Are you currently working on new material – how is that going and what can you tell us?

JJ] “Yeah, as a matter of fact I just came from the studio. Khoma will release something this Spring – we wanted to do something really special for the people that have been on this journey with us.”

JJ] “I Just want to thank for all the support you showed us during ‘The Second Wave’ and say that we´re sad we haven’t been able to come over and play the last few years. If things go the way we want both ‘A Final Storm’ and a new surprise will hit you soon – and so will we. It will definitely be something to look out for.”