As the build-up to their second album gains momentum, Northern Ireland’s Mojo Fury are currently on a UK tour. We spoke to Michael Mormecha and Ciaran McGreevy as the band prepared to hit the road, where past tours, future plans and present pets came up for discussion. 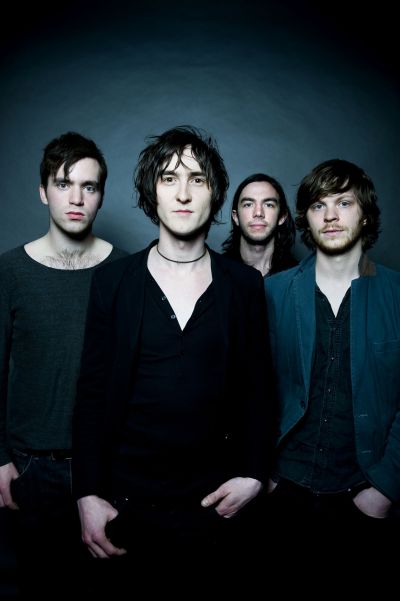 “It wouldn’t seem right if you went to see Slayer and they were dressed like The Bay City Rollers.”

S] It’s been a mighty year for Mojo Fury in 2011; critical acclaim and a high profile on the tour and festival circuits. Do you have any high or low points from the whole experience?

M] “It’s all been great! Even sleeping in a van for months on end. The highest points for me were touring with Oceansize and And So I Watch You From Afar. They are two of our favourite bands. The whole experience taught us a lot.”

S] You’re quite passionate about being a four-man-band from Northern Ireland. Have there been any bands from that neck of the woods who helped drive your motivation to pursue the rock and roll dream?

M] “Again, ASIWYFA have been leading the way for a while now. They’ve proven that you don’t need major label backing or to sound ‘commercial’ to get yourself out there. They have an amazing work ethic which has definitely inspired us and many others back home.”

S] Critics have compared you to the likes of Nine Inch Nails, Nirvana and Queens of the Stone Age. How do you feel about being mentioned in the same sentence as such bands?

M] “It feels great. I don’t think there’s anyone we’d rather be compared to. All three of those bands have definitely helped shape our sound at some point.”

S] You’re soon out again on the road on the British mainland. Are you looking forward to this upcoming set of gigs?

M] “We can’t wait! We released the album a few months ago so people should be more familiar with the tunes this time round. Also, we’re hooking up with some great bands (Maybeshewill, Lite, The Icarus Line) which will be good fun!”

S] What can be expected from your shows this time around?

M] “We’ll probably stick closely to songs off ‘Visiting Hours..’ and throw in a few new ones here and there.”

S] You’ve supported the likes of Biffy Clyro, InMe, The Cooper Temple Clause and your fellow countrymen Two Door Cinema Club on tour. How did each of these tour experiences compare with each other?

M] “Quite different! We supported Biffy Clyro when they were just about to break out from being an underground band, back in Belfast in 2005. We had only been together for 1 year. When when we supported The Cooper Temple Clause, they were just about to break up. We were all listening to both bands a lot at the time. When we used to play with Two Door, it was nothing like their current shows, slightly less people. InMe shows are intense, much heavier than most shows.”

S] Are there any bands, current or past, you’d like to share the whole “on the road” experience with? Why them?

M] “We’d love to tour with Mew. They’re an amazing band who we’ve been listening to for quite a while. Also, Silverchair would be amazing to tour with.”

S] You are currently preparing the launch of your official website, and we’ve noticed your calls for collaboration with graphic designers to get it off the ground. How important is it as a band to maintain a strong visual image?

M] “I think it’s important for your image to match the music you’re making. It shouldn’t feel forced though. It wouldn’t seem right if you went to see Slayer and they were dressed like The Bay City Rollers (or maybe it would). Sometimes bands can rely on just their looks but we like to keep a slight mystery to things.”

S] Is there a particular kind of creative person you prefer to work with?

M] “Someone who isn’t easily freaked out. You’ve got to go with the flow.”

S] It’s not just the website that you’ve got in the works; you’re in the process of writing tracks for the next album. How’s that going for you right now?

M] “It’s great, really exciting getting stuck into new tracks, like having twelve blank canvases to do whatever you want with. We are trying out quite a few different feels and sounds too.”

S] Can you tell us anything about what we can expect from Album #2?

M] “Well, its interesting because our first album was a collection of songs from the past five years of playing together, but now, this is a much more current and spontaneous writing period. We have new inspiration, possibly matured musically in some way too so id like to say album 2 will have the same hard edge with the variety of dynamics but presented in a more refined way.”

S] We’ve heard you’ve welcomed a new member to the Mojo Fury fold – Steve the goat – alongside Piglet the Cat. What’s it like sharing studio space with our animal friends? Does it have any impact on your creativity or mood?

M] “I reckon so. It’s always gonna brighten your day up when you walk in to the control room and find a goat eating a bowl of cornflakes, or a cat just sitting on your mixer.”

S] Finally, we like to pose each band we interview a bit of a brainteaser. We asked the guys from LaFaro this recently, so we thought we’d try it out with you as well… You’re putting together a four-piece Northern Irish supergroup; composed of one lead singer, one bassist, one guitarist and one drummer. Who do you pick, and why?

M] “Haha! Ok, so Van Morrison is on the vocals, then Alan Lynn (Lafaro) is on the drums, Jonny Adger (ASIWYFA) on bass, and I’ll [Michael] play banjo so i can watch the whole thing unfold… What will happen is that Van won’t like how loud Alan is playing the drums, he’ll freak out and there will be a massive brawl, we’ll all kick the crap out each other and trash the practice room, we’ll never write a song or play a show!”

M] “We just put out a free song ‘Grounds’ just go to our website and click the pig… you’ll see him when you get there.

Cheers to Mike and Ciaran of Mojo Fury for taking the time to chat to us!