Natasha Scharf is a successful music journalist. She has written for a number of publications in the UK, including Terrorizer and Metal Hammer. You may also have heard of her through her DJ work at the Electric Ballroom in Camden every Friday night, and just incase that doesn’t ring any bells, she also edited the most popular Goth-focussed publication in recent memory, Meltdown. We got the chance to share a few words with the writer about her career within alternative music and her thoughts on the scene in 2009. 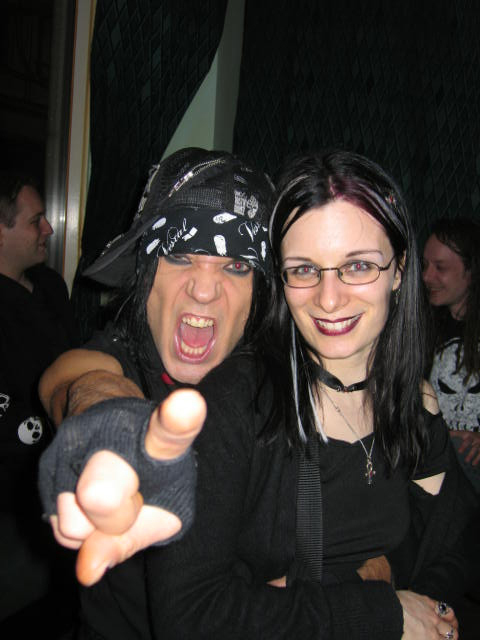 S] Can you tell us what made you want to get involved in Goth, Industrial and Alternative music journalism in the first place?

N] I have been writing about music since I was a child – I started my first music fanzine when I was seven years old. As I have always been attracted to alternative music, that was what I wrote about. It’s always what I have done but it wasn’t until I got older that I realised this could actually be more than just a hobby. I went to university and read a degree in journalism, funding my studies through freelancing for local newspapers and writing band press releases. My first job after graduating was as a features writer on a classical music magazine – I set up Electric Ballroom in Camden around the same time to give myself another writing outlet which would allow me to focus on the music that I personally enjoyed. Although Meltdown was a non-profit-making fanzine, it gave me, and several of the other writers whose work I published, a chance to be heard by a much wider audience. It was through Meltdown that I got head-hunted by TotalRock in 2001 and by Terrorizer magazine around 2002.

S] Do you still have the same passion for music journalism that you did when you first started out?

N] I still have the same passion for music journalism – it’s my way of communicating to the world. The more I find out about, the more it excites me. There are many days where I will listen to CDs I’ve been sent and not really feel much emotion – it’s all things that have been done before or maybe the production is very poor. Then, one day, I’ll stumble across something that will really excite me with its energy or its innovation. When I stop finding things that excite me like this, that’ll be the day I decide to quit.

S] What gets you up in the morning and keeps you motivated and inspired?

N] I don’t get up in the morning – I work what a friend termed “rock ‘n’ roll hours” ie afternoons, evenings and nights! What keeps me motivated and inspired is the knowledge that there are still many bands out there that I haven’t yet discovered and today could be the day that I discover them. I’m also inspired by knowing that there are still many challenges I haven’t yet aspired to.

S] What are your three most essential DJ tracks for your ideal playlist?

N] That’s impossible to say. It depends on where I’m djing, how big the venue is and what the audience is. For my radio show, I don’t need to worry about creating a dancefloor so I can play music that I think is interesting and my listeners will enjoy. A lot of people who listen to my show are surprised when they hear one of my club sets because it’s often quite different. In terms of music that creates a dancefloor, I’m afraid it’s the usual suspects: Rammstein, Marilyn Manson and Nine Inch Nails. I have yet to play a club where none of those bands have created a dancefloor! While I enjoy all three – and was actually into all of them long before their music was made available in the UK – I have to admit to being guilty of overplaying them in clubs simply because the majority of people enjoy dancing to their music. If I play to a smaller goth-only crowd, I can get away with a lot more than if I play in a 1,000+ capacity venue.

S] What do you think of the Goth and Industrial scene right now in 2009?

N] There is so much variety available that we’re all becoming quite spoiled for choice. Sites like MySpace and YouTube have provided platforms for unsigned bands all across the globe to have their music heard by an unlimited audience. Quite often a lot of this music is deservedly unsigned but it still provides an outlet that wasn’t there a few years ago. Music manufacturing used to be very expensive but now it can be done very cheaply at home and this really has created a very rich and diverse music scene, of which Goth and Industrial are very much a part of.

As with any scene, you have good, bad and mediocre goth/industrial music. To be honest, in terms of the number of good bands coming out of the scene, it hasn’t changed very much there’s just more stuff out there and more people are able to access it. It’s about quality rather than quantity.

S] If anybody else wants to get involved and make a career out of such a niche as Goth/Industrial, what would be your recipe for success?

N] I honestly don’t think it is possible to make a career from the goth/industrial scene – I don’t! The majority of my earnings come from the metal and indie scenes because that’s where more money is, certainly in the UK anyway. Over here, goth has long been perceived as something a bit sad and pathetic – even the UK goth bands themselves only play gigs as a hobby mostly at weekends. In Europe and the US, it’s seen as something you could make a career out of but I think you’d be shocked if you knew how many of even the larger gothic rock and metal bands still have day jobs…

S] In as much detail as possible can you tell us what has been your defining experience as both a DJ and a writer in your career thus far?

N] I don’t think there’s anything that has particularly defined my career just yet. Everything that I have achieved, I have worked extremely hard for and, as a result, rarely have time to actually reflect on it before moving onto the next thing. Certainly getting a documentary commissioned for Radio 1 (Beyond the Pale, 2002) was a dream come true but as with anything in the media, everything is so disposable that I think it would be dangerous to dwell too much on past achievements. We should live in the present not the past.

S] Can you tell us some of your worst as well – again in as much detail as possible?

N] Of course I’ve made some wrong decisions and I’ve screwed up a few times but I don’t regard anything as being my worst experience! There are things I might cringe about – like not being properly prepared for band interviews, playing a CD that skipped at a club, having the playout computer reboot in the middle of a live show or running out of batteries mid radio interview – but at the end of the day, these things happen – they’re part of the job and you learn from your mistakes. The longer you work in the industry, the less likely they are to happen, the less embarrassing they become and the easier it is to work around them so most people wouldn’t even realise something had gone wrong.

S] What about the experience where you have felt the most challenged – maybe nervous, we all know this industry can be so hard?

N] I feel challenged every day. Yes this industry is extremely hard (not ‘can be’, it is) and you’re only as good as your last piece of work – no one’s job is ever safe, even more so if you’re a woman. The media industry, and particularly the music industry, is one of the most sexist areas to work in and there will always be someone out there looking to run you down for their own gain. Every time I DJ at a club, I feel challenged – what kind of audience will turn up? Do I have the right music? Will my equipment break? Every time I write an article, I feel challenged – have I asked the right questions? Is this what the editor wants?

For me, DJing at the Electric Ballroom in Camden every Friday makes me nervous because I used to go there when I was younger. I want people to enjoy the music as much as I do, even when people come up to me and ask where the dj is because they’re expecting a man to be up there. My job is to create and maintain a dancefloor – it can be very soul-destroying to put on a wrong song and clear it. I get nervous every time I submit a review or a feature because I hope I’ve portrayed that band in the right light and people won’t think I’ve got hold of the wrong end of the stick.

The music industry and people’s tastes in music change all the time. If I ever stop feeling challenged or nervous, I will know I’ve gone as far as I can go so it’s time to change career. It hasn’t happened yet.

S] What are the Goth/Industrial bands that we should be looking out for? Any particular favourite you have from the North at the minute?

N] Most of the bands I’ve been getting excited about recently have been Scandinavian bands so they’re very far north! I’ve spent a lot of time in Helsinki on business and the endless creativity of the Finnish music scene never ceases to amaze me.

In terms of Uk goth bands, I’ve got a good feeling about Adoration but the most interesting stuff is actually coming out of the “artrock” scene. Bands like Romance, KASMS and White Lies are clearly more inspired by post punk acts like Xmal Deutschland, Siouxsie and the Banshees and Joy Division than a lot of the bands calling themselves “Goth” on MySpace. Watch and wait for the darlings of the media press to start calling them “nu goth” and remind us that black is really the new black…

S] As an alternative writer you have achieved everything it would seem, and you have made a career out of something you love – what is still left for you?

N] I certainly don’t regard myself as having achieved everything! There are still plenty of things that I haven’t achieved – I haven’t had a book published for starters nor have I ever written for a foreign publication. I think people have an overly-optimistic view of the media industry and they assume it’s very glamorous and well-paid, which it rarely is. I do what I do because I enjoy it and the constant challenges it provides me with. At the end of the day, a career is a career, no matter what it is in and you can never truly reach the top of any career nor “achieve everything”.

S] What are your major plans for 2009, and the things that you are looking forward to most?

N] I’ve got some more guest DJ slots planned – I always enjoy playing around the country to different audiences and getting to meet different people. I would like to get some more foreign DJ slots and explore more overseas music scenes. As usual, I have lots of projects in the pipeline but I’m always nervous about discussing them before they’re signed sealed and delivered! Needless to say, I’m not planning on giving up just yet!

For more information and to book Natasha, check out her Myspace.