Pantheon are the paragon of what a young British metal band should be. Determined to be all that they can, they’ve have been on a hiatus of sorts, a working holiday, to hone their sound and focus their energy to recreate themselves as an honest, “balls to the wall”, proper British metal band with what promises to be an awesome new wave sound. Here, We have a chat with brothers Matt (lead guitar and backing vocals) and Simon Dawson (bass and lead vocals), the long-locked blonde twin core of the band to try and squeeze out of them what we have to look forward to. 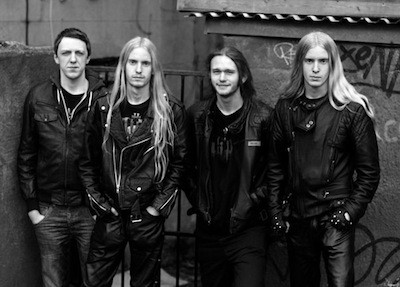 As a band based in York, Pantheon have mused long and hard on their position in the metal scene and the music industry at large. Matt says: “York is easy to brush off as a bit of a dead end in comparison to Leeds or Manchester, where people go for big gigs. But there have always been a lot of things going on in York, lots of budding metal bands. It may perhaps be lacking in venues, but York is just as good as London. There is just as much competition and it’s just as hard to get signed.” And would they consider moving away to somewhere more cosmopolitan? “Granted, it would be good to be in a bigger city – if you look at it from anybody else’s perspective, it’s quite a small area. In order to develop as a band you have to look outside of it sometimes.”

Is there a future for Pantheon in York? Perhaps, Simon adds, “There’s a ladder, and we believe that you should aim yourself up that ladder, whether that’s the best guitar player in York or the world. It’s always good to think big, get further than the local music scene, and look outside to where your audience really is.”

Over the years, Pantheon’s audience has been slowly growing and growing, and many have asked why they would want to change. The style hasn’t changed, Matt protests. “We didn’t want to lose what we have; it’s the structure that’s been honed in. We’ve gone for a more traditional structure, going back to what we love, the sounds of [Judas] Priest and [Black] Sabbath. We want to play what we as metal fans want.”

Their working hiatus then was almost an existential crisis. The pair asked themselves what it means to be a British metal band. The answer? The act of being honest. “We’ve spent our time writing, refining our ideas into something that comes from us. We’ve knocked down what we had, and built it up again from scratch. We’ve kept what is essentially Pantheon. “

Pantheon have used this time to discover who they really are, and what they want their music to do. “We’re a British metal band, but we’re trying to bring something new to the table. We’re tipping our hats to the old style, but we’re firmly in the 21st century.”

Part of discovering their core as a metal band is figuring out where they stand in the music industry as a whole, Matt continues: “There’s not a lot of our type [metal acts] about; it’s a good time to be a heavy British band. In Europe, and Germany, this kind of music is really popular; it feels like there’s something missing here in the UK.” You can tell that both of these metal-heads are proud of their Yorkshire heritage, “Simon’s got a Yorkshire accent, you can’t cover that up.”

With a new producer, Pantheon have been pushed to think about their band as a business as well as a creative outlet. The producer is Zak Bajjon, who has worked with the likes of Cradle of Filth and Venom, so he knows what he’s doing. Matt comments, “Zak pushed us as musicians. He’s brought the best out of us and given us the tools to survive in the industry.”

It boils down to this: Pantheon know what they’ve got, within the band and out there in the world, they’re going to use it, and you are not going to know what’s hit you.

Over the past year, the four individual cogs of the machine that is Pantheon have been collectively investing more time and money into taking the brand to the next level than they ever have before. “I feel like we’re moving forward together. Speed isn’t everything, but the efficiency of the songs that we’re creating is a good sign that we’re working well together.”

Pantheon capture honesty and energy in their new EP. Though not a live recording, they have strived to channel the power of a live recording; “We’ve focussed what we wanted to do. We’ve tried to utilise all our skills, including our abilities in vocal work. We’ve been vocally challenged in the past, and melody is something we’ve always lacked; it gives us another dimension to our music.”

What are we to expect lyrically? The content is quite topical, reflects Matt. “The best lyrics that come out of us come from raw emotion. If there’s something we feel passionate about, we’ll write about it.” So what sort of thing does this consist of, love, sex, hate? They say it’s a reflection on politics. “We’re trying to express it in a different way from the one that you might expect.”

We know that the new EP will be called ‘Intervention’. So is Pantheon set on changing the landscape of UK music with evocative lyrics and heavy as hell sounds? “We’re not preaching, but giving our perspective. There’s room for people to take the meaning of the songs their own way too.”

The group’s previous songs have drawn more on fiction than the harsh realities of life, ‘Blade Runner’ being the perfect example. Their hiatus has made them more politically aware, “Metal has always been rebellious in the sense that it gets people thinking. Metal brings up more intellectual subjects than just love or sex.” ‘Intervention’ has a much more interesting, cerebral approach to the subjects that provoke the mind of Pantheon. ‘Voice Of Hate’, one of Matt and Simon’s own favourites from the new EP, is loosely based upon the point of view of a suicide bomber. A very controversial subject, but neither of them shy away from explaining. Simon explains: “It’s interesting to write from that perspective. The extremist view of any ideology always affects the ‘average Joe’.”

It’s something we can all relate to. The extreme is always what makes the news, colouring the reality of the diplomatic, the pragmatic, the liberal and the normal person. Matt concludes, “For us ‘Voice Of Hate’ has the stand out riff. It’s a strong track lyrically and sonically, it sets the tone for what we’re trying to do.”

Good luck, boys. We look forward to hearing what you come out with! Horns up!