In our next artist spotlight, we chat to Vicious Precious of Pretty Addicted about her music and inspirations. 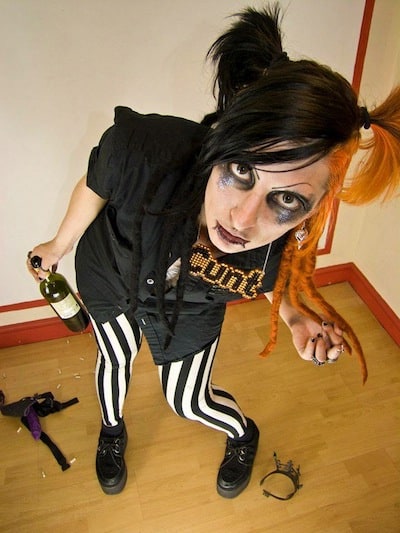 S] Talk to us about the biggest challenges when building ‘Filth’?

VP] “I’d say the biggest challenge was building a big enough audience to really sell records. At the beginning of a band there is so much PR and social media involved, to really get yourself a crowd, and getting people to be interested in you in particular when there are thousands of bands out there is definitely something that times commitment and time. But I think we did a pretty good job and we have a definite little group of Crackheads now (Crackheads is the name we have given to our fans!), though small in the big scale of things, they’re really dedicated to us and support us a lot. I can only hope our audience gets bigger and bigger!”

S] What about the biggest triumphs?

VP] “I’d say the same answer actually. Our fanbase. As I said, in the giant scale of things it’s a relatively small fanbase, but there’s enough that it’s affected our status as a band. When you get a message from someone saying they love your music and ‘Filth’ is their album of the year you just can’t quite believe it and Ben and I were just a couple of di**heads in a shed trying to make something that we would ourselves want to dance to and then all of a sudden other people care and love it too and you’re just taken aback! I still get so humbled by people’s reaction to the album and I love when we do shows and there are people who know all the words to like every song and really dance their asses off. It’s fucking amazing to be honest, what ‘Filth’ has become.”

S] There have been some line-up changes, so how will you be moving forward as we move into 2014?

VP] “Since the departure of previous bandmate Messy Ben, I have recruited two poor fu**ers who have signed their lives over to me! I joke! But yes, for live shows I have two new members for Pretty Addicted; keyboardist O/D and a drummer who I will reveal later on. For the creation of further PA music I have a few people I will be choosing from to work with when the time comes to make it, but I have basically written the entire next album in my head and at the time of getting it done I will decide on the right person to help me with the technical side of that and getting the sh** that is in my brain properly down in Pretty Addicted style.”

S] Is there a track from ‘Filth’ that you feel like is a decent indication of where you’re at as an artist right now?

VP] “I’d say the three songs that really best show where we are right now would be ‘Lipstick Mess’, ‘Wasteman’ and ‘Back(Stabbers) In The Twilight Zone’. They’re the songs I’m really going to consider when I eventually start to write the next album. It’s the darkness, the ‘donk’ and the euphoria in those songs that are really what Pretty Addicted are about. Also songs like ‘You Make Me Sick’ and ‘Clown’ are lyrically very relevant to the current, and constant, state of Pretty Addicted. The message in songs like those is something I am always going to convey.”

S] What experiences inspired ‘Fear Myself’?

VP] “‘Fear Myself’ is a little insight into the dark parts of my head. It’s a song I wrote to myself, about myself; it’s a song about mental illness really. A dramatic conversation with myself in the mirror about masochism and self-destruction and watching myself kill myself but playing both roles in the dramatisation – the killer and the victim. About being my own worst enemy and how nothing – not even drugs, prescribed or otherwise – can get me away from the fact that I am stuck with myself. The day I wrote it I wasn’t in a good place, let’s just say that much! It’s a very deep song with many levels and I like the idea that some people may not understand it.”

S] If you could come up with a Frankenstein’s monster for the Pretty Addicted sound, what would it be made of – for example: the head of Modulate, the arms of Grendel etc?

VP] “The clown of Pretty Addicted. It has to be the clown. The first set of shows we ever did we always had a clown come onto the stage and scare the audience then strip and perform in crude ways. It has always been the Pretty Addicted ‘mascot’ shall we say. I think I might bring the clown back actually, been gone too long and crowds are due a good scaring again!

S] It’s been a while since we’ve spoken to an industrial act, what’s your opinion on the “scene” currently?

VP] “Well, to be honest I wouldn’t class us actually as industrial at all. In fact I think the one thing about us is that you can’t put us in a genre. I mean of course we’re electronic but what kind of electronic? Not even I could class it and I always want to keep it that way; it’s good to be unique.

As for my opinion on the industrial scene I’d say there are a lot of industrial bands I like and there are a lot of industrial bands I don’t like. I would say the main problem with the industrial scene is that it is its own worst enemy, industrial fans constantly complain about the music and yet don’t pay for gigs as much as other crowds do – for example, the metal crowd – and therefore how far can industrial really go as a scene? There’s too much whining that, ‘So and so band went commercial’, or ‘so and so sold out’. And there’s a lot of small minded-ness which is an utter shame and actually frankly, I’d say not enough industrial bands look outside of industrial to create their sounds. So where some people say bands are ‘selling out’, I say they’re ‘thinking outside the very fucking small industrial box’. It’s a shame that people complain so much, there’s a lot of good music out there – in all genres! Although, there is a hell of a lot of sh** out there too. That ‘same old, same old’ sh**.”

S] You’ve got some cool remixes on the record, how did the collaborations come about?

VP] “I really wanted Die Sektor to do a remix, I’m a massive fan and get on really well with the vocalist, Edwin so I asked him and just made that sh** happen! It was an honour to have them do a remix and I fu**ing loved their take on ‘You Make Me Sick’ as it was something so different and edgy and at a slower tempo too which really separated it from the original. Jos from Grendel was looking to do some remixes and Jamie Nova (DWA) offered them a Pretty Addicted song to which he said yes and, seriously, I was ridiculously chuffed as they’re definitely one of the bigger names in the scene and would definitely get us attention! When I first listened back to their remix of ‘I Would Fu** Me’. I was just fu**ing overwhelmed. Really, really awesome. And then there’s the Modulate boys! Those crazy lads! They are good mates of ours so we were over the moon when they agreed to do a remix especially because their production is amazing and their version of ‘Beauty In The Chaos’ was everything we thought it would be. I mean you can’t fault it. But I’m sure they already know that.”