Yorkshire’s own Proxies have managed quite the feat; mixing dubstep and rock influences in with bucketloads of enthusiasm in a way that is interesting for any fan of challenging alternative sounds. In celebration of this achievement, we sit down with the band’s founder Jordan Fish to talk about the year that has been, and what the future holds. 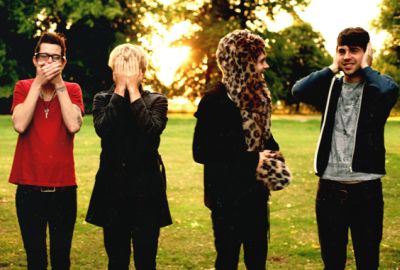 S] It’s fair to say you guys are building up a strong pedigree in terms of your sound and your performance. What’s the world of Proxies like for you right now?

J] “It has been pretty hectic. One day we’ll be playing a show and the next day we’ll have a recording session at the other end of the country. Last week we’ve had a recording session last through the night and end at 8am on the same day we recorded our BBC Introducing session 200 miles away at 6pm, by 8am the next morning we were back in the same studio working again. Jumping from studio to studio, and trying to remember which songs we’re working on for particular day has become an actual genuine concern! But, being busy is good because it means we are doing things other than sitting at home and playing ‘Skyrim’.”

S] You’ve roped in Gareth McGrillen of Pendulum to produce your new single, ‘If I Had A Penny To My Name’. How was the experience working with an artist you are inspired and influenced by?

J] It was weird but not for the obvious reasons. I’ve known Gareth for a couple of years so, the strangest thing for me was the switch from knowing him as this dude that plays XBox games exclusively on easy mode (and still struggles) to a ‘studio ruler’ with a ton of great ideas that somehow can make our songs come to life. I think for the other guys it was one part exciting, and one part terrifying at the beginning, but Gareth made everyone feel comfortable really quickly.”

S] Do you think this collaboration will lead to further things with the rest of the Pendulum guys?

J] “At this point we’ve worked with Gareth on the production for two more songs and we’re hoping to keep working with him in the future too.”

S] The video to ‘If I Had A Penny To My Name’ has a great concept; can you tell us more about it and how and why it came about?

J] It was super-simple actually, we had zero budget for the video but wanted something worth watching. I’m hugely adverse to the typical ‘band-playing-in-trendy-location’ style vids, so instead we asked Jordan Green (who edited the video), to join us for a weeks worth of days to film whatever happened and our friend India Whiley filmed some additional footage when Jordan was at university. We wanted people to see something authentic and not have to watch us mime along to our own track in a forest, on a beach or in an abandoned warehouse! We’ll save the trendy abandoned buildings to make our live sessions videos look cool or something.”

S] Not only do your fans star in the video, but you’re inviting anyone who’s seen you live to send in their photos to your website. How important is it for you as a band to have a close connection with your fans?

J] “I kind of feel like our band is more of a series of inside jokes with the people we’ve played to and interacted with. I think anyone that has been interested in the band for a little while will know what I mean by that. In reality, they’re entitled to the journey of what we’re doing as much as we are. This belongs to them just as much as it does to us and I hope I can come up with ways to always keep them involved.”

S] It’s been a busy past year tour-wise for you; what have been the high points, or low points, of your time on the road in 2011?

J] [Laughs] “There have been so many low points. Our van broke down on the way to our first festival booking and after five hours of being towed to various recovery points, we had to pull out of it. A crash on the way to a show last week wasn’t much fun. We played in Coventry once and I was kicked out of the hotel at 4am so spending the night walking around the mean streets of Cov was probably one of the worst for me. I was propositioned by a homeless person though, so perhaps an optimist would say I could have gotten lucky that night (I didn’t).

High-wise though, there are a bunch too. Our first two shows with Hadouken! were overwhelming and some of our favourites to-date. We played with Patrick Stump on [vocalist] Joe [Todd]’s birthday which was definitely a unique birthday for him. The first time we switched from making our own way to shows with our gear in various cars, and actually traveled together in the lil’ bus was pretty special too. I think any show where we have performed an after-show acoustic performance on the streets is an indication we really enjoyed the show. In Cambridge we ran away from the police because, apparently, we were playing music in an area where music is forbidden. Thinking about it, there are way more low points in our touring of 2011 memories but the high points definitely feel a lot higher than the lows feel low.”

S] We love the story about how you ended up supporting Patrick Stump on tour after Tweeting him. What drove you to do that and did you really anticipate he’d take up your offer?

S] If you could approach another artist in the same way, who would you aim for and why?

J] [Laughs] I’m not sure. It was completely spur of the moment and not calculated which is why it worked I think. But the cool thing about social media is that you can contact artists directly so anyone is always an option, I guess.”

S] We hear you’re on the bill for the HMV Next Big Thing tour in February. How are you feeling about being a part of this and where do you hope it leads you to?

J] “Oh it’s awesome, if you look at the line-up for the past years there are some amazing artists in the HMV Next Big Thing Hall of Fame so it’s super exciting for us to be invited to do it too. I’m not sure where we hope it leads; I think the most we ever really hope for is that it allows a few new people to discover and enjoy our band.”

S] As well as that, there’s also a tour with Canterbury kicking off in January. Can you tell us anything about what else you’re going to be up to in the near future?

J] “We have a bunch of material we’re super-excited to get out there. We’re working on a series of live sessions which we’re filming and recording, in which we collaborate with some of our friends and more people we admire, and we’ll give away the tracks for free. Beyond that, we’re putting together more shows and another video!”