For our latest Reverbnation spotlight, we chat to Joe Tacke from Dallas-based indie-pop band Spook Easy. 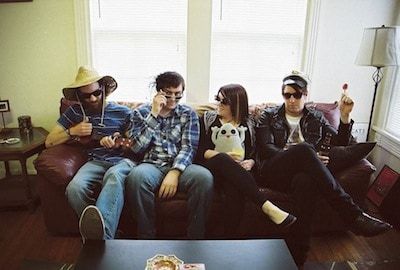 JT] “Well, first and foremost, all four of us are huge fans of music in general. We all listen to a pretty wide variety of music. We do seem to lean on the surfy, psychedelic pop side of things. Although, if it was made between the 50s through the 90s, I’m sure you could hear some of all that in the songs. Not to say that the artists in the past 10-15 years aren’t great. Some of them are the real deal and obviously some of them are just plain terrible.”

JT] “Anything! If it inspires us, it can end up in a song. Logan [guitar and vocals] and Stephanie [keys and vocals] wrote all the lyrics for our last two records. Stephanie’s songs usually tell these beautiful little poetic stories. Logan’s songs tend toward the ethereal. He can really paint a mental picture that takes you on a ride. The new material we are working on has everyone taking the lyrics as well as the music a bit more seriously. More focused with more thought.”

JT] “We are working on quite a few new tunes right now. We are more focused than ever on really defining our sound. There is one song in particular called ‘Shadow Kind’, that we’ve just recently started adding to our live set. It’s a pretty dreamy psychedelic tune with a very hard rock chorus and a little after halfway through, breaks into a full gallop.  It’s a fun song to play and the fans seem to really enjoy it. We are definitely a rock band, but we always strive to keep a pop sensibility.  When it’s all said and done, we want you to sing along.”

JT] “We love you and keep spreading word!  Some of our biggest fans call the UK home. We hope to get over there soon.”

JT] “A lot of energy. We are probably a lot louder live than people would expect from our records. We love a little noise and don’t shy away from it. Mostly, we like to play well and have fun on stage.  If we’re not having fun, how could expect our fans to?”

JT] “Probably the same as most young bands: getting our name out there, selling records in the current climate of the music business and making sure club owners don’t stiff us. We’ve had a bit of success locally, but we’re ready to start branching out.”

JT] “We’ve been shopping around to some labels and hopefully we’ll find one that’s a good fit for us. We are sort of a DIY band, so there’s no major rush.  But, it would be nice to have someone else in our corner. We’re also planning touring a little and recording another record. Maybe an EP or LP, but either way that will definitely be coming out next year.”