For our latest Reverbnation chatter, we speak to Tanadra vocalist Tanya Medina about her music, the band and plans for 2013! 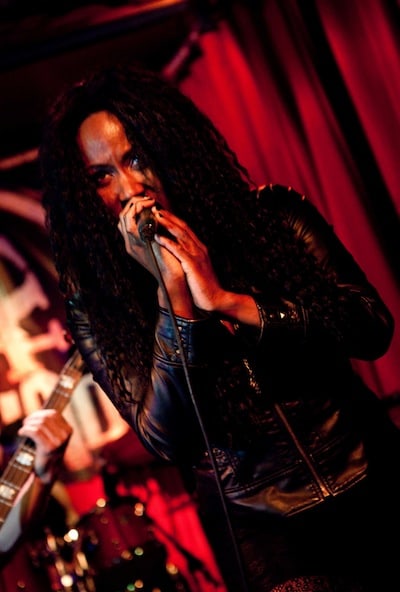 T] “Wow! I have so many influences. We could be here all day! I truly am envious of my parents’ era of music. I’ve been influences by groups of that era, such as Led Zeppelin, Queen, Thin Lizzy, Pink Floyd, Tina Turner and AC/DC. I also draw inspiration from influences such as Nirvana and more current bands including Muse, Foo Fighters and Coheed and Cambria.”

T] “I’m truly inspired by my everyday experiences. I’ve done so much so far; I’ve been pretty much all over the world. Antarctica, Germany, Greece, Italy, London, Ukraine, Poland. I think being a black chick in rock music, at first folks were a bit ‘stumbled’. That motivates the engine inside my head to take those experiences and put them into music. I like telling a story and building off that. From my first EP to where I am now I’ve grown. I want to build an album based on a motif. Like writing a book or a short story. Let’s put it this way; life inspires my songs.”

T] “What’s up UK fans!? I’m working really hard to get my songs into the UK scene. There’s a free download of my single ‘Release You’ which I am giving away until further notice. It’s a pretty rockin’ tune that I’m sure you’ll enjoy. All I ask is you just share my Facebook page and anything Tanadra to your friends and request me on the UK radio stations. One more thing, I’m super excited about the new material I’ve been working on and can’t wait to show you the new song ‘Not Alone’ produced by Michael Tobin [Newtonbach].  It has very cool musical elements, intense guitar riffs and the drums by John Wooton are just brilliant. This will be followed by the music video directed and produced by Daitai Genjitsu which will be released in January or February 2013.  Thank you for supporting me.”

T] “You can expect a bunch of new songs and a lot of a mixed batch. We are proud of our music and will play everything. The band is on top of its game, and I am not plugging bullsh**. Our new songs have an ‘epic’ feel. I’m really pushing to build up enough attention to get us on a UK tour. We want to make our shows unique and we want a theme. This is why we are constantly working on ideas and execution.”

T] “One of my biggest challenges is the fact that everything we’ve done thus far has been completely self-funded. I am just an average hard working girl that believes enough in her talent to take a chance on her passion. I never look back and I always focus on what’s ahead. I am truly an independent artist. I know many folks appreciate that. It is very expensive to be an artist and as you know, being a successful artist takes dedication, talent, passion, belief and fans. You have to do shows and get the word out. It can cost a lot of time and money. The other thing is that, there is so much competition and it’s also still a very male-dominated genre. To get noticed and even looked at by managers, agents and even labels you have to come twice as strong and four times as focused just to make a dent. Believe me, I intend too. I believe I’m already on the right path and it’s just a matter of time.”

T] “With our new songs, new mind-set and new direction on our visions as band, we have plans to hit the road in 2013.We’ll start off in our hometown of New York City then branch out, with an sights to head to the UK. Be sure to check out my site for updates and look out for my new releases!”