Tears Of Ishtar is a progressive rock outfit that formed in 2006 and gave York’s alternative community a strong lesson in how to play dark, heavy and vibrant music that is both abrasive and challenging. Unfortunately, at the height of their buzz, the five-piece parted ways in 2008, and it was unclear as to whether the they would ever reform. Now, in 2010 with a rejuvenated new line-up and a renewed passion for creating hard-hitting sound, Rob and Mike East, Jack Hammerton (guitars) and Greg Parsons (drums) are back and on fine form. We catch up with Rob to talk about the band’s reformation and latest plans. 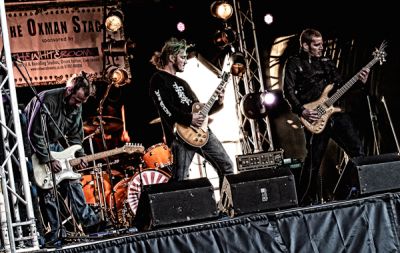 “We are venturing into unknown territory”

S] What’s been going on with Tears Of Ishtar since we last saw you as regulars on the York scene around 2006 and 2007?

RE] Not a great deal to be quite honest! The band amicably split a couple of years ago and we all retracted back to our other projects. Jack, Mike and I always intended on reforming the band at some point, and that point has finally come.

S] How have your inspirations and goals as a band changed?

RE] Good question. We are actually about to embark on a fairly ambitious project that will fundamentally alter the way that we write and perform music. Essentially, we have been critically assessing the ‘live performance’, taking into account the inadequacies of standard on-stage monitoring, lighting, ambience and all that stuff. The main thing will be the introduction of strings and phonic effects underpinning the guitar compositions. To an extent, we are trying to lessen our reliance on guitars. As far as tech goes, we are moving towards in-ear monitoring and preset layers underneath the live performance. It’s going to be interesting.

S] We saw you perform at Galtres Festival 2010, can you explain what that was like for you guys?

RE] We really did enjoy it as it was our first live gig. I do like playing outdoors as the sound has a lot more space to move around in. My only criticism with festivals however is the lack of line-check, soundcheck and equipment check. I think this will become more of an issue for us moving forwards as we are not a band that can simply set up and play (nor will be become one). We had a couple of fairly significant issues as a result, but all-in-all, we loved it and hope to get on some more festival bills next summer.

S] How’s the inspiration different now for Ishtar in contrast to your work with Idle Jack and The Big Sleep?

RE] Idle Jack was a completely different animal to Ishtar. The approach, the sound, the direction, the inspiration, the challenges, the personality dynamic, the vocalist [or lack thereof], the target audience. The list goes on. Strangely, three fifths of Idle Jack form Ishtar but it couldn’t be more different in my opinion. I would need a double page spread to accurately articulate a full response to this question but I’m sure you get the idea!

S] What have been some of the biggest challenges of the last few years for the band, and how did you overcome them?

RE] Finding a new drummer was by far the hardest challenge. Martel (of Honeytone Cody) left due to his family commitments and the fact that he couldn’t invest the time into both of his bands. He was, at that time, effectively irreplaceable.  The impact of this was such that we didn’t even consider a replacement drummer as a viable option. It’s really taken us all this time to find a suitable candidate for the drum stool – and thankfully we have found Greg (who also drums for the splendid and well respected RSJ).

S] Will you be doing anything differently this time around as a band in contrast to when you started?

RE] As previously mentioned, we are looking to make big changes. These changes are by no means cosmetic. We are, for our parts, venturing into unknown territory but I am confident that this will yield the results that we are looking for, mainly due to it being both a shared objective and a much needed collective shift in our respective musical careers (if you can call them that). I think that the contrast between sections will become noticeably more accentuated in terms of overall effect. Crushing riffs will be more destructive whilst downbeat sections will become utterly bleak and sombre.

S] Are you planning to tour and record this year and into next?

RE] It’s always on the cards, yes. We have a lot of work to do but we are planning on a doing a few gigs in the coming months. I think a recording is in the pipeline too. We just need to make sure that we are all fully happily with the material (which is harder than you think given Mike’s continually fluctuating rendition of what is good and what is not!).

S] What kind of themes and ideas are you looking toward for major inspiration in terms of new material?

RE] We have discussed adhering to the mythos of the Ishtar story to some degree. I’m not particularly sold into that idea but it is an interesting approach to consider nonetheless. The obvious stumbling block is linking the music to the theme. It’s probably more relevant to keep in line with a certain mood or feel. If you want to use that as a marker, then you can expect more orchestral arrangements and low-fi compositional pieces. I think that it’s easier to portray tragedy and sorrow in music than any other emotion. Oddly though, it doesn’t necessarily reflect our overall view of the world. We are quite a happy bunch really!

S] What inspired the reformation of the TOE project?

RE] It was really just a matter of time to be honest.  Greg coming on board effectively ended the hiatus and we literally started rehearsing within days of him joining us.  It was always going to happen at some point and I think it happened at the right time for all of us.

S] Can you take us through the composition process for ‘Trials Of Descent’ and how that worked out – what inspired it because there are loads of different styles and changes of pace?

RE] I’ll be honest when I say this; I don’t actually know how we got there. The fact is that it takes an inordinate length time to get from point A to point B – A being ‘having nothing’ and B ‘having something that is finished’. Some of the material is from the old Ishtar and lots of it is new. The fact that we had a skeleton of a song to begin with helped a great deal. Getting all of the sections to mould seamlessly together is usually the most challenging part but I think we have figured out ways in which to circumvent ‘painting oneself into a corner’ so to speak.

S] What do you think the biggest challenges are for bands coming out of York now, and why?

RE] We’ve pretty much been looking in a different direction getting this project up and running so I can’t really comment objectively on what those challenges might be.  As a band we share a view that there is a distinct lack of variation in the bands that come off the end of the conveyor belt in general; which I believe goes someway to explain why turnout to gigs appears to have waned somewhat in recent years. I think that up-and-coming bands should be mindful of this if they want to inspire and entertain any potential audience or fanbase. Things get done once, then done to death by everyone else in the music industry. If you aren’t particularly bothered about ‘getting somewhere’ then this doesn’t necessarily apply but I personally wouldn’t jump up enthusiastically if I heard that York’s newest heavy metal band was playing up the road on my day off.  Been there, seen it, done it.  Next!

S] Your random question – in the event of a zombie outbreak, what weapon would you use to defend yourselves and why?