The Mission Veo is an innovative group promoting their passionate and strong take on post-punk, (now) at a global level. Indeed, this US-based five-piece have gone from strength-to-strength and are now ready to take their live show to Germany for the world-renowned M’era Luna Festival next month. We chat to bassist Ryan Nolan about the music, plans for touring and more. 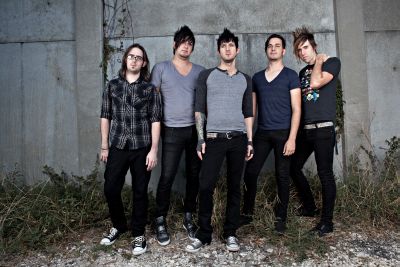 S] How are you looking  forward to your European date at M’era Luna?

R] “We are really excited. We know some people that went last year and they said they had blast so a few of us were planning on trying to make it out to M’era Luna this year just as spectators. Now, we get to play for everyone and go to the festival!  Double bonus!”

S] Is there anything  that you are planning on doing while you are in Europe?

R] “I personally plan on eating some food and enjoying some Germanic culture. I have German background and my family hasn’t been back to Germany for generations so for me it’s a really cool experience to be able to get in touch with my roots and at the same time rip faces on stage! We’re really coming over just for this show so we won’t see much of Europe aside from Germany, but I imagine we will be back soon enough for a full tour.”

S] Do you  feel that you fit in to the goth and industrial-style of that showcase?

R] “Absolutely, we are all huge fans of the scene and have been since we were kids. We grew up listening to bands like Funker Vogt, Skinny Puppy, Wumpscut and we’re heavily influenced by dark post-punk stuff like The Cure and Sisters Of Mercy. I think these influences definitely shine through in a lot of our material. Our music may not be quite as heavy as some of the Industrial bands on the line-up but we’re a dark dance-punk band that definitely fits the theme.”

S] Can you talk to us about the writing process for ‘Strangers’  and how you worked together on that?

R] “Strangers was written in a dark room near a swamp at a time where we all felt extremely creative. Each song just kind of evolved on its own from the previous and we seemed to really tap into something with that album. Generally, one of us would bring a riff or melody into the room and present it and everyone would add their parts and build the song organically, rather than talking about it and planning it out first. It was a very natural process and it worked very well for us.  The songs on “Strangers” built themselves in that regard, we would analyse structure and refine from that point but for the most part we all just came together as a unit when writing.”

S] What were some of the  biggest challenges in making that record?

R] “Our biggest challenge came from outside sources at that time. We were in a relationship with a very parasitic label during this time that was very destructive and would often times try to turn us against each other in order to control certain aspects of our sound and album. Looking back this added conflict, probably worked well for our sound but we’re lucky to have made it through the experience! It took a lot of trust and reliance on each other to figure out where the issues were stemming from. Let’s just say that we’re very happy now to be working with Spiralchords!”

S] Can you talk us through the inspiration behind the ‘New York Scum’ single – where were you  when that was written and what inspired it?

R] “That was the first song that was written for the album. It was that song that kind of thrust us into the limelight and got everyone’s attention. The inspiration behind that tune was really to explore the textures and complexities of a living city. On the surface the city seems illustrious but like anything there are many layers to it and we just really tried to explore it and capture it by blurring those realities and perspectives. The lyrics have multiple meanings depending on whose eyes you’re looking through – what you take from it is up to you. Different people tend to pick up on different vibes from the song so in that regard, I guess we accomplished our goal.”

S] Is there a song  that you feel best encapsulates what TMV are about?

R] “We all have different favorites so it’s hard to pinpoint one particular song that would summarise what we’re about. We tend to look at everything skeptically and try to inject anti-establishment themes where possible. The one thread that seems to re-occur the most in our music is the disassociation of most people with real issues that often leads to societal problems on a global scale, whether it be apathy, war, or just personal challenges that we face in a deteriorating society on daily basis. We’re all strangers in one way or another, I guess that’s the theme.”

S] What  message do you have for fans of your sound here in the UK?

R] “We’d like to thank all of our fans for their support and making it possible for us to come out there and play. We draw heavily from our fans and their ideas and creative energy so don’t be strangers! We look forward to hanging with you all at the festival!  Eat darkness. Love, The Mission Veo.”