Spotlight: They Fell From The Sky

Home » Spotlight: They Fell From The Sky

Recently we had the opportunity to chat with Pitchshifter drummer Jason Bowld about his new project They Fell From The Sky. In the interview Jason talks about new music and working with like-minded musicians on the project including Colin Duran (of Hundred Reasons) in order to achieve his goals and incite some pure sonic anarchy. 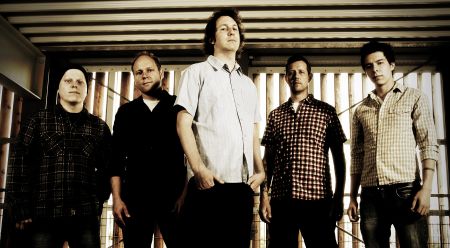 “This project is the only thing that matters”

S] What events let up to the creation of the band?

JB] Colin and I both talked at the end of ’08 about creating a new band – I decided to terminate This is Menace and really liked Colin‘s voice because of the ‘musical’ potential it has – I started writing with Dave Draper, a local guitarist and we bashed out 16 songs in three months – in came Lee Erinmez from Snuff on bass and finally Oly Edkins on guitar too – a marriage made in heaven but without the intercourse.

S] What themes and ideas dominate your current material and where do you access your personal inspiration?

JB] Because we work to no specific timeline or ego-driver to get ourselves seen at every gig in London or in the press for ‘farting one Sunday morning’ – our material comes from a very organic place – we definitely have our own sound and because we all have very unique styles – TFFTSTFFTS is the only thing that matters – not us. is an organism in a laboratory that has been carefully nurtured by five fu**ed-up scientists –

S] Have the individual members drawn much inspiration for TFFTS from your individual projects including This Is Menace, Pitchshifter and Hundred Reasons for this new band – obviously there is a strong alt-rock lean to the sound?

JB] Our history is just that when it comes to the sound of TFFTS – we all pride ourselves with being able to ‘rip things and start again’ and this is the same mindset with this new band – it’s fresh and a total regeneration of our styles – that is what being creative is all about.

S] Can you tell us about one new track that resonates particularly well with you personally, and why?

JB] I really like the vibe of our debut single ‘Crush this World‘ – it has self-destructive tendencies which is something we all have – the ability and need to fu** everything up when things are going too well.

S] Can you tell us about the creative process when it comes to the new album and what are you most looking forward to about unleashing this album next year?

JB] TFFTS is very much a band that writes like a band – very rarely does someone bring in a song fully written and say this is how it is. Almost everything is conceived in the rehearsal room and if it’s not working within two or three hours it never usually sees the light of day – When we get round to releasing something next year it’s going to be really exciting to see people’s reaction – I think people are going to surprised maybe even shocked about how twisted a vocalist Colin Doran is!

S] If you could have a TFFTS release party dinner, and you could invite one person – anyone – who would you pick to have dinner with you, listen to your music and eat with you?

JB] I think Professor Stephen Hawking would be a pretty interesting guy to have at the dinner table maybe paired up with Charlie Bronson.

S] You guys have already got some grand support slots and live dates planned, what do you most look forward to about taking TFFTS out live and do you have any plans to expand on the visual impact of the band on stage in the future?

JB] So far our live shows have been awesome, energy-driven and almost play-like in the way they are constructed. We pride ourselves in structuring a set that resonates with people’s guts – they either sh** themselves or cry – or both! In terms of visual impact – we’re certainly not going to dress up in an Admiral’s outfit – we don’t want to rely on any props or expensive production at this stage – we’re having far too much fun refining our stagecraft – that’s where is starts and ends for us.

S] Personally, can you tell us about your biggest plans for the rest of the year and into the next including work with PSI and on this new project – can you tell us how you are looking forward to it?

JB] We have a couple more smaller shows, then we will continue to finish our album and think about the next phase. In terms of PSI – that is ticking along nicely – it’s a completely different beast though to TFFTS – Jon [Clayden] is writing everything with guitarist Brian Harrah in the USA where he lives so it’s a completely different type of release for me – My creative input with Pitchshifter is more drum and production-driven –  I have to say things are sounding brutal at the moment.

S] How has your attitude to the music industry and music in general changed since you began your career up until this point with TFFTS?

JB] Obviously the industry has dissolved somewhat – you don’t necessarily need a record deal anymore – just good ideas and strong creative drivers – people have missed the point anyway in the past – i.e. just writing music and churning out sh*t to make money – but hopefully we’re approaching the dawn of a new mindset that makes music more timeless and less money driven.