In our most recent spotlight interview, we have an entertaining chat on Skype to Hugh Donlon and Joe O’Connor of four-piece Irish indie band, Third Smoke. We talk to the guys about their upcoming UK tour, the band’s self-made music videos, and plans for the future. 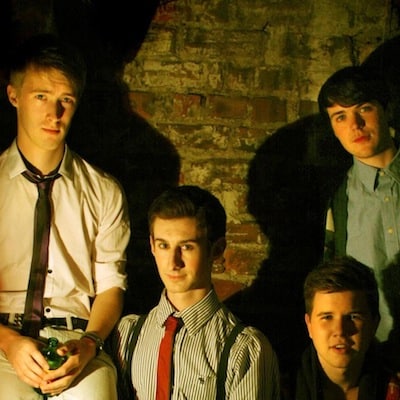 To start we asked how the band got their name. Vocalist, Hugh explained how the idea came about. “We came up with Third Smoke because a couple years ago we were sitting in exams and I was doing a French comprehension about trench warfare oddly enough. Instead of dealing with the question at hand I was daydreaming about coming up with a band name. There’s a superstition that comes from trench warfare that it’s bad luck to take the third light of a cigarette if you’re in a group of people smoking socially. The reason that came about was if you’re in the trenches back in the day and getting the light of a smoke the first person to get theirs lit would catch the attention of an enemy sniper, the second light he’d take aim and then on the third one (Lead guitarist, Joe makes a popping noise), yeah he’d shoot. And that’s what I was thinking about during my exams instead of actually dealing with the exam at hand, and we ran with that. Also I think a third of the band members smoked at the time so we thought, ‘oh yeah, that’s really cool’.”

With very catchy and vocally dominant songs, we asked how the recording process for the vocals comes about. Joe explains, “We get a main vocal and we find that if there’s just one vocal and no harmony it lacks a fullness to the overall song so we usually start just messing around with one person coming in then another person.” Hugh adds, “I suppose in the recording process one of the things we’ve gotten fond of doing is getting all of us in around one microphone and singing at the same time to get a big crowd as opposed to putting one vocal down one after the other so to kind of make it more authentic. On our EP we got in maybe 20 of our friends to hang around the mic for a much bigger chorus. In the main vocals a lot of times we’re trying to get better at singing so we progressively write songs we can’t sing and then use that song to teach ourselves how to get better.”

The band has put up several of their own self-made music videos on YouTube, all with a very light-hearted and comical feel. Hugh tells us what inspires the ideas behind their videos, particularly for their single ‘People Are Messy’ which thematically we are told, is “kind of an observation of how things happen throughout life, it’s like a patchwork quilt of everything that would be happening and it all effects who people are and how they make decisions. The chorus is an optimistic take on it anyway even with all that mad stuff happening, good stuff will happen.” Of the video, Hugh reflects: “It was maybe five months in the making. We finished writing it and then we decided it was going to be recorded and a single. And from that point we were trying to come up with the idea. That was many a drunken night’s shooting the banter and coming up with some stupid ideas. And we spent a lot of time coming up with a way to tie them all together that would make sense for anybody watching it. There was a good bit of thinking on it but then there were a lot of random ideas that came about out of nowhere. In doing the videos we got struck by the fact that in a lot of music videos there’s this idea of presenting people as super-cool and super-removed from everybody else because they’re so ‘edgy’, which I think is not very cool or real. So for us we tried to present it more like what we actually are like; kind of silly and we take the piss. There are serious undertones in the video in terms of content, but we just did it in the most light-hearted way possible, it’s how we deal with musical ideas generally. So we try to deal with things that are actually relevant to us but we don’t take ourselves massively seriously.’ Joe adds, “There’s a fine line between trying to be funny with a little bit of seriousness. We don’t try to be the funny band or try to be a ‘sunglasses and women on either side’ kind of band.” Hugh adds.

The guys explain the process of recording their EP ‘Tell A Friend’? Joe says, “We recorded most of it at the end of 2010, it took just a week. We did a week of recording and just got friends in.” Hugh adds, “It was about a week just slapping down tracks, then we got loads of people in and were experimenting and stuff with a crowd which we’d never done before. So there was a load of people management that we weren’t aware was going to be as difficult as it was. When you bring like 20 people into a room they get fairly distracted and you’re like “We’re paying on the hour, come on let’s just do this and get it done!”

Tofinish our conversation Hugh explains what we can expect from Third Smoke in the future. “We’re going to be in the UK the first week of April, I think we’re hitting Manchester, London, Liverpool, and a lot of places we haven’t been before so I’m looking forward to that. And then when we finish that we’re coming back to Ireland and launching a new single called ‘Peacock’ which should hopefully have a video out for end of April depending on how much we get our s**t together. And before we release the single we are releasing a big cover video that we’ve been working on behind the scenes. It’s Disney themed, there’s a Disney connection to the song we’re covering. And that should be out at the start of April if everything goes according to plan. That’s short term, I suppose long term we’re aiming to have an album out in 2014!”