In our latest spotlight, we chat to Kin, vocalist of Melbourne Victoria alt-rockers Twelve Foot Ninja. 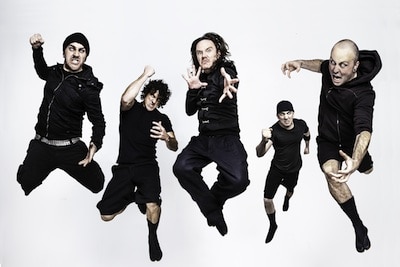 D] “My Dad first and foremost. He was the one who insisted on implementing my musical education. Musicians or artists who push the envelope, or stand on their own. Namely at the moment, Meshuggah, Ernest Ranglan, Trifonic, 60s R&B, and mid 90s Jungle. And also film and game soundtrack composers like John Barry, Amon Tobin, Jasper Kyd, Michael Mann, and Ennio Morricone.”

D] “Ideas come from anywhere: films, literature – books or magazines, music, conversations, and observations. We all have an eclectic range of tastes. I personally have an interest in politics, and western foreign policy, which provides me an abundance of themes, and issues to work with for my lyrics. Films and articles on political analysis seem to be the main sources at the moment.”

S] What song that you are working right now best defines your sound, and why?

D] “It changes all the time, but for me it’s the title track from our debut album, ‘Silent Machine’. It incorporates a gamut of styles (which is our schtick), and lyrically has a connection to our live shows.”

D] “We are hoping to get over to the motherland as soon as possible! If you would like to check us out in the flesh, sign up to our mailing list on our website: www.twelvefootninja.com. The more people into us, the more likely that we’ll get over there. So, if you like what we do, join our mailing list – that way we’ll know where to tour. My Dad was born in the UK, so I would also love to explore my heritage.”

D] “Five guys, giving it everything they’ve got.”

D] “It’s deciding on a setlist for our January and February album tour of Australia.”

D] “To continue doing what we do, and hopefully make it over to see you lot real soon.”