Our reporter Doka Chapman delves deep into the mind of Johnny Violent from Norfolk-based hardcore electronic band Ultraviolence who have been peddling their powerful alternative sound since the early 90s. We talk influences, labels, dream collaborations and more. 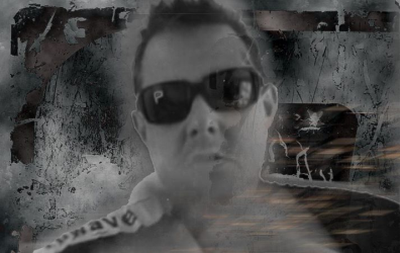 “I am really proud to have made ‘Life Of Destructor'”

S] What music were you brought up listening to?

J] “My parents only listened to classical music – I just liked the catchy pieces – children can’t be expected to look for depth and meaning in music. When I was eight years old, I fiddled around with the radio and tuned to Radio 1 – the only popular music I’d heard up to then was 70s sh** like Shawaddywaddy and a bit of Elvis and The Beatles, neither of which I’ve ever liked. The first music I loved was punk – the first 7″ single I bought was ‘C’mon Everybody’ by The Sex Pistols – I still love that ‘Rock ‘n’ Roll Swindle’ era Pistols and I happened to watch the film again the other day – the Julian temple commentary’s really interesting. I also liked the early electronic pop – Gary Numan was the first one to bring those synths to the charts. As a teenager I got more into punk and started liking metal too – Motorhead, Judas Priest, AC/DC – I still listen to those bands now. I started making music when I was 16 – I got into more underground industrial music from the US, new beat from Europe and the rave scene just was starting here. I’ve also always liked film soundtracks – if you put the above together plus a bit of my own imagination you get the sound I originally wanted for Ultraviolence.”

S] How was it that you got signed as the only dance act on Earache records?

J] “I approached Earache in 1993 to make just one single – ‘I, Destructor’ – as that was just about pure noise and that is what they were known for doing, although with bands with conventional instruments. Digby Pearson, the label owner, happened to be well into hard techno, liked my music and asked me to sign a long term deal to make albums for the label. Earache were looking to branch out from metal at the time and signed a couple of other dance artists – notably Signs Ov Chaos which was Michael Wells of chart toppers Technohead (‘I Want to be a Hippy’) – but it didn’t work out with any of those acts and by 2000 Earache had gone back to being a pure metal label, which worked better for them as a brand. I was still on the label but it didn’t go very well after that.”

S] When you released your first album [‘Life Of Destructor’], what was the initial reaction?

J] “There was much ‘Why is it so fast…why is it so noisy…you can’t dance to that?’ murmurings, but generally it was liked by critics with a 5K Kerrang rating and a reasonable 7/10 in NME are fairly representative. It wasn’t a huge release, with no video, radio promotion or touring so it was quite easy to ignore. I had hoped that it would set the musical world alight, which was naive, but it carried on wowing people for many years afterwards, long after the generic industrial and rave dirges of the time had been forgotten. I’m really glad and really proud I made a record like that and wasn’t tempted into any sort of compromise.”

S] From your back-catalogue, which release do you most hold dear?

J] “Well, the last question has got me thinking about ‘Life Of Destructor’ so I’ll go with that, as it was the first and 17 years on it sounds mighty fine! Seriously, I put much thought, work and soul into all the Ultraviolence material and I stand by any of it.”

S] What were the best and worst gigs you ever did?

J] “I played a festival called Invocation in 2000 at Tutbury Castle in Shropshire – if you look at their website you can see the house and castle area at the back – that was our backstage area! I really was king for a day! There were around 1000 up for it people and the gig was brilliant, everyone was really friendly and no stupid ‘rock n roll’ hassles at all. What a day out, and I even got paid for it!

Conversely, in late 1995 I toured the USA with Cubanate – for three weeks nearly every one of the audience in American industrial scene ‘rock ‘n’ retards’ hated me – it was quite funny to begin with, but by the second week I was close to losing it, and by the time I got home I had serious problems, which lasted for a few months. I never went back.”

S] Where did you get the inspiration for ‘Pyscho Drama’?

J] “The first album was a compilation of music I’d written over the previous eighteen months or so, but contained several film samples that Earache couldn’t clear, so many were rewritten using my own lyrics and sessions vocalists. I liked that way of working and wanted to expand on the idea by creating a whole script – thus ‘Psycho Drama’ was created. I had trouble expressing myself without being either hysterical or distant at the time, hence the two characters. I was also interested in the dark side of human nature and so it was good to explore that. Critics seemed to believe it was an attempt to expand to the ‘rock operas’ of the 1970s which it was not, and it was born out of much more practical considerations. In retrospect the voiceovers do sound a bit like a Radio 4 play, which was a danger I was aware of at the time, but did nothing about it! The album is generally a vivid representation of how I viewed the world at the time. People found it hard to understand and with follow-up ‘Killing God’, I did something more straightforward, and so more popular.”

S] You are currently writing new work, does this mean a new album is on the way?

J] “Possibly – I am just enjoying writing music again. A long-term illness drew a neat line under Earache era Ultraviolence and if I’m to release more albums they will have to properly promoted releases – not just something stuck in a far flung corner of the Internet. Meantime, I’m very happy that a few people can enjoy my music for free. We’ll see what happens.”

S] The best of ‘Blown Away’ was err, a best of your work, did you have difficulty choosing the best songs? And do you feel you left some good ones’ out?

J] “The tracklist wasn’t an artistic concern. There were just 2-to-3 tracks from each album that were the ones that got the best reception – live, the most club play, people emailing etcetera. Personally I like them all, but that would be a box-set not a compilation!”

S] You have remixed many bands in the last 20 years, are there any favourite memories of working with them (touring etc)?

J] “I enjoyed touring round Europe with Misery Loves Co who were really great people and had such brilliant music; a genuinely hard and industrial band with mega lyrics. My remix of their track ‘You’re Not The Only One’ was done shortly after the tour and I consider it to be my best work – not bad considering I had motion sickness from being aboard the tour bus for 14 hours a day! Someone just put it on my Facebook page 14 years on. I love that.”

S] Lastly, if you could pick any band to remix or work with today, who would it be and why?

J] “My favourite track right now is ‘Nuthouse’ by Stocker – that guy makes some seriously fu**ed up hardcore and I love it. I don’t know what I’d do with him apart from drink beer, though. People to work with. I like to take brilliant, world-class vocalists and put them up against really hard-edged beats with huge industrial and symphonic soundscapes. Goldfrapp and Eminem spring to mind but until I put out some serious, brilliant releases I’d be better off pinching myself awake than getting distracted.”