Spending time in the company of Stevie Ze Suicide (also known as Steve Roberts), you realise you are talking to a musician who personifies the rock and roll dream and its waves and troughs. With over 35 years creating music on his own and as part of bands including UK Subs and Cyanide, he’s in a position of knowledge and experience on how a career in a cut-throat industry impacts on one’s personal life. 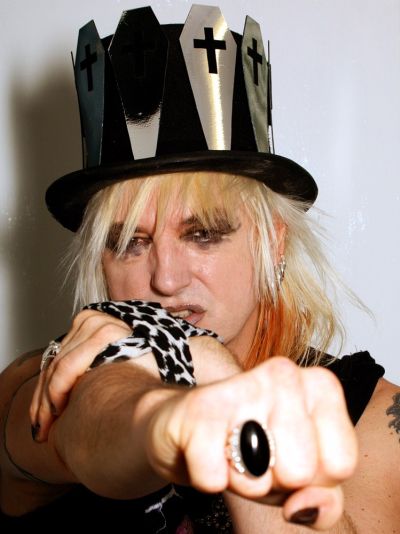 His new musical project came about after spending a few years unsigned and making an attempt to avoid being actively involved in the scene. “I even worked in a supermarket for a while,” Stevie adds, “I’d do anything to get as far away from music as possible in order to view what I was going back into without influence. If I’d have stayed in London, I’d have been swimming around the same old scene, and I didn’t want to do that.”

The current stage name is indirectly inspired by working on the album with Trevor Bolder, bassist on David Bowie’s Ziggy Stardust and the Spiders from Mars and a man who Stevie regards as a great friend and mentor. Recalling the studio sessions, he adds, “I wanted to invent something new, and I said, ‘I’ve got to have something like Ziggy Stardust.” Stevie was dissuaded from his initial first choice name of’Ziggy Suicide; “Everyone said, ‘No, don’t do that, because they’ll think you’re a covers band’.”

Settling with Z Suicide, it was John Spence, engineer at Hull’s Fairview Studios, who picked up the mantle of inspiration. “He used to put Stevie at the top of the daily sheet with Z Suicide, and I thought, ‘Yeah, that’s got a certain sort of rhythm to it, but it can’t be Z.’ I know this beautiful chick called Z, I couldn’t just pinch her name, so I added an E to make Stevie Ze Suicide – and suddenly it was similar to: Stevie Ray Vaughan, Marilyn Manson, Alice Cooper, Stevie Ze Suicide. And I thought, ‘This is great’.”

Mention of Alice Cooper takes Stevie back to the early days of his music career, when the artists of the glam rock era inspired not just himself, but other luminaries such as Adam Ant, to get started. “If I’m a product of glam rock, I am, because that’s what I listened to when I was a teenager, and it’s instilled with me,” he remarks. The image projected by the cornerstone acts of the punk movement also found favour with the young Stevie. He remembers buying the début New York Dolls release on the basis of its cover alone. “They’re all slumped on this settee as if they were out-of-it trannies with cigarettes in their mouths, and I thought ‘Great, I love it’,” he says. “I bought that album not knowing whether it could have been a country and western album, but because I thought ‘These guys must sound f***ing brilliant because they look f***ing brilliant’.” 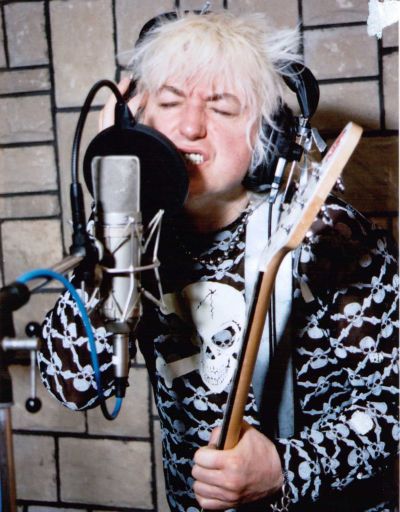 The emerging punk scene in York provided a further catalyst. “I’d been in this York punk band called Cyanide – Bob De Vries and Jock Marston – they’re dead now – they were brilliant guys,” Stevie fondly recalls. “The first time I saw Jock; he came on stage, he struck the first note and he had all this talcum powder in his hair, he shook his head and it went all over the place and I thought, ‘That’s f***ing great! I gotta be in a band with these guys’.” Remaining with Cyanide until their split, he soon joined the UK Subs as a drummer (after touring with Cyanide in support of the Subs), acknowledging “I was just in the right place at the right time, it was nothing to do with my skill or anything.” He performed on-off with the band over a 27-year period and still holds his band colleagues in high regard.

“The most inspiring thing that ever happened to me was being in a band with Nicky Garrett. I think he’s a genius; in a way, I think we held him back a lot, because he had all these brilliant ideas. I’ve never known a guitarist be so active on stage – maybe the only person I could think of is Angus Young (AC/DC),” Stevie observes. He is also in praise of UK Subs’ frontman; “If it wasn’t for Charlie Harper, I’d never have picked up a guitar and I’d never have had the guts to perform like I do.”

He continues, “One thing Charlie taught me is ‘If you’re gonna chase Rolls Royces, you’ll always be running five yards behind them, but if you stand still and get your act together, one will pick you up.’ Also, he said ‘Don’t give a toss about what other musicians say.'” This is a pearl of wisdom Stevie has held onto down the years, expressing; “If I’m out of tune, great, but I’m f***ing loud, because it’s real. I don’t want to watch a band that’s rehearsed every minute for ten years – they bore me. I want to watch a band that’s gonna fall apart any second.”

Harper’s grounded ideas were also manifest into the UK Subs sound. Stevie retells the story of a recording session in a rural retreat: “The record company put us in these posh studios with a limo, 24 hour house call, full board and lodgings, swimming pool, tennis courts, go-kart track – and you could record there if you could be bothered! We loved it, but Charlie hated it, and that’s where ‘Down On The Farm’ came from. When Guns N’ Roses got a hold of that, it was Duff [McKagan] who wanted to do it because he was a big UK Subs fan, but I think him and Axl thought it was about rehab or something!”

Looking back on his career, Stevie can fondly recall encounters with musicians and how he came to realise how down-to-earth even the most popular bands could be. “The first time I was working with Freddie Mercury, I was terrified because I thought, ‘What’s he gonna be like?’ He had this reputation for not being an easy man, and he was the most lovely man, ever. I remember sitting having pizza and chips and he’d get things for me. We talked about Bob Dylan; Freddie was in the biggest band in the world, and he was the most enthusiastic musician.” Another remarkable introduction resulted from Stevie working on a music video shoot with Iggy Pop, whom he describes as the nicest man in rock and roll. “He was laid on the floor getting this camera angle from above, I was just stood there and he says, ‘Hey man, you’re in UK Subs, man!’, and I say, ‘Yeah’. He goes, ‘Awh, great, love that music!’ and he was talking to me in a minute as if he’d known me for years.”

Regardless of the people he has met or worked with in the industry, Stevie has upheld the punk ethic in his approach to music and to his life. He is sceptical of music elitism, adding, “I think every form of music, whether it’s country and western, hillbilly, rock and roll or whatever; there’s something there for everybody. There’s no such thing as bad music, as somebody will like it somewhere. I mean, I produce very loud, bad music, and I’m sure some people like it.”

Stevie believes an element of elitism and tenacity exists in York. He acknowledges: “When we were doing ‘Top Of The Pops’, which I did about nine times, we used to do it with the Nolans, Bananarama, Spandau Ballet; we’d all be drinking in the bar and we got on great. As soon as I came to York, I’d see people in bands – I won’t mention any names, but I want to put this across – and say ‘Hi mate!’, and they would just ignore me, like I was in some kind of weird competition.

“I don’t think music is a competition, I think it’s an expression of your inner artistic capabilities,” he analogises. “I’d rather somebody come up to me and say, ‘I’ve wrote this little poem scribbled on a bit of paper,’ than someone who comes up and says ‘Hi, I’m Mr. Big, I’ve got a 70 thousand pound car’ – that’s bollocks. The bit of the scribble on the bit of paper that might be a little bit of a poem – that’s reality.”

Stevie’s perspective on the state of the music industry has been affected by the period of three to four years when he wasn’t signed to a record label. “From being 18-to-19 years old, I’ve always had a record deal,” he comments. “Those four years were the best of my life; I could play and write what I want without someone in a suit saying ‘I don’t hear a single’ or ‘Maybe we should do this, and change that’.” It was during this period that Stevie Ze Suicide was born, without the influence of record company employees. He believes this has had no impact on his musical output; “Now it’s coming from me, people want it. I don’t know how well it will do, I hope people like it, but if they don’t, that’s all I can do. If anybody takes exception to it, all I’ve got to say to them is, ‘I’m sorry you feel that way, but this is what I am’.”

Stevie is upfront, yet pragmatic, on who he is and what he wants out of life. “What I want to achieve is contentment; knowing that I’ve always stayed honourable to my art and not compromised anything. I’ve had drunken nights, I’ve had drunken fights, I’ve had depression, times in a mental institution – and I apologise for nothing, it’s been a great trip.” He is strongly passionate about celebrating the importance of his fans who have kept up their support through the years, adding, “They’re what it’s all about, not me. I’m not a hero, they are the heroes and I love them.”

Looking to the future, Stevie is hopeful to take his album on tour, either by the end of 2011 or into 2012. He says enthusiastically, “I’ve got two projects on the go for line-ups. I want to do it acoustically. The record label has even brought in a string quartet for me.” He also hopes to find new bases to create and refine his sound: “I’d probably buy a place in Chelsea because of the history of the place, I like being there, but I’d like to live in the Lake District.” What, therefore of the present? Of the tracks which will appear on the forthcoming self-titled ‘Ze Suicide’ album, the one Stevie feels best sums him up is ‘Sex ‘N’ Drugs’. Why? “It’s because I’ve survived drug addiction and alcoholism, and come through it without going bald.”

For more information you can visit Ze Suicide’s website.