York: not really known for its rich vein of performance art, nor particularly synonymous with the performing arts themselves… But times are changing. In recent years both The Studio at Theatre Royal and Walmgate’s Space 109 have staged art performances, but until now we have had little access to regular events at any fixed venue. 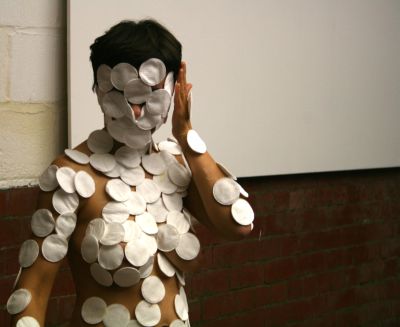 Enter O U I. Describing themselves as a “not-for-profit, artist-led organization curating live time-based performance art”, they are a collaborative venture between artists, Victoria Gray and Nathan Walker.

On October 9 the newly founded organisation, O U I Performance presented one of the most accessible performance art events York has seen in months at the Bar Lane Studios’ Basement venue: O U I PERFORMANCE NIGHT #0. Working alongside Gray and Walker were artist, Roddy Hunter, and performance artist, Sofia Greff.

To give an overview of the work, it was not driven by text, instead by action and image. Nor was it directly political as one might have expected after Hunter – whose poetic imagery opened the show on an explicitly political note – but instead implicitly so.

For instance, Gray created figurative action around the setting fire to and movement around a roll of cotton, and its relation to her body and her clothing. In the process she took fully into her mouth the tights that she began by wearing and, drawing her dress away from her body and over her face, removed her facial identity in the presence of her femininity; but did so without exposing us to any specific ideology. Similarly, Greff appeared before us naked before covering herself with cotton pads; removing her direct identity – and creating sculpture – after having exposed to us her humanity. In these pieces the distance from direct political allegory and instead the focus on atmosphere through image played with the political tone set by Hunter and with our expectations and experiences as an audience.

When dealing with the atmospheric – and when dealing with O U I we most definitely are – one can not avoid the atmosphere created by Nathan Walker and a bottle of White Spirit. He covered the floor with the chemical and we expected fire, yet the absence of fire, and the rising vapours, created the atmosphere, both literally and metaphorically incendiary. As he chanted, screamed and hoarsely groaned into a tape recorder the single word “ghost” until he could physically do so no more, we were taken into a transient state one part spirits, nine parts O U I.

Individually, these pieces were undoubtedly solos. However, the artists used thematic action to draw themselves together and into the event.

Gray and Walker intend to continue featuring guest artists. In interview, they stated: “It is our curatorial mission that we programme regional, national and international artists at varying stages of their careers in order to further the development of contemporary performance practice in the region.” To date, they have worked with a variety of artists, including Jurgen Fritz of Black Market International.

The result is an event rich with a blend of themes and practices that no inflexible unity could achieve. Continuation of this structure suggests that prospective work will maintain freshness and variety; also, it indicates an interesting formative structure, exemplifying the potential in and for networking, in both the logistical and artistic-performative spectrums.

Varied in content but rarely in quality, the work was engaging and at times enrapturing. The only negative criticism lies not with the performers but instead with the venue: the Basement has yet to install easily accessible WC facilities, and, as the winter months draw in, it seems obvious that audiences will not want to queue on the footpath. From an artistic perspective however, O U I PERFORMANCE NIGHT #0 presented its audience with an outstanding event.

Despite the popular inclination towards alternative entertainments, O U I filled the house and will return to Bar Lane Studios on November 13. We are told to expect “A 9 HOUR DURATIONAL EVENT” which is to be directly broadcast online as well as easily accessible – and freely – between 12:00 and 21:00. This time the work will feature artists Judit Bodor, Mark Greenwood, Justin McKeown and Kiki Taira as well as Gray and Walker.