Upon entering York’s dedicated arts space Bar Lane Studios to check out Six Lips Theatre and their production of Samuel Beckett’s ‘Footfalls’ this writer isn’t too sure what to expect. Indeed, Beckett’s texts have proven to be a struggle for many to interpret and with good reason. 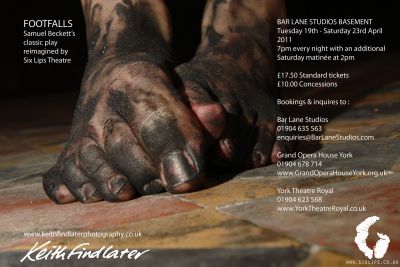 Immediately, we are plunged in to a ghostly world of darkness (created by set designer Jess Mather) which really stand out above everything else we see tonight; blackened walls, old tattered objects and papers are strewn across the floor to achieve great effect (in fact, without the set much of the impact would be lost) and unnerve the audience (the opening of this production seems to bring together some of York’s premier creative talents from event organisers, other resident artists at Bar Lane to local musicians).

Once the lights dim, we are met with an eerie silence and then some faint muttering from a voice behind us – The Voice (coming from Roxanna Klimaszewska) is that of the main character May’s mother. May is portrayed as this lost soul, doomed to repeat her existence over and over in a “cell-like” room where she cares for her mother (who may or may not already be dead or, a figment of May’s mind).

As the audience we get to experience this overwhelming feeling of being forced to stay in this space. We are forced, as the director (Hannah Wallace) wants us to be, to experience the character of May’s own personal hell as she repeats the same part of her life over, which translates here as two half hours of text repeated exactly. The four parts of the hour-long production predominantly feature May pacing the room (taking nine seconds each time as Beckett instructs in the original text) to do so. Not that this becomes so uncomfortable that any of us want to leave, but there is definitely an urge, a desire that is born from the director’s mind and her need to put us in May’s position. It’s is this clever and antagonistic way of operating that makes the work of Six Lips so awkward and appealing at the same time – their aim to create an “immersive piece that captivates, implicates and engages” is fully realised here.

What of Anna James’ portrayal of May? The character is delivered very well. Again, she operates as this ghostly and other-worldly character that is completely lost, alone and devoid of hope. As depressing as that sounds (and is), James gives the role a real added impact with her shaking body movements and desolate facial expressions – she’s no goth and it’s clear that she isn’t a “cry on cue”-type of performance artist – here, she taps into something much deeper and darker to mull over the focus of “it all” (“it” according to the creators should be open to interpretation and is still widely debated when considering Beckett’s original work); James clearly uses a mix of personal emotions and feelings that perfectly echo how this character feels, her distress and the painful acceptance of this cruel fate. This idea is further pushed with the use of lighting as it not only acts to denote different parts of the play but also to disorientate the audience by breaking the repetitive tone.

Following the production, we are treated to a film titled ‘Sequel’ by local film company Parashoots’ Paul Richardson which really sheds some light on the “ghostly” atmosphere of the play and depicts May walking around a graveyard, eventually following a spirit down into a tomb-like structure (which we can only presume is the same as one we find ourselves in) before becoming trapped in the space.

Perhaps I have read too many dark stories? or I am too fond of the typical psychologically stimulating scary movie? I think it’s a ghost story and I’m sticking with that. Noteworthy contributions have also been made to the costume department from Catherine Richards and make-up from Emily Pease who both help the other cast and crew pull of the haunting and claustrophobic themes of this production by wrapping the performer in mud and a ripped up dress that again conveys her descent into another world, purgatory and death – the dress is tattered and torn just like May’s fragile personality.

We leave The Basement venue at Bar Lane Studios feeling slightly disorientated but everything is clearer after speaking to the director Hannah Wallace who says: “It was our aim to bring the audience in to the production and echo that feeling of purgatory.” The feeling from our camp at least is that no matter what people leave here thinking; this goal has been achieved. On a similar note, it seems to have been worthwhile for the team as they progress and move forward. “We had to beg and borrow from various supporters around York (including Lush who donated the mud and clay for the walls and James’ body) but we have learned a lot about how we work together,” laughs Roxanna when reflecting on their first full-scale production. “It was very much a ‘trial by method’ approach that we adopted.”

It’s true that this method worked well for the production, but there is one clear thing here that needs to be slightly improved upon; the Voice needs to be louder (much louder) as often Klimaszewska’s words appear rambling. Other than that though, the team stays true to the original and the most interesting part for discussion is the part where James’ May makes up a story about a girl called Amy (an anagram of May) and her mother Mrs Winter to perhaps convey her own sorrow at experiencing death and talk about her past. Plenty to talk about though!