This is an event celebrating a man who is without question Hull’s greatest rock export who played guitar with David Bowie (as the leader of the Spiders From Mars), Bob Dylan, Mott The Hoople and many others. At first, people may question the organisers’ (Mick Ronson‘s wife Suzi and Spontanuity Film pub (with the previous night occurring at the iconic small-scale Adelphi venue). But then, those people should remember that Hull is Ronson’s home town and, as a typical Yorkshireman, he never made a big deal about anything. 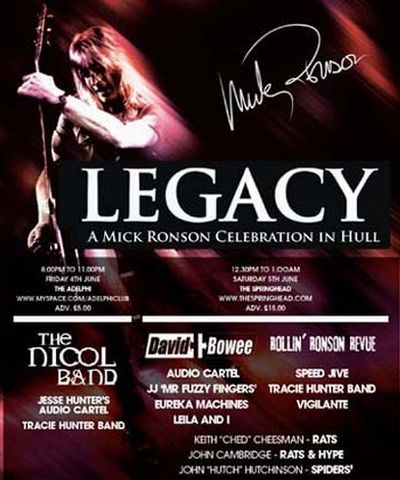 The event is of a small scale to cater for Ronno‘s most dedicated local fans and international family and friends. the event is aimed at raising money for a fitting memorial statue in Ronson‘s memory. Regardless of the venue’s size and any pre-conceptions from Ronno‘s fans and friends from further afield in attendance, the stage more than serves its purpose in supporting some of the world’s best and brightest musicians (past, present and future) today.

Before the show kicks off we manage to speak to some of the performers and organisers about their involvement in the event. First we grab a word with Mick‘s wife Suzi Ronson about how the event was put together. She says: “We had so many bands wanting to get involved in today, unfortunately we couldn’t fit all of them in this time – the response has been fantastic.” Suzi also comments on the possibility of holding future events. “We wanted to keep this year’s low-key in accordance with Mick‘s mother’s wishes, but hopefully we will be able to come back and do something bigger in the future.

“Over this weekend, with the night at the Adelphi on Friday and here today [Saturday], I am so proud of everyone involved – it’s been amazing. Mick would be so proud that this is going on in his home town.”

The event’s co-organiser Sunny Singh also reflects on the positive nature of the event. He explains: It’s been a really motivating project for me to work on, and we are looking forward to using some footage from today in the documentary we’re producing about Mick – it just goes to show you how much influence this man had because there are so many people who support him despite the fact that he died 17-years ago.”

Sunny also shed some more light on plans for other celebration events. He comments: “It’s one of Hull’s best kept secrets that there is a wealth of musical talent and bands on offer in the city, hopefully next time we will have a third day dedicated entirely to new talent in the area.”

The bands playing today are also incredibly pleased to have the opportunity to honour their hero. Audio Cartel‘s Jesse Hunter explains that knowing Mick has had a positive effect on his life. “I knew Mick because our families are incredibly close. So for the band today, it’s about putting on the best show that we can for him.”

The event seems to have also inspired long-time fans of Mick to get involved within Hull’s local music scene, Hessle native Tony Steele speaks on the the event’s impact, “Having an big show like this is a fantastic way to promote music in the city and bring people out to support local venues.”

Chris Catalyst of Eureka Machines explained how important Mick Ronson has been in his life, both personally and professionally. He said: “One of the first albums I ever bought was ‘The Rise And Fall Of Ziggy Stardust And The Spiders From Mars‘ and Mick‘s guitar playing was a big influence on me.

To be invited to play at the event meant a lot. It is so important that we keep Mick‘s name and heritage alive because he was so influential while never being an overground success. It is vital for the city to remember one of it’s most important sons.”

The day of music starts off with Speed Jive (who, at the time of writing have been together for less than a week) are an infectious and uplifting cover band that promote the fun side of good ol’ fashioned rock and roll sounds while adding a unique and affecting glam stomp to the tracks that they take on. It’s alot of fun seeing this group today and they set the mood perfectly with their take on various David Bowie numbers.  Next up, the dedicated and technically sound Australian glam rock guitarist John “JJ” Stewart plays his tribute to Mick aptly titled, ‘Mr Fuzzy Fingers‘ before SPHERE favourites Eureka Machines rock the house with their almighty blend of positive punk madness. On the set standout ‘Everyone Loves You‘ the riffs set the tone and the furious beats get a few heads boppin’ and ear-to-ear grins start to claim faces as the die-hard rock fans (of all ages) in the audience appreciate the raw approach of the Leeds-based four-piece.

Following up is the effortlessly entertaining (and visually glamorous) Leila And I with a sound that comes across on stage like a three-way collision between Lily Allen, Amy Winehouse and The Dresden Dolls…and glitter. ‘Long Time Dead‘ keeps the energetic tone of the gig thus far and the girls’ sparkly gold outfits and all-round musicianship does not  fail to impress the Hull crowd. Top marks. After enjoying a rare dose of sunshine we find The Rollin’ Ronson Revue on stage going through a number of popular tracks (including ‘Perfect Day‘) with Speed Jive‘s vocalist and then with Ian Hunter‘s (Mott The Hoople) son Jesse Hunter on vocals (pictured) for his father’s track, ‘Women’s Intuition‘ in what was a complete surprise for the singer but our pick of the day’s moments. 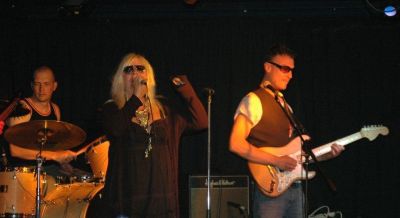 After a short break, the Hunter family strike again as Tracie hits stage with her band to perform an excellent catalogue of ballsy alt-pop that takes influence from the angsty outbursts of Skunk Anansie via the heavier melodies of Guano Apes and the sheer strength and confidence of Joan Jett. The Tracie Hunter Band surpass any expectations we had before the show here and they deserve all of the attention they have received based on the merit of their sound rather than family connections. Tracie‘s brother Jessie and his band the Audio Cartel take control next with their nu-grunge noise that draws from the classic rock sounds of Tyson‘s dad (Michael Schenker, UFO) as well as more contemporary acts like Queens Of The Stone Age and Bush). ‘Take Back Away‘ puts us in fine spirits and sees a few crowd members break out some nifty air guitar solos. We fully approve this stuff as it’s hard-hitting, heavy and emotive. As with Tracie‘s music, it’ll be a shame if this band gets to where they need to be solely on contacts rather than musical prowess – there’s a lot of potential here. 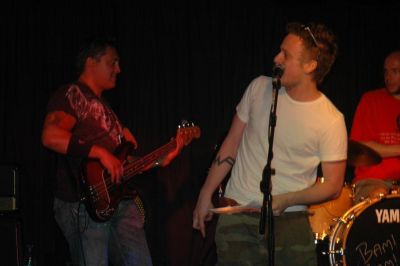 After the Cartel and a solid set of Blues rock local lads The Nicol Band, members of The Rats (Keith Cheesman and John Cambridge) and the Spiders From Mars (John Hutchinson) reel off a number of notable cover versions from artists that influenced Mick Ronson‘s career and playing style including Cream‘s ‘I Feel Free‘ and Jimi Hendrix‘s ‘Fire‘, along with a few entertaining stories about working with the man himself.

As this grand evening of live music and positive tribute to a local legend draws to a close, we are left with arguably the best David Bowie tribute on the planet, the Hull-based David Bowee (note the ees). Classic Ziggy Stardust tracks are performed in honour of Ronson to the delight of a dedicated home crowd who dance around the venue throughout the set. Standouts in this blistering live showcase include ‘Suffragette City‘ and a resounding rendition of ‘Major Tom‘. We think these guys might actually be the first tribute band that we can stand. You know how we like our classic rock heavy and real – while this group are certainly not the real deal, they are pretty damn close and so we are left, unexpectedly impressed by the outfit. Mick Ronson would have enjoyed (and been very entertained) had he been here tonight, not only by Bowee of course, but by the excellent showcase of music on offer that he has directly influenced. With talks about more events in future years (including a day dedicated exclusively to Hull’s best bands) we are very excited for the future as we continue to look back at Mick Ronson‘s legacy and beyond simply achieving a new memorial for Queens Gardens in the city.

It was a pleasure for us to be in attendance today and we take our collective hats off to the organisers and hope that Mick Ronson‘s influence will be felt during events like this for years to come.