It has been what can only be described as very long weekend indeed. Thankfully I’ve now managed to remove the boots from my feet, comb the crimps from my hair, put on a record and take a moment to breathe. A much needed respite from the madness that was this year’s Mis-fest Festival. 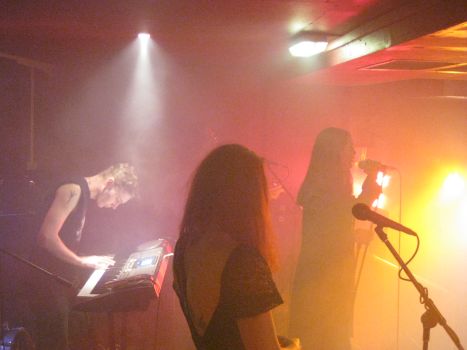 Opening a bill that included so many great acts was a daunting yet exciting prospect for us…doubly so when you are sharing a stage with artists that you respect. Had Legion not been asked to play I would have been there regardless; to hear some decent new music as well as watch a couple of old favourites of mine, the oh-so glamorous Ghost Of Lemora and the mighty titans of Gothic rock, Vendemmian.

The first night of the festival was a club night affair which sadly we couldn’t make it to, so it was on Saturday, in time for the main event, that we headed off. Soundcheck was at scheduled for 1pm which meant leaving Leeds by 10-latest. As is usual on a gig day, Legion assembled in our bassist’s living room (which is currently acting as band HQ) to get gear together and await the arrival of the big black van that acts as our tour bus, courtesy of the excellent DJ Pyromancer.

Rolling into Blackpool  at about 12:50pm, the first thing that struck the entire band was how seemingly bleak the city was… It seemed the relic of a 1960’s seaside town, which in many ways I suppose it is. This could well be an unfair judgement, but by the time we arrived at the venue there was most definitely an eerie feeling in the air. The spell was broken by the appearance of a smiling DJ Grimly Fiendish (the mastermind behind both Mis-fest and The Misery Of Sound nightclub) appearing from out of the venue to usher us and our gear in.

I shall fast forward through the long hours, mostly full of waiting around, that constitute soundchecking on a day with a crammed bill such as this one. Suffice to say that sound was checked, friends were greeted and lunch was had.

We were due to take to the stage at around 5:30pm, shortly after the doors opened, which is always a nerve-racking position to be in. Thankfully the venue started to fill up quickly, so after firing up the battery of smoke machines we took to the stage. Obviously I can hardly review our own concert due to a total lack of impartiality and also partly due to the fact that no matter how things go we’re always filled with a sense that we could, and should, play better. Despite this we had a great time (we very nearly always do) and felt that plenty of the audience did too – which is the main thing.

Afterwards we took a bit of time out to recover, although I still managed to catch a bit of The Torpedoes set from my vantage point behind our merch stall and they sounded great. Whatever ambition to sit and rest for a bit longer I may have had was crushed by an already drunk Dave, guitarist of the headlining band Vendemmian, assuring me that  I owed it to myself to get up and watch Joy Disaster. This is indeed what I did, and I was certainly rewarded. They made a noise I would happily describe as a sort of post-punk inspired Indie rock scented with an obvious streak of Goth. To my ears they sounded a bit like what might happen if a member of Corpus Delicti secretly joined The Editors (although the Corpus Delicti comparison could be partly due to the frontman’s strong French accent). They played a strong, tight set which went down very well with the crowd as a whole.

I’m sorry to say I didn’t catch much of Descendants Of Cain and only saw bits of Blood Sucking Zombies From Outer Space (and no, bits does not refer to severed limbs so there was no pun intended). The BSZFOS seemed to go down well, appealing to the deathrock sensibilities of many of the more enthusiastic members of the audience. The short medley of refrains from 80s Goth classics (I heard bits of ‘Temple Of Love‘ and ‘Love Will Tear Us Apart‘ in there) that closed their set raised a smile from pretty much everyone.

For whatever reason, the venue wasn’t as full as it could have been throughout the festival – which meant that at any time when a significant amount of people nipped out for a smoke or some food the atmosphere suffered a bit. This is something that hit some bands more than others and became more of a problem on as a late running schedule forced proceedings deeper and deeper into the night. The next band on, The Ghost Of Lemora, most certainly rose above though. I’ve seen this band a few times before and they always perform their material very well. Tonight was a bit special and they seemed to play with more raw power than usual. To add to that they’d snuck some old songs back into the setlist and even previewed a new one. Singer Richard gave an especially energetic and emotional performance, flittering between the Eldritchian arrogance of a Gothic frontman and the genuine honesty of a musician performing with his heart on his sleeve. I think this artistic juxtaposition serves to describe the Lemora sound in general, rather than just at this particular gig.

Next up was Devilish Presley, a band that have been known to me for years, ever since I first heard them on an instalment of Natasha Meltdown’s Batcave Radio. I was feeling a bit out of it by the time they hit the stage, but looking back I regret not getting up for a boogie and watching the show from the front. Even from my vantage point I could see and hear that the songs were powerfully performed and the crowd responded accordingly. Jacqui Vixen and Johnny Navarro are Devilish Presley and between the two of them they create, and perfectly execute, their own unique brand of dark and dirty rock n’roll.

The next act, Charles De Goal, were not a band I know anything at all about. Their sound would hardly have been out of place amongst the cadre of early 80s UK Post-Punk bands (despite the fact they are in fact, like Joy Disaster, French). The songs were raw-yet refined, minimal-yet-full – a confusing description I know. They create a lot using only a little. Minimal backing synth, heavy bass, raw guitars and metronomic drum machine beats (not unlike the sound of very, very early Sisters Of Mercy records) blended in with real live drumming to make this enigmatic, yet appealing, sound.

Due to the late running of the night many sets (including Charles De Goal’s) had to be cut short. Despite this it wasn’t till after 2am that Vendemmian finally took to the stage. By this late hour many of the festival goers had returned to their hotels or homes and it was becoming a slightly bleak experience. To be perfectly honest I wasn’t feeling that great myself (having been around for nearly 12 hours). Despite this, I was rewarded for my decision to see the night through till the very end. “Anybody booking us should realise that leaving us alone for 11 bloody hours with nothing to do but drink is not the best of ideas. We’re Vendemmian and we’re drunk, stupid and Goth” was the headline act’s greeting to a severely depleted audience. Quickly after they had marched on stage to the main theme of the Indiana Jones movies, there appeared an inflatable cow (a recent addition to the Vendemmian road crew), a cloud of bubbles (which had made an appearance in the audience at the very start of the night during our set) and an entire rainforests worth of confetti (which seems to have been a feature of their gigs since times of yore). If the insanity that was breaking out in the depleted audience wasn’t enough the band themselves added to the chaos with their own antics. This is a band that are famously adept at being madly drunk and still putting on a fantastic gig but tonight was something else. At one point singer Mark was crumpled in a heap on the floor in front of the stage (still singing) while guitarist Dave was sitting on top of his own human pyramid assembled of audience members, amazingly still playing. This is the stuff nostalgia is made of and if no one filmed this gig it’s be a great shame – I’m just glad I got to be present at one of the most utterly mad Goth rock concerts ever. The truly amazing thing is that despite playing with the all the style of an entire flock of (drunk) seagulls trapped in a fish’n’chip shop they still managed to play each song in perfect time with the unforgiving beat of the drum machine (despite some ‘alternative lyrics’ and some ‘improvised’ instrumental sections).

And so the evening draws to a close. This event was the stuff that live music is made of – an enigmatic evening full of highs and lows. Various issues behind the scenes made it a stressful evening for many and less than ideal numbers of people cast a bit of a shadow over the night (sadly a painfully familiar occurrence at Goth and many underground events). Despite this it was also an evening full of fantastic performances from some excellent bands and enthusiastic and dedicated music fans having a load of fun. Although it was a very long night for me I still had a great time, both from the point of view of a band on the bill and from that of an audience member.

The evening ended for me on the floor of our manager’s room at the nearby Travelodge, sleeping fully dressed underneath a leather jacket and nestled between two boxes of Legion T-shirts. The journey home the next day took a detour via Leeds’weekly Goth night at The Subculture which resulted in missing the last bus home and yet another night away from the final destination of my bed. At the time of writing, it’s Monday afternoon and I’m finally back in my own home, writing about, and still smelling of, Mis-fest 2009.