So, there are these perceptions that people have about wrestling; that it’s “too fake” or “a silly sport” are two such opinions. What do we think, you ask as a predominantly music-based publication? Well, we got to enjoy a damn good show in Birmingham for a Raw edition 2011 ‘Wrestlemania Revenge Tour’, so we’re pretty much converted. 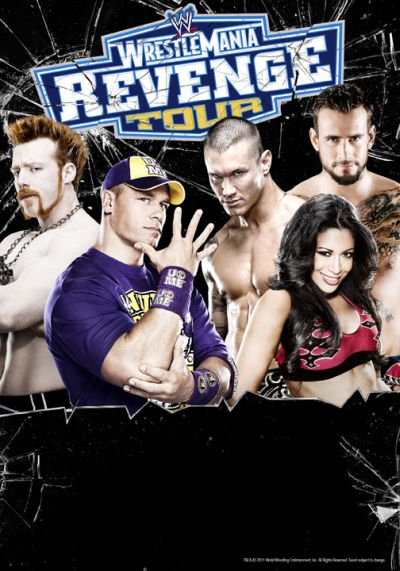 Whatever you think of wrestling and its many forms and styles, nobody can deny that the WWE have turned it into an international institution as sports entertainment. Here, thousands of people pack out the Birmingham LG Arena; most wearing John Cena’s “U Can’t C Me” top or The Miz’s frankly awesome, “I’m Awesome” shirt. Before the show, and basking in the intense atmosphere we begin to wonder why we haven’t seen it all live before (this scribe is a long-time fan despite being teased mercilessly by other members of staff…for some reason).

Thing is, sitting down to watch this “house show” (an untelevised showcase of wrestling talent), we can’t help but think about how bloody weird it is watching the spectacle without commentators! It’s a fairly big issue (for the opening minutes at least), because it turns the great show that we’ve all seen on TV in to a strange (almost eerie) experience where you are literally just watching people slam each other; no shouting of “Oh my god” or witty banter of any kind. That being said; when it comes to the action, WWE do manage to balance this card fairly well full of talent from the RAW brand – except for a very random showcase featuring former NXT talent and professional nutcase Percy Watson and the hard-working Primo Colon that has the crowd almost dead in the second bout of the night.

Another interesting (and far more positive) match choice (before the aforementioned) features the undeniably entertaining Santino Marella (and the return of his tag partner the “Moscow mauler” Vladimir Koslov) with the high-flying (and criminally underrated) Evan Bourne against Hart dungeon graduate and future world champion (surely?) Tyson Kidd and The Usos (sons of the legendary Rikishi) – this one mixes high-flying acrobatics with technical precision to great effect; the highlight though was Marella’s use of his trademark finisher “The Cobra” to end it all.

There are little things that do work really well at these shows – having kids compete with adults from the crowd for an R-Truth-hosted dance-off and a chance to meet superstars backstage is great entertainment for everyone. On a similar note having a “Fan’s Choice” Extreme Rules match between bitter rivals CM Punk and Randy Orton is a good move as they take their animosity outside and in to the crowd; a lot of these bouts mimic the more popular long-lasting rivalries and as the night goes on, the bigger names that we talk about do get to show their skills to the delight of fans. There are very rarely surprises in matches on world tours (a title will more often than not, stay with the person who walked in with it), but there is still great entertainment value as the later bouts here are hotly contested and provide a great excuse for fans of all ages alike to chant for their favourite star.

Other positive points in the show come in the form of a John Morrison (our tip for the next WWE champion, FYI) competing against the slick and well-rounded athlete that is Dolph Ziggler (his noisy “cougar-like” manager Vickie Guerrero is strangely absent though). This one (featuring two of the most innovative talents in the business today) sees the tone of the night really picks up and the energy of this Midlands crowd starts to develop. Indeed, it could be said that the biggest weakness with mid-week and house shows is that the excitement of the taped/aired shows seems to be absent and as a result it’s not until the bigger names like Morrison, John Cena and Randy Orton appear that the crowd’s feedback reaches the type of fever-pitch one might be used to watching at home in their armchairs. Obviously, we appreciate the idea that building anticipation is necessary, but we think that big names right across the board (a few from each brand) for every night particularly for shows outside of London where the taped episodes are often hosted while the WWE is touring. All that said, we do get treated pretty well…

Aside from Punk versus Orton and Morrison versus Ziggler, other decent matches tonight pit divas Eva Torres against Champion Brie Bella and newcomer Sin Cara against Alex Riley; the latter one is particularly exciting and showcases the immense talent of this new star. Tonight (and throughout the rest of the shows it seems that Sin Cara is getting ready for a small push towards bigger things, as he ends up in the main event too! Originally scheduled to be John Cena facing off against world champion The Miz (we do think he is a great performer and that he’ll only improve with time, and that no matter what anybody says Cena deserves his spotlight; because it is rare to find someone who works a crowd in either direction like him). Following the breakdown of the encounter thanks to interference with a steel briefcase from Miz’s protege (and Cara’s opponent earlier in the night) Riley, Cara proceeds to run to the ring backed by his already infamous tribal beats and incite the “anonymous Raw General Manager” to commission a tag-team match (an event that would later be repeated on this week’s edition of Monday Night Raw) which they win, much to the crowd’s delight.

So, all in all, it’s been a fantastic night and we are excited for the next show that we check out! Next stop…SmackDown! The WWE are awesome (see what we did there?) at putting on a show that caters for seasoned fans and does not fail to entertain newcomers to the sport. Nice work. 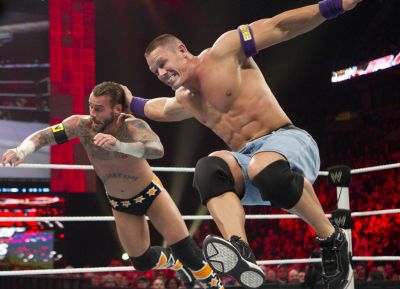