Music Non Stop is an independent organisation at the forefront of alternative electronic music distribution in the UK, Richard Dove and Jo Moy have been at its helm since late 2008. For this industry spotlight, Richard takes us through the highs and lows of running the business and reflects honestly about working within the gothic and industrial markets. 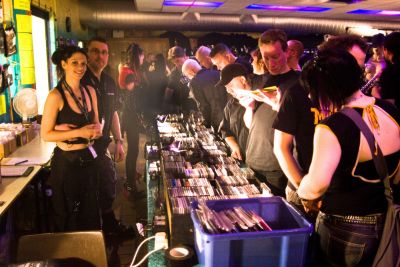 S] How did Music Non Stop get started originally?

Richard] Well Jo and I are of course Music Non Stop version 2, being Grufti Limited and not Music Non Stop Limited. The original owners started as two guys buying up old Kraftwerk releases at record fairs and selling them on. That was about 11-years-ago. We re-launched the website in August 2008 (and at Infest) after the original business went into liquidation following the closure of the website in February 2008.

S] What are some of your biggest challenges on a day-to-day basis?

Richard] Getting out of bed! We work very late seven days a week, normally going to bed between 2-3am, so early starts are not normal for us. It’s a difficult question to answer as different days would see us busy with different tasks, like receiving and processing deliveries to get them out of the door as quickly as possible to customers or adding new products to the database. The daily and weekly tasks required to keep the site and business going are very time consuming, and I also work three days a week elsewhere, so that limits the time I have available. So fitting everything in is the biggest challenge.

S] You are based up north in Leeds – how has this helped you to grow your business?

Richard] Not at all. As we’re online only our location in the UK is pretty irrelevant.  I would add though that being a UK based retailer brings several disadvantages compared to our European competitors. For example, release dates seem to be later and there is much less importance and urgency placed on ensuring we get products on time than our German rivals. The UK is just not seen as important. Additionally, as the vast majority of our product is imported delivery times to us from suppliers are longer than our mainland rivals as well.  We also have the currency conversion issue and weakness of the pound to contend with, all of which really don’t help a UK business compete with Euro-based competitors.

S] You work predominantly within the gothic and industrial music niche – why?

Richard] It’s the music I have loved all my adult life and I was exposed to it and similar genres as a child.  Having said that, ultimately I sell it because I thought I had spotted an opportunity in re-launching Music Non Stop and goth and industrial is and was the music sold by the previous owners.

S] What keeps you inspired to move your business forward?

Richard] Another difficult question. Running the business is extremely time consuming and not that particularly well rewarded financially. Jo and I were both much better off, had a social life, slept properly, and were a great deal less stressed before we re-launched MNS, so I really don’t know what keeps us going. Financially we’re committed to it for now. Despite our best ideas and plans we have no real time to make the developments and improvements to the website we want to make.  We think our website is one of the better ones amongst our rivals, but know that the customer experience can be improved further. Behind the scenes I think we have tightened up on many of the more commercial aspects of the way the business is run by us compared to the previous owners. We’re confident we will not go out of business.

To, finally, answer your question, I think the belief that one day we’ll increase sales to a point where we believe the business has a long term future.

S] How would you advice other people who are starting out with an interest in stocking and promoting alternative music in the north of England specifically?

S] What would you like people to know about MNS that they don’t know already?

Richard] There’s just two of us, Jo and I, and I’m part-time. We get calls and emails from customers in the USA who seem to think we’re some massive corporation. And, also that we work extremely hard, and that 99 per cent of delays are down to our suppliers, not us. Also, we want you all to buy a CD each month from us.

S] What’s the best bit about your job?

Richard] Getting to play with the cats when I want, because we’re home-based. There’s nothing glamorous about running MNS, it’s a lot of hard work. However, we did get a free invite to a European festival last year. That was very kind of the promoters and I had a great time even though Jo couldn’t make it!

S] What has been your defining moment in business thus far?

Richard] I think maybe that we went from agreeing to re-launch the site to being up and running, and having a stall at a festival, in about eight weeks, and on time. It was completely knackering, but we achieved what we always fail to do in my day job which has many more resources thrown at it. It was a huge effort by a small number of people, with a very steep learning curve.

S] Your random question: What song is the soundtrack to a typical day at MNS, and why?

Richard] No idea, I tend to have a quick listen to new releases when I get a chance, so it’s always different.  I don’t think there’s a typical day for me either, but if I have to choose it’s going to be Coreline‘s ‘Overdrive‘ – fast and mental.