In our latest industry spotlight interview, we chat to Chris Sherrington and Chris Tuke, the men behind York’s Fulford Arms, which has become one of the city’s premier live venues. 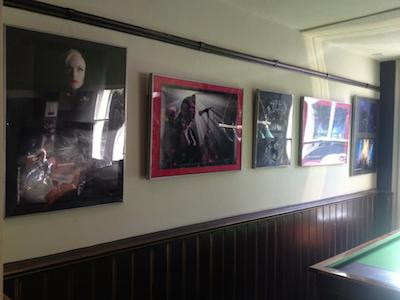 S] Can you tell us how things have developed with the Fulford Arms? What were your aims when you opened up?

CS] “Well, we wanted to support local music venues and get people back into them. We wanted a venue we could take on full-time. We’d done a lot of stuff at the Duchess before, and Stereo, and while there was already live music at the Fulford Arms under the previous manager, we felt we had a good opportunity to develop it further. In the six months since we’ve been here, we’ve had some good names in; TV Smith, Mark Burgess, The Chameleons. We got offered investment to completely refurbish the place and turn it into a pub that also works as a live music venue and can switch between the two.”

S] What are the biggest challenges with running the Fulford Arms?

CT] “The biggest challenge is having a social life, actually (laughs). You have to put everything into [running a venue].”

CS] “But to do something like this, you’ve got to love it. You’ve got to want to have it as your life, but you also need people around you who have the same vision of it. You’ve got to involve everyone in the local music scene and make it clear that you’re not just about making a quick buck; you’re actually in it for the long haul.”

CT] “We’re quite lucky with the team we’ve got, I think. Everyone seems to understand that we’re not just here to make money. We actually like the bands and just the atmosphere of the pub.”

CS] We haven’t had a single show yet where we’ve sat there and thought ‘Oh God, why have we put this on’. Every single show we’ve managed to put on has been something we’ve really enjoyed.”

S] Can you talk a bit about where you guys have come from? What were you involved in before taking on the pub?

CT] “I was a sound engineer in London first. Then I fell back into York after running out of money, ended up pretty much running The Duchess, and then came here. Met Chris in a dark, dingy rock club quite a while ago.”

CS] “I used to put on club nights in York, DJ-ing, putting on the odd band here and there. A few years ago I started working at The Duchess and came up with the idea of DV8Fest [a local music festival in York, formed in 2010]. The idea was to put shows on at music venues around York just to get people supporting local music. The long term plan was always to secure a venue for live music in York, because a lot of venues here have gone under. We do tend to work with people we know, but we always encourage new people to come in. We’ve built quite a nice network. If anybody comes to us with a show, were always happy to look at it and see what we can do.”

S] What do you think to York’s music scene? Any advice for local bands?

CT] “Honestly? There’s a lot of talent and a lot of good ideas, but you’ve got to be careful not to get trapped within your own success in the local scene. That’d be my warning. I think it’s a shame we’re overlooked a lot of the time. For bigger bands, if it comes down to between York and Leeds, Leeds is the preferable place. I’d say, earn your bread and butter in York and then get out, but don’t forget where you came from.”

CS] “York’s often seen as Leeds’s boring cousin, and we do get missed out a lot on tours. But having said that, York has got a really good scene. I think we’re filling quite a niche in the market because at the moment York’s [live music scene is] still suffering from when Stereo went under. The Basement focuses more on comedy and cabaret stuff. We’re giving smaller bands a place to play and then next year they go and tour with other bands. Sometimes we’ll tell bands honestly, ‘you’d be better off playing somewhere other than here’, but we’ll still help draw a crowd to those shows.”

CS] “It’s easy to get too comfortable. You see some bands playing the same shows and you really want them to get out there and push themselves. But then if we can get a big enough noise going, the right people will come to shows here.”

S] Do you have any business tips to share for young people who are wanting to get into venue management or promotion?

CS] “Firstly, respect the artists. A lot of people who put on shows do just look at it from the money side of things, but you’ve got to look at the long term. The band you put on this week might only draw twenty people, but next year they could get a much bigger crowd. Also, remember they’re only human beings and they want a good night out as much as anyone else. Always treat them with respect and put in that extra bit of effort; even if that’s just a simple thing like getting them cigarettes. They’ll remember you. Also, remember your crowd. The only reason we make any money off this at all is that people turn up. So again, talk to them, see what they want.”

CT] “The bands have got to complement each other. You want fans of the main band [on a bill] to enjoy the supports, and vice-versa.”

S] What does the future hold for the Fulford Arms?

CT] “Domination of York, at the very least.”

CS] “We want to keep working with other venues. The idea isn’t that our place is amazing and everywhere else is rubbish. We want to put on shows at other places and keep the support going.”

S] What keeps you guys motivated?

CS] “It’s good that when you’ve had a bad day, you can just come down and talk to people about music. You need to remember that you’re here to provide a service for people.”

CT] “Well, it’s fun, for the most part. It’s either this or being stuck in some call centre somewhere, and I’d rather be surrounded by musicians and good people than stuck in a boring 9-to-5 job.”

S] Finally, what would be your picks for good bands in the city?

CT] “The Franceens are a cracking band to see live. Battle Lines are good. A Jokers Rage have done some wonderful stuff…and Boss Caine, of course.”

CS] “Bull are good. The Blueprints, too.”