In our next industry spotlight, we chat to The White Rooms’ founder, Dan Whiting about building a rehearsal space in York. 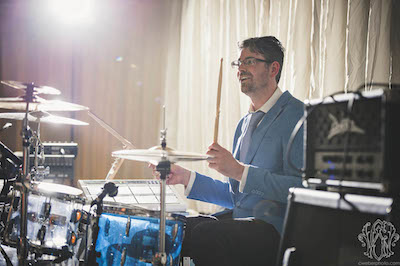 S] Tell me about your musical background?

DW] “I’ve played drums since I was eight. I wasn’t that great but I was lucky because my mum had my back and would tell the neighbours to “piss off” if they complained! I was in my first band when I was at school, we used to practice in each others’ front rooms on little amps and no vocal PA. The first band I gigged with were called Ghia. We were a pop-punk four piece, we had a van and flight cases and everything! Next up came my long association with Alexander King; playing drums in AKP and also Glass. Alex rented a unit on farmland in Haxby and called it the Red Rooms and hired it out to other musicians to rehearse in. That’s kind of the roots for the White Rooms..”

S] How did The White Rooms come to be?

DW] “In 2006 I was playing drums in AKP and using the Red Rooms that Alex had set up. The Red Rooms were essentially unmanned and a few of his customers had pissed off the land owner so he was getting a load of flack about it. After doing a bit of research I figured it was viable to set up a practice space of my own. Too many compromises existed in the rehearsal spaces that were available at the time, mainly parking but the gear wasn’t good in most places and the drum kits a joke! It was my vision to remove all of these compromises and have a great space set up for anyone to use with loads of parking spaces a priority and great equipment that worked properly.

The recording studio came a little later than this and was just a natural progression from offering rehearsal space. Bands wanted demos doing and I had a space to do it in. I’d done live mixing before with bands so learned the basics of studio recording and just dived in. Years later I’ve got a great set up, lots of great microphones, a great mixing desk and a handful of quality outboard gear.”

S] What advice would you give to someone in Yorkshire looking to set up a recording studio and rehearsal space?

DW] “Unless you’ve got deep pockets, I wouldn’t bother! And if you’ve got family, really don’t bother, you’ll never see them again! The industry at this level really doesn’t make any money and you need to be babysitting your bands at all hours of the day. Some days you’ll be in at 10am and won’t finish till after 11pm and you’ve only had 2/3 bands in. That’s not a lot of money once you’ve taken off your business rates and your rent for the day and instead of seeing your friends and family you’ve exchanged nods and “all rights” at people you’ve just had to tell off for misusing your expensive equipment!”

S] What are the core challenges when it comes to maintaining and operating The White Rooms?

DW] “Patience! And a positive outlook, too. You’re dealing with humans with feelings and you should treat people how you like to be treated back. Most people come to the White Rooms for fun, I’ll be honest it’s delightful having so many people, young and old having a good time in my establishment but occasionally something happens that winds you up and you do have to tell people off! Also that thing I mentioned about having no time to yourself, you feel sometimes like everyone wants their pound of flesh. A lot of the time, I’m getting calls and texts at 7am in the morning or 1am at night, and that really winds me up!

S] What key skills do you need to do your job?

DW] “Professionally, understanding your tools, knowing why you’re doing something rather than just being told to do it is key in every aspect of life, not just as a studio operator. Being able to operate a mixing desk is important. Knowing your hardware and software when tracking and mixing too. Also there’s knowing how to repair amplifiers and speakers when necessary. Having a professional mentality to keeping the bogs clean and providing toilet paper and hand wash are just as important as knowing how to equalise a PA system when you’re a one man show like the White Rooms is.”

S] What bands and projects do you have outside of The White Rooms?

DW] “Well there’s Percy, a three-piece post-punk band full of angry old men writing songs about how crap the government is, how frustratingly passive everyone is, bandwagon jumping, relationships, fat men and scousers. We’re a bit like The Fall, and Half Man Half Biscuit. It’s fun. I play kazoo, too on a couple of tracks.

I’ve got a new thing just started with Leo Derevonko of Dorien Starre which is going to be very popular I think. It’s a bit electro and a bit Royal Blood. Leo has been my best mate since the AKP days and we have a great time drinking beer, playing football and rocking out these awesome tunes! We’ve no name yet but 4/5 really strong songs. Watch out!

I also have my wedding band The Cover Lovers: Slick, professional and expensive! It’s a great group of musicians, and we play loads of pop and rock tunes from 5ive, Katy Perry, Ricky Martin, Jermain Stewart, Beyonce and more, plus a few standard classics like Led Zeppelin, Guns ‘n’ Roses, Queen, Elvis and Bon Jovi.”

S] Now you are with Percy, how do you look back on the successes of acts like Glass and AKP?

DW] “I rate AKP and Glass very highly and think we could have gone all the way with the right manager. I still listen to the albums and EPs, and now with a real fondness and a massive respect for Alexander’s songwriting talent. There’s a Glass song that never got recorded, ‘Cold War Resorts’, it’s really dark and sinister. One day I’ll coax Alex into finishing it with me, then you’ll all be scared.”

S] What has been a career highlight for you – one or two – musical or otherwise?

DW] “Recently, Percy were the first band to play at the new Fibbers at Toft Green. We supported the Fall. Tim Hornsby loved it! It was an honour to be asked.

Also I suppose the success – at least musically – of Galtres Festival every year makes me proud. I don’t have a lot to do with organisation or setup but I am on the panel of judges who go through every single application to play at the festival and have a say in who headlines each year. There’s five of us and we argue about who’s better than who and then everybody backs down and I win!”

S] What do you think of the music scene in York?

DW] “I love York’s music scene. I think especially with New Fibbers opening up on Toft Green we’ve finally got a venue we can be proud of that will attract really good touring bands and be a basis for lots of excellent local music shows. York folks are apathetic about watching local bands. If there’s some good touring rock bands playing though with local support, York will get a good reputation and people will get sucked in to it. Fingers crossed.”

S] How does a band become successful if they are based out of York?

S] Give me your top three innovative/different acts in the city?

DW] “RSJ. Dirty riffs with filthy distortion and genuine power. Their ability to flip between soundscapey sustained chords, jarring polyrhythmic stabs and all out speed metal while climbing the light rig and playing in the audience is staggering. Interspersed with ridiculous humorous twists and samples off McDonalds ads! Also, probably the nicest bunch of lads you’ll ever meet in a single band!”

Also, check out Civil Protection who are based around Yorkshire. They’re a post-rock-predominantly-instrumental band who will roll you over at gigs with enormous building riffs and incredible dynamics.

Lastly, they’re off the radar a little at the moment, and going through a slight change of style – and maybe even a name change – but Elliot and Elle Nelson from Honeytone Cody have always impressed me with their invention and style. Keep an eye on their movements because they’ll be back with something amazing, I’m sure.”

S] What about outside of music? What sort of stuff inspires and motivates you – people, places, movies and why?

DW] “I do nothing outside of music! I like beer, football and curry. I like odd motor sports too, like drag racing and tractor pulling, anything that’s noisy! I’m not really a movies person though I do watch quite a few. Oh, I like fancy dress parties!!”

S] What are your main aims and goals for the future as a musician and for The White Rooms?

DW] “As a musician I’m impressed with the new band with Leo and everyone seems to like it. It’s got great radio potential. Percy, too have been on BBC 6 Music a few times and even a stateside surf rock radio station! The Cover Lovers are getting loads of great gigs too. White Rooms is doing well, I’ve had some excellent recording sessions booked in and I’ve got some very busy nights ahead with fully booked rehearsal studios. I’ve taken on an employee, with guaranteed hours which I thought I’d never be able to do properly so all is looking good for the future.”