In our latest industry spotlight, Kerrang! Radio presenter and dedicated rock journo Katie P (Katie Parsons), shares her thoughts on getting into the industry, her career and… err, fighting zombies. 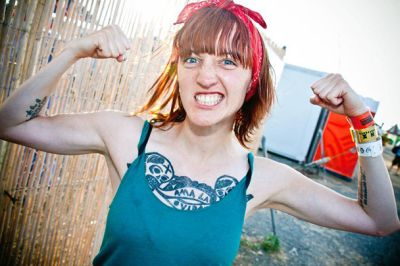 S] Tell us about a typical day in your life?

KP] “The Kerrang! office starts at about 9.45am each morning, so I grab a coffee and go through my e-mails, replying to American-based people that have got in touch through the night. I open my post and put some new music on the stereo to check out what’s arrived. I might do a phone interview with a band for the Introducings – and another for the news section. Then, I’ll schedule in more interviews and photoshoots, update the Kerrang! website, go through letters that have arrived to the magazine and prepare ideas for the Kerrang! radio show.”

S] What’s your favourite Northern city to work in, and go to see gigs?

KP] “I am a Londoner, but the Kerrang! Tour has taken me to loads of different cities. I love hanging out in Leeds in particular. There are loads of great venues, cool places to hang out and I have loads of mates up there.”

S] What’s been your biggest challenge as a journalist?

KP] “I am constantly looking out for the ‘next big thing’, and not wanting to miss out on someone great who may be just around the corner.”

S] And your biggest high-point?

KP] “That’s being able to say you had a hand in making a band popular and telling people about them.”

S] What’s the best advice you can give to young journalists?

KP] “Write as much as possible, read as many different publications as possible and listen to as much different music as possible. All at the same time.”

S] Talk to us about how you got your “break”?

KP] “I did a design internship at Metal Hammer after I graduated and was quickly asked to join in with the editorial written side of projects too. About six months later, I was offered a full-time job as staff writer and editorial assistant. Kerrang! then came to me and offered me a job in early 2007.”

S] Who’s your favourite band of the moment?

KP] “This changes every day depending on my mood. I love the heavy technicality of Heart Of A Coward, love the intensity of My Preserver, love the melodies of Verses. There’s so much to choose from!”

S] And your favourite new band from up North?

KP] “I really love the latest single (‘New Year Or New York’) from Yashin [Scotland]. They have been playing around the outskirts of mainstream acknowledgement for a few years, but I think this single could really send them places.”

S] What are the major differences in working for organisations like NME and Kerrang! – is it difficult to adapt to different “house styles” of broadcasting and writing?

KP] “The main differences between those two is the actual subject matter. There are very few bands that exist in both our worlds. All rock magazines have different house styles – so if you are ever submitting work to them as examples of your own writing, best to make sure it fits in with the style of that publication.”

S] Did working on the Trident Perpetual Festival Guide push you in different ways to your other work – if so, how?

KP] “Up until that job, I had only really worked as part of team – running my own sections – but being surrounded by a full office of people to bounce ideas off. The Trident job had me working totally alone for eight months – self-motivating and coming up with new ways to write about music, travel, food and festivals – so that really helped me when I came back.”

S] We work with a lot of writers based up North in cities like Hull, York and Leeds – do they need to move to London to succeed in journalism?

KP] “Not at all. The majority of magazines are nationwide publications and they need writers to be their eyes and ears in different areas and scenes around the country. Being able to specialise in a certain city’s tastes and likes – as well as get to the venues and shows that other people can’t, is really important.”

S] What keeps you passionate about broadcasting and journalism in general when you are having a really bad day?

KP] “Hearing a really fantastic song. You can have had the shi**est day – technology breaking, people being rude, things failing – and then you hear an amazing track and you remember how much you love this sort of music.”

S] What are your thoughts on the new Bauer-endorsed reality TV show ‘The Exclusives’ coming to ITV2?

KP] “It’s interesting. The rookies came and spent a week working at Kerrang! – trying to learn about what we do, and how Kerrang! differs from other magazines. All the people were really nice – and genuinely wanted to work in journalism. It’s certainly not the traditional way to get a job – but I think it must have been a fun thing to take part in. The Kerrang! episode airs in a few weeks!”

S] There’s obviously a drought in jobs at the moment in journalism – so, if people want to get to where you are (eventually), what would your advice be – is a degree relevant anymore, for example?

KP] “I certainly wouldn’t discount someone if they didn’t have a degree – or if their degree was in an unrelated subject – as I think so much of this job is about personality and having a drive to do and learn as much as you can. My advice would be to try and do work experience or an internship at a magazine to see what it’s really like working there, and get some great contacts and experience.”

S] What ingredients does a good rock journalist need to have in order to succeed?

KP] “You need a passion for music, knowledge and opinion of music. You need to be personable, hard-working, persistent, and be able to run on little sleep.”

S] Random question now, in the event of a zombie outbreak what weapon, and band, would you use to help defend yourself and why?

KP] “Weapon? Probably a shotgun. I used to play a lot of ‘Halo’ with my mates when it first came out, and that was always my weapon of choice. It means you don’t actually have to be involved with person-on-zombie blood combat too. As for the band that would help me? I reckon Slipknot – there are pretty active and fit and there’s loads of them!”