God Bless Americana! Despite his wild wild west country accent, framed by an ersatz ‘dust bowl barn’ stage set, Ags Connelly channelled the spirit of a lovelorn cowboy, warming the audience with authentic ballads on a southern breeze. He would surely be more at home crooning from the corner of a smoky saloon, Stetson at a rakish angle, supping on a bottle of sarsaparilla. 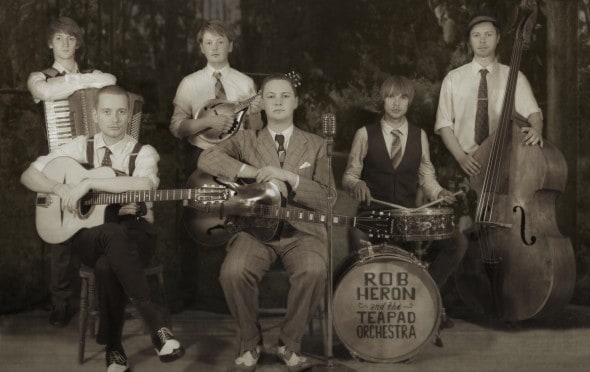 His uncensored musings of heartache washed over the audience in sine waves of Gmajors and Eminors. Although a reliably enjoyable performance, the narrow repertoire of themes and formulaic chord progression left the audience slightly high and dry. Stirred into sorrowful silence by rehashings of ‘Always on my mind’, recounting missed chances, and the pangs of lost love, it was a relief to hear the upbeat sway of ‘When country was proud’. However, the referencing of country greats within a country song proved an unavoidable reminder of Kid Rock’s ‘All Summer Long’.

Ag’s intervening dialogue revealed a self-deprecating champion of country music, a traditionalist, embittered by modern commercialism. If he hadn’t been so jovial, his ranting could have branded him a spectre of the Nashville feast. Next on the horizon, Red Sky July. Reliving a teenage dream born in the 60’s, this triple edged trifecta of Glaswegian ex-rocker (of ‘Texas’ fame), flanked by ageless flower child and mature southern belle are an unexpected line up for a country band. Shelly’s ethereal siren song flows in flawless harmony with Charity’s alto drawl.

With ill-concealed glee Shelly shook her little egg shaker and twisted on the spot like Karen carpenter, whilst ex-model Charity broodingly played her fiddle, melding into Shelly’s nightingale trill. This would perhaps have been a bit nauseatingly twee had it not been for Ally’s reverberating guitar solos which galvanised the breathy vocals and Celitc strings with Shadows-esque steeliness. ‘Renegade’ was undoubtedly the centrepiece of their set. Haunting and echoic, this ballad was arrestingly beautiful and performed with undulating verve. For marketing reasons their record label had commissioned more upbeat songs, though their strong suit, and heart, clearly lies in the ballad. With a clickety clack, next on down the track came Rob Heron and his Teapad orchestra. In his Baden Powell hat and park ranger get-up Heron leads his eccentric band through an array of soulful country ballads, good old fashioned rock n roll, rockabilly and swinging jazz. The troupe played with frenetic energy; the multifarious machine sounded greater than the sum of its parts.

Heron’s voice is malleable and sonorous, capable of yodelling to high standard, whilst in the same breath, drawling down into the bass notes with Cash-like eloquence. The strong, silent double-bassist worked in concert with the maven drummer, keeping time through percussion on güiro, washboard or conventional drums. Scintillating mandolin brought a gypsy folk tinkle or renaissance melancholy to the eclectic set list, whilst Spanish guitar and Parisian accordion captured the sound of continental café jazz. Resonator guitar and harmonica set a Western scene – with ‘Small town blues’ the soundtrack to a cowboy trailblazing out of his one horse town. Particularly memorable, ‘Things have Gone to pieces’ was a mesmerising memorial to the great George Jones. Heron toyed with the crowd, recounting the comedic tragedies that befall the jilted lover, tongue firmly in cheek, yet singing the chorus with heart-breaking pathos. Picking up the pace with ‘Pick Old Robin Clean’ the Teapad Orchestra demonstrated their versatility by stirring the seated crowd to dance in the aisles, evoking the spirit of Mardi Gras. Hard to believe there was only one genuine American amongst the Smörgåsbord of country talent on show that night; oh boy, what a night!