Martin Atkins is a force of nature, man – he’s a lecturer – he’s the Program Chair for the Music Business course at SAE Institute, an entrepreneur, author and a musician (he’s played with the likes of Pigface and Public Image Limited), and he’s an all-round great dude, someone with real heart and passion for music, but also business and creativity. While in Chicago doing some work with super-cool disruptive furniture brand, Muzo, we had the opportunity to catch up with Martin and discuss his career, inspirations and plans for the forthcoming Pigface 25 show, perfect working spaces and more of that sort of fucking stuff. 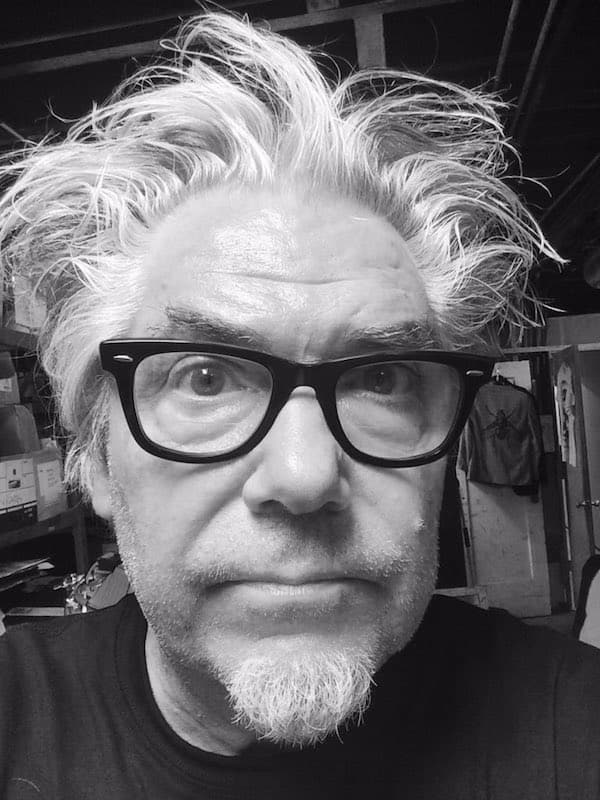 The thing that I’ve been enjoying for a while is that there isn’t a typical day, in a couple of weeks I’m going to Halifax, Nova Scotia [Canada] to speak to work on a new keynote titled, Art Is A Knife, Lick It. After that, I’ll be slowly continuing to work on my Masters, which I’m actually doing at Middlesex University online. I’m also working on scenery for the upcoming Pigface show too, everything has to be fire-code certified! Over the weekend, I was at the CD Baby conference talking a little bit and meeting people. I’m also teaching, which I love, and I’m developing curriculum.

It’s the last thing I’m mentioning, but I’m playing my drums again. I haven’t really played drums in ten years, and we haven’t done a Pigface show in 13 years. Because I’m playing my drums, I’m working out – I’ve just dropped 16 pounds, and I want to drop more. I’ve got 50 days to go until the show! Currently, I’m working with a trainer and I’m trying to eat smart, because I feel like my brain and arms can do what I need to throw myself around, it’s much more of a challenge. One of the things that keeps me going is that I was very fortunate – I started a label, got a studio and started writing and teaching, if I was still just ‘the drummer’, I think I’d be really sad. I mean, I’m proud of what I’ve done but that stuff was 35 years ago. I think that one of the things people like about my drumming, is that I don’t do it when I don’t want to, because it’s not my 9-5.

What was it like making the jump from musician to lecturer?

It wasn’t a jump, it was an accident! I had an office down on Wabash which was round the back of Reggie’s Rock Club here in Chicago – we had an office round the back of there. It was a bad neighborhood at the time! I built a rehearsal space for Killing Joke there because I was tired of flying to London and rehearsing with them, then getting on the tube and all that, so I built this room, which became my studio.

I thought to myself, ‘I need to go down to Columbia College and get myself some interns, or apprentices. At the time, I had the label and we were putting together these package tours with Pigface as well as a three other bands. We had five bands on two buses! It was a great time for the label, and for the bands. I was like, surely I could get some students to do envelopes and packing? So I went into Columbia College and they told me to give them a presentation on package tours, and building a street team so that the students can find out what you’re doing. They liked what I did, and they said, ‘When can you start?’, and I said, ‘I can take students back to work with me right now!’, they said, ‘No, when can you start!? You should teach this stuff!’

What’s a big mistake that your students make?

It’s not fully understanding that the myth they have grown up to believe [regarding musical stardom], is just that, a myth, and that there’s a decade-long timeline between what they’ve absorbed, and what they’re trying to accomplish. There are these aspirations that people have, like being on the cover of Melody Maker, that have nothing to do with their growth as a person, as a human being, or with regards to success in the music business; people lose sight of their own goals. I think the other mistake is not believing that they can do stuff, make a difference and accomplish anything they want. If I’ve had doubts about students, I’ve always been proved wrong. I think if you don’t believe in yourself, you can become reliant on other people, and it can become very toxic.

How do you look back at the success you had with bands like PIL and Ministry at this point in your career?

It’s weird. I worked to be in PIL, I moved to London, and I found out they were looking for a drummer, two years after I missed their first audition. I’d listened to all of the songs, and I was just ready to do it! On the one hand I want to say you make your own luck, if you work hard, but it still doesn’t stop me feeling lucky that I did PIL, that I did Killing Joke and worked with Ministry and Nine Inch Nails! It was an interesting time. Those creative experiences, fuel who I am now.

How do you feel about performing with Pigface for the forthcoming 25 show?

It’s going to be a challenge! There’s now five drum-kits, three bass players, a cello, sitar and fiddle. It’s a challenge for the sound guy, and everyone. All of us are like, it’s going to be an insane challenge, but we’ve done it before, and we can do it again, it’s an empowerment thing.

How have things changed over time for Pigface, in terms of how it’s pulled together?

I think the thing that’s dawning on me at the moment is that, the last time I did Pigface, the label was up-and-running and I had an office that was fully functional, and that’s what I was doing. Now,  I am a Department Chair, and I’m working out two hours a day, I don’t have any time! There have been a few people helping me out, but it’s a real challenge – I’ve got to sort transportation to and from the airport for like 15 people [for the show] – just stuff! With so many moving parts, the challenge for me is to actually sit down and experience it all, rather than driving it. It’s going to be interesting!

What’s the process in getting all the Pigface musicians together?

With Pigface, the right people choose themselves! There’s a moment for me of like, ‘Oh fuck! I’m doing it now, who’s it gonna be?’ There’s Charles Levi, the bass player [My Life With The Thrill Kill Kult] – he was in hospital when we first put this together! I was worried, but then he came to the first rehearsal and blossomed! Also Greta Brinkman from Moby is coming over in Berlin. We’ve also got Martin King from Test Dept who’s on a plane at the first opportunity! Some people just choose themselves. We’ve also got Frankie Nardiello [MLWTTKK], and also Mary Byker from Gaye Bikers On Acid is over in Brazil now – for fuck’s sake, he couldn’t be in Detroit could he?! I was like, I want cello in it too [Leyla Royale is now the cellist for Pigface], and I remember there was this girl who worked on a podcast who came to do some work for the school, called Gaelynn Lea, and she plays cello. In the middle of rehearsal I discover that Gaelynn also plays the fiddle, and I thought that would be pretty fucking awesome! Then we’ve also got Bob Dog [San Antonio Slayer] on the sitar! Pigface has always been ‘Hey, we’re gonna have six people playing bagpipes, a guy with a shopping cart’. This show isn’t just going to be a greatest hits show, but there’s going to be experimentation.

What are your plans post Pigface 25, musically and otherwise?

Even when I wasn’t drumming, I went to China and I made a record called China Dub Soundsystem, which was a Pigface album really, but with some traditional Chinese music in there. I met a guy called Li Qing from a band called Snapline – I’d love to do a record with him, but I don’t know if that’s realistic from a time standpoint for me.

I’ve also realised that I still am a drummer, and I want to play my drums. This Pigface gig has saved my life, and made me want to explore more. I’ll be up and running back to my fighting weight as a drummer, about 30 pounds lighter! So, I’m excited about that.

What gets you the fuck out of bed in the morning?

One thing for me was that I was holding off booking the Pigface show until I was fit, and that just didn’t work, so I just went ahead and booked it, and so I had to fucking do it then, that motivational freak-out was pretty good. I mean, sometimes all you can do is the dishes. There have been times when I’ve been sat in the room and been really down and told myself, ‘At least I can do the fucking dishes.’ Then, at least I’m moving around and doing stuff.

I don’t have a set answer to that, I think that it’s important to do what you love. You have to do more of what you want in life, and whatever inspires you can be a great motivator. I think that if you do things just for financial gain, then you’re going to hit problems. If you are having trouble getting out of bed, then you need to have a look at everything around you, and ask, ‘Why am I having trouble getting out of bed? Think about what you could do to change the situation, to excite yourself. I mean fucking hell, man. It’s an amazing world!

One of the things that’s been great about Pigface, is that we don’t over-rehearse, and it’s always last minute! We just decide, ‘Oh, this person plays an instrument that we’ve never heard of before, come on in [to Pigface]’. We are always surprising ourselves and conquering fear, and staying interested.

Talk to us about your perfect working space?

It’s a fucking catastrophe! I put post-it notes on my laptop! There’s a post-it program on the latpop, but I can’t see it! I need to be able to see things. If one environment is cluttered, I might need to move to a clean desk just to focus on a specific thing. Maybe once I’ve been over there, I’ll be able to tidy my other space! I like Muzo’s products because these tables and chairs are all on wheels which is great. You can spend a lot of time when you get into a new space thinking about where everything’s going to be, and you can paralyze yourself with all of these decisions for the next five years, but this [Muzo] stuff you can change as you like, which is a good deal!

Thanks to Darren Buttle of Muzo for setting this up. Pigface play the House of Blues in Chicago on November 25.