Car crashes, song-writing, song-singing, and scaring small children, it can only be a spotlight with Derbyshire’s favourite unsigned singer-songwriter Rob Pilmore. Just a few short weeks before the young troubadour plays his first York gig, we sat down for a chat to discuss his life, loves, inspirations, and the horrific smash that nearly cut his promising musical career short. First things first, as is usually the case (barring rogue timelords), we wanted to know just what the affable gent was up to at the moment? 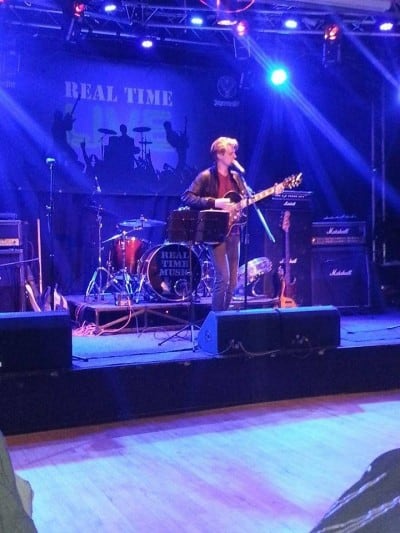 “Well, I’m always busy writing new songs,” he begins with a charismatic flash of a smile. “There’s always one in the pipeline. Very soon I’ll be in the studio recording a set of songs that will hopefully become my first album, and then I’m off gigging for the rest of the year. I should be putting in a performance at some of the local festivals. The aim is to get my music heard and widen my fanbase. Festivals are a good way to steal people’s ears for a while and make them listen.  There’s a great new radio station starting up in Sheffield which is focused purely on playing unsigned artists for free. It’s called Our City Radio and an old university friend is working there.  Once the recordings are done I’ll be sending a few over to them.”

It’s good to hear Rob sounding so positive. In May last year a reckless driver nearly put a car-shaped spanner in the works of his career, by speeding into the oncoming lane seriously injuring Rob and three of his friends. While all suffered injuries, Rob’s were particularly worrying, especially considering his status as a musician and performer. We asked if he could throw some headlights on the situation.

“Yeah that was an interesting time,” he says openly. “The whole crash is still a big void, but I remember sitting by some trees and looking at this piece of meat that I was sure used to be a finger.  It was flapping around and oozing a thick red substance onto my converse.  I remember thinking ‘Sh*t. That looks a bit f****d up’.  Then there was a doctor that looked like Jeremy Bret and they patched me up.  There’s been months of wires inserted and removed, learning to write and play again and just getting back to normal.  I can’t quite make a fist yet but there’s another operation coming up as we speak, possibly followed by a shiny new, hopefully bionic (I can dream), knuckle. That will see me out of action for a few weeks but hopefully not too long. There’s a lesson in all this somewhere – oh yes – car crashes are bad for your health, kids.”

The crash, which occurred on the aptly-named Skull & Crossbones Bridge, resulted in both cars being written off due to the impact, in addition to Rob nearly losing the use of his hand, so we were keen to know if the experience had made Rob reconsider the importance of being able to perform.

He replies thoughtfully:  “Definitely.  I don’t see how you can come out of something like that without a fresh perspective.  It probably all sounds clichéd, but it’s given me a new zeal for life. Before “the crash” as it’s come to be known, I was sort of waiting for stuff to happen.  You think ‘I’m only 25, there’s plenty of time…’ but now I realise you have to make your life what you want it to be.  I’m involved in so many things now it’s almost unreal.  I’m currently leading theatrical ghost walks around Chesterfield, which is a great deal of fun, and I’ve recently branched out into creating murder mystery evenings for my favourite local pub [The Market Pub Chesterfield btw- Ed].  The first one was in March, and I’m looking forward to spoofing some of my favourite TV detectives.  I live on ITV3 crime drama repeats like Morse and Poirot so this is really a marriage made in heaven for me.  None of these things would have happened without me going out and making them happen, so I am a true believer in making your own luck these days.  And why stop there?  What other crazy money-making performer things can I come up with?  Here’s looking to the rest of 2014…”

It’s clear that the tunesmith has energy to burn this year.  So we pushed him to tell us where his passion for performing came from. Candid as ever, Rob says: “I’d like to say that I remember playing an ugly sister in the school panto and it starting there, but if you asked my mum very nicely she would very quickly whip into the cupboard and pull out the family videos.  Me and my brother spent most of our formative years making our own movies.  You could have a field day with those tapes. None of my family are performers, so there’s no history there to spark my passion. It’s just always been with me.”

So, our new favourite string-plucker may not need any encouragement to perform, but just what is it that inspires him to write? “It’s a toughie,” he begins tentatively.  “I don’t have any grand scheme when it comes to writing songs.  Most of my work is a collection of various ideas gathered together. Sometimes they make sense and sometimes not.  I like the idea of an artist being a vehicle for more art, and the notion that there isn’t one strong meaning to all people. It can mean something different to everyone.” He pauses and laughs, “Ambiguous art. I might have strayed from the question a little. Blame the codeine. The main point is that I like to write in a way that is different to other things I hear. I think my songs can be very revealing in an obscure, mysterious way.  We’re back here again – ambiguous art.” 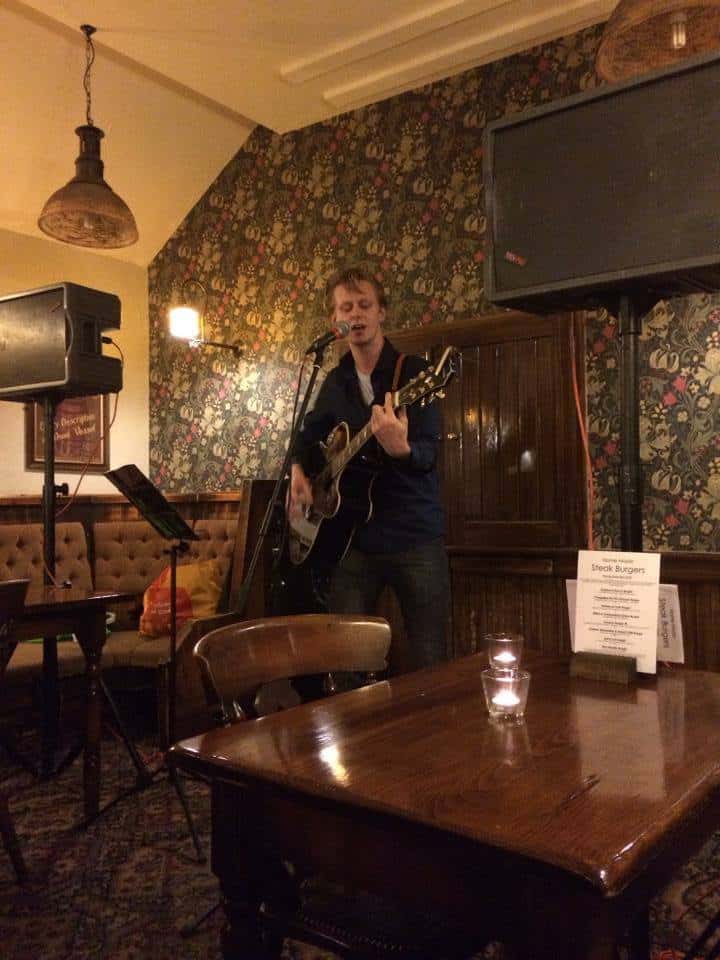 As fans of the likes of Dillinger Escape Plan and Deftones, we don’t mind our art obscure of course but we thought it best to maybe see if we could smear a little clarity in the fog here.  So we asked: what can people expect from a Rob Pilmore show?

Battered paw and all, Rob replies confidently: “I suppose you can expect copious amounts of me, but that doesn’t really help people who don’t know me does it? I’ll try and stick it in a nutshell.”  Unfortunately, at this point I misunderstood and offered Mr Pilmore a walnut shell and things got weird.  Luckily Rob got us back on track: “You can expect some catchy tunes, a lot of energy, a few swears and a good laugh.  I try to embody that good old fashioned rock and roll sort of vibe but channeled through the acoustic guitar. Above all, people should expect a good time. That’s what it’s all about isn’t it?”

As we all know, I actually firmly believe that life is all about scotch eggs and pints of stout, but we let that slide and pushed forward undaunted by querying which songwriters Chez Vegas’ finest looked up to the most.

“For songwriting,” he begins. “I like to split it into two sections really.  Lou Reed is a lyrical master in my opinion and I take a lot of inspiration from him when I’m writing.  He can write a catchy three chord hook too, and I like that simplicity set against his rich lyrics. David Bowie is a massive influence on me for the whole package of interesting lyrics and good songwriting.  He manages to package up quite weighty subjects into a catchy, well-crafted song. He almost tarts them up to the point that people miss the deeper meaning.  That is definitely something I aspire to as a songwriter. That layered approach to the whole process and the idea that songs have hidden depths. The trick for me personally is not to try to copy these influences.  I am very good at mimicking these songwriters and I have to be careful not to enter into the realm of pastiche. One songwriter that usually makes my list is Adam Green. If you haven’t listened to his stuff you should definitely check it out.  He manages to embody that sort of Lou Reed approach to modern songwriting.”

It’s an eclectic mix that will make sense to anyone who has had the pleasure of seeing Rob perform.  So with the big influences out of the way it seemed only right we found out what was currently tickling his earballs. “Obviously I’ve spent a lot of last year enjoying the latest Bowie outing ‘The Next Day’, but recently I’ve been listening to The Arctic Monkeys and Arcade Fire.  A bit of Tom Petty too for a guilty pleasure.”

And with that we bade farewell to the ghost walk leading, guitar slinging, finger breaking (almost losing), song-singing, Bowie-lovin’, interview-giving, troubadour from the land of the wonky spire, wishing him a much less painful 2014.

It’s looking good so far, and you can catch him playing his first York gig at The Basement Bar in support of Richard Tyrone Jones on May 8.  For more information and videos of the man in action check out the Rob Pilmore Music Facebook Page here: https://www.facebook.com/Robpilmoremusic