Recreating what was a turbulent experience for the original artists, Canadian band The Musical Box are bringing their version of Genesis’ ‘The Lamb Lies Down On Broadway’ stage show to the UK in March 2012. We hear about the challenges and the responses the show provides from the group’s bassist, Sébastien Lamothe. 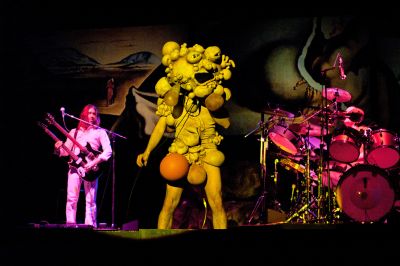 S] How are you feeling today?

SL] “We’ve just finished the first leg of the tour in America. We performed until last Saturday, so it’s good to be home taking a break after 30 concerts and getting some rest before the European part.”

S] Where did the idea to stage ‘The Lamb Lies Down On Broadway’ come from?

SL] “The Musical Box mission has been to re-enact and reproduce, in exact historical detail, early Genesis concerts. I guess in some ways we’ve been glorifying their early works. We have worked on several of their albums from the 1970s: ‘Selling England By The Pound’, ‘Foxtrot’ and ‘Nursery Crimes’.

Eventually, it made sense for us to work on ‘The Lamb…’; the last collaborative work between Peter Gabriel and Genesis. We like to look at ourselves as Genesis historians. It was inevitable, and part of the whole project.”

S] The show has been officially licensed by Peter Gabriel and the other members of Genesis. How does it feel to receive their endorsement?

SL] “We could never imagine being able to re-enact such a performance without their help; they’ve been so supportive. We’re all about making the experience as real as possible in terms of history. Without their support, there’s so many facts and details of the we simply would not nail. Genesis had a strong slide projection system with images supporting the whole concept story during the concert. We had access to the original slides; without this, it would really make the experience less accurate.

Genesis never officially filmed the show; it’s a mysterious piece of work. People were witnessing a dark and strange concept show; they had no idea what they were listening to, they were not familiar with it. This show was really misunderstood in so many ways, so we’re happy to bring it back on stage so people can really see it for what it was.

Another way they helped us; we went to the studio and listened to the master tracks of the original recording. Now, we can proudly say that we are not trying to guess what was played on the album. We know the recipe, we know the textures. All these little details bring the experience closer to reality, and that’s really what we are interested in. It was already an honour and privilege to be able to meet the guys and for the guys to perform on the stage. In the end, it served our purpose; to glorify and recreate the details, in a respectful way, how Genesis did it in the early 1970s.”

S] Was the process of gaining the approval of Genesis and Peter Gabriel easy?

SL] “It’s not something that’s been done overnight; it’s mutual respect that grew. I guess they understood that we’re not trying to get close to them, but to their artistry. We requested and asked a lot of them about something they’ve moved on from, so to be able to accept us and support us in the many ways they did shows that they must feel very comfortable in what we do.”

S] Do you still find yourself learning about your craft as a musician?

SL] “The progressive movement in the early 1970s, this was performance music. Since we’re putting ourselves in the same position, using original instruments and equipment – forty years ago, these systems were brand new; now they are vintage, they’re sometimes problems. It makes the experience very real, but the performance very risky. Sometimes there are mess-ups; one instrument will start breaking, one image may not display right – when this stuff happens, we’re smiling, because we know that’s just part of the experience.

Every single night is a repeated challenge – not just the musicians, all the people executing the special effects, the lights and the sound. It’s the co-ordination of ten to twelve people working together for one perfect performance. It’s always difficult; there’s nothing easy about the format. Generally, our successful ratio is a bit higher than Genesis; with technology, we can pull a few tricks out of the hat which makes things easier.”

S] How has the show been received by those who’ve seen it so far?

SL] “Very strong; people expect certain things, but there also huge Genesis fans and they are touched by the experience. People feel so privileged we’ve put in the effort to relive the past, or thankful this is their ticket to see something they wish they would have seen. I guess that’s what’s keeping us going.”

S] As a performer, how important is it to you to hear what the audience thinks of the show?

SL] “We exist because of the audience and their interest in our passion. The fact they are acknowledging and appreciating all our efforts, it’s a binding experience as we know that’s what they are coming to see and get. It also forces us to keep it up.

I always joke our performances are like a hockey team; some are better, some are disappointing – we feel the responsibility of what we did, and we know people are expecting a high level of quality and we have to deliver. This is our mentality, it’s about trying to put out the best performance in every possible aspect of the show, keep the audience coming in and being happy and touched by the whole concept.”

S] How does your connection with the other members of The Musical Box develop through each performance? What’s the group dynamic like?

SL] “We are a family. We’re all together for long periods of time away from home, and everybody’s mind is dedicated to one thing: to bring the original performances on stage as best we can. It’s a group effort, and with such intensity, the interpersonal aspect is a part of it. There has to be some kind of connectivity between what we do.

Some people are opinionated and have strong personalities, sometimes there are tensions and clashes; but there are very bonding experiences when our art turns into something very rich and positive. Like a lot of performers will tell you, this is a form of energy which is pure and rare, and there’s not much to compare to that form of energy.”

S] Did you find a common bond with Genesis when they supported you?

SL] “We are, in some ways, showing respect for what they do; we are still forcing them to relive some of their past moments, when they were much younger. Sometimes, we are confronting them with moments of their past which are not necessarily their happiest moments.

There was a lot of tension, so for the guys to come and support us – forgetting the negative aspects of what they lived through and hang on to their result – is for us, very touching; they have to go past their resentment or tensions between the individuals and concentrate on their artistry. To be able to reconnect through us is a great mark of appreciation. We are really happy about that.”

S] Do you anticipate a different response to the show from European audiences to how it’s been perceived by North Americans? And is this the first time The Musical Box has performed in Europe?

SL] “The American audience has not been subjected to early Genesis material as much as Europe, it’s like something they’re discovering a bit later. Americans are a bit more expressive generally, a very loud crowd. In Europe, people are a bit less expressive, but you can tell they are being very vigilant and educated about what we do, they are listening. You can tell when the audience is a bit calmer and trying to understand what’s being presented, you know they are paying attention – almost studying every move.”

S] Why do you think the ‘The Lamb Lies Down On Broadway’ album is held in high regard by music fans and critics?

SL] “We can try to break it down and make these crazy analyses about it, but deep down for me, when we are taking about a complete body of work, it’s my favourite album by Genesis. I think, even if they changed the format, all the songs are extremely strong, and the connectivity to one and another in the story is pure genius. I think at the time, the guys in the band were on a huge wave of creativity and very much at the top of their game.

Individually, they put a lot of effort into trying to be a bit more experimental, and Genesis were definitely into anything that was new. Even symbolically, ‘The Waiting Room’ is a reference to them being one of the first rock bands to create an electro-acoustic ambiance. The music is beautiful. Every time I listen to it, as I know everything that’s gone into it from the band’s perspective, I’m overwhelmed with the quality and the genius of every little input that was brought by the band members.”

S] When your European tour finishes, what’s next for the show and for The Musical Box?

SL] “We acquired a grant right licence to be able to perform the show, and we’re the only band who has got such a licence, so obviously we’re going to concentrate on making use of that. We started the tour two months ago, so the near future for us is to perform ‘The Lamb Lies On Broadway’. Europe is coming, but we’re coming back to America, and we’re looking into the possibility of playing other places as well – Eastern Europe, maybe Asia and South America. This is going to be a long tour; a year-and-a-half or two years.”

S] Do you have a message for people in the UK coming to see ‘The Lamb Lies On Broadway’?

SL] “For us, the UK is almost like the Mecca – this is where Genesis came from. For us, it’s an immense privilege for us to play there; it’s like going back to the forest. We’re playing in Bristol, which is so close to Peter Gabriel’s environment – it’s going to be a great pleasure.”

More information on The Musical Box and their adaptation of ‘The Lamb Lies Down On Broadway’ is available on the group’s website.