No musical movement in metal is the butt of as many jokes as nu metal. Baggy Adidas tracksuits, red caps, and ludicrous 90s accessories abound, there’s a lot about nu metal that’s dated, and approaching two decades after the peak of its world domination plenty would have you believe the music is that too. The genre had its fair share of stunning highs though, and we’ve put together a list of ten bands from the days of nu metal who were not only good but whose music still stands up today. 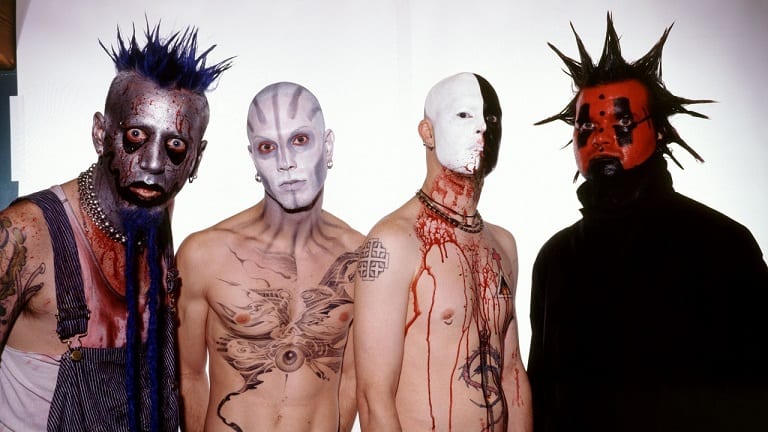 The most obvious choice on this list, and quite simply the essential starting point with anything to do with nu metal. When Korn burst onto the scene, there was nothing even approaching them, and it’s sometimes easy to forget that when their self-titled debut was released laying out the blueprint for what would follow nu metal was not a laughing stock but a genuinely exciting and creative new force in heavy music. That record remains tremendously affecting, a nihilistic and brooding slab of brutal grooves and genuinely unsettling trauma being unapologetically laid on the table. When suddenly the eyes of the world were upon them and a million copycats were downtuning their guitars, Korn managed to stay on top and churn out some of the definitive anthems of the 90s in the likes of Freak on a Leash and Falling Away From Me. Perhaps most commendably, when nu metal eventually died Korn did not allow themselves to be dragged down with what they had spawned. In 2017 with a huge body of work and a tremendous legacy behind them, Korn have cemented themselves as a genuinely classic band and one of metal’s all-time greats.

Fred Durst and his red cap became the poster boy for nu metal at its peak, a cartoonish figure forever tied to that movement and that moment in time. Limp Bizkit are also totally obnoxious. Even before the Rollin’ dance became a worldwide phenomenon, it’s not hard to understand why not just some traditional metal fans find Limp Bizkit entirely repugnant and impossible to take seriously. Limp Bizkit though at their best represent nu metal at its absolute gloriously blunt zenith, with songs that strike a primal point within a crowd and force them to bounce and lose their absolute minds. A song like Break Stuff is the nu metal spirit encapsulated. That’s not to say Limp Bizkit are dumb either; the musicianship of the rhythm section and the inventive nature of guitarist Wes Borland are off the scale. Especially on 1999’s Significant Other, the production values hold true to this day too, a thick wall of sound that allows each rhyme and riff to sound as massive as it can possibly be. Deceptively stupid, totally brilliant.

Snot are perhaps the lost gem of nu metal’s first wave, through the saddest of circumstances. Snot brought punk rock energy to nu metal alongside almost stoner, laidback vibes, two elements that are not easy to balance at all. Indeed, perhaps there’s an argument that Snot never really belonged to the nu metal genre at all, as their 1997 debut Get Some’s hardcore attack, funk rock swagger and traditional rock guitar licks are a world away from the churning grooves of Korn. What they were undoubtedly though is one of the most exciting bands of that scene in its early days. However the death of charismatic frontman Lynn Strait in a car accident in 1998 would cut the lifespan of this band short and mean they would never be able to capitalise on the potential they had to become one of the major players of this era of rock history. Get Some though remains full of standout moments, and an album that deserves to be held up and remembered.

Sepultura of course pre-dated anything to do with nu metal and were bigger than just that even in their dalliance with it, one of the all-time legendary metal bands whose influence is felt in thrash, death and black metal as much as anything in more mainstream territories, but the nu metal story cannot be told without mention of Sepultura’s impact. When Sepultura released Roots in 1996 they were already alongside Pantera as the reigning kings of metal in that decade, but for them to embrace nu metal and arguably in the process create their finest album is an insane thing to comprehend. Max Cavalera to this day is simply a heavy music fanatic, whose own work often shows elements of the exciting style of the day not as a result of cynical trend-jumping but instead genuine passion and enthusiasm for what is going on in his beloved genre. The man who had released Beneath the Remains and Arise championing the likes of Korn almost legitimised nu metal in a way, and Roots’ marrying of down-tuned bouncing riffs which Cavalera did arguably better than everyone else with tribal elements from Sepultura’s native Brazil was a masterstroke. When Cavalera left Sepultura, that same spirit carried over into the debut record with his new band Soulfly, and both of these albums remain highlights of this period in metal history.

Another legendary metal band who embraced nu metal were Machine Head, but unlike Sepultura their attempt was far from a home run. Off the back of two ferocious records in Burn My Eyes and The More Things Change…, Machine Head suddenly transforming into what they were on The Burning Red was for many a bitter pill to swallow. The change in image probably had as much to do with this as the actual music itself (Rob Flynn may regret that red tracksuit and spiked hair for the rest of his life), but The Burning Red’s rapping and Ross Robinson production job was certainly a pretty radical departure. The Burning Red though surprisingly holds up mostly very well today solely down to the quality of the songs. Flynn is actually a very good rapper unlike many of his contemporaries, and the opening flurry in Desire to Fire is irresistible. Elsewhere, From This Day and The Blood, The Sweat, The Tears proved genuine anthems. It’s not perfect and certainly not Machine Head’s finest moment, and the follow-up Supercharger would have far fewer redeeming features, but The Burning Red deserves a revisit from many.

As the second wave of nu metal rolled in at the back end of the 1990s and turn of the century, for many people things began to turn sour. The intensity was dropped and the creativity began to stagnate, and nu metal turned from a disparate group of genuinely unique bands each with their own identity into a sea of bands who seemed like cheaper, watered down versions. There were still a few standouts though. Spineshank have gotten a bad rap, and sure their mechanized assault seems a bit flimsy when Demanufacture by Fear Factory exists, but taking that industrial precision and applying it to the looseness of nu metal did result in some decent tunes on their debut and most notably on sophomore record The Height of Callousness in the likes of Synthetic which holds up surprisingly well today.

You should always listen with your ears and not with your eyes, but people tiring of nu metal’s silliness come the year 2000 could be forgiven for looking at Mudvayne and running as far away in the opposite direction. The ladybird and the humbug though didn’t do justice to the music contained within Mudvayne’s debut L.D. 50, one of the most surprisingly relevant records of the nu metal era. The bounce and the looseness of nu metal was there, but Mudvayne’s music was hugely technical in a way the dumbed down bands surrounding them couldn’t dream of being. In the 2010s with the djent movement having become as prominent as it has, L.D. 50 is surprisingly relatable and finds a fresh lease of life.

Some of the greatest bands of the nu metal era are bands who would outgrow and transcend it because they were simply too good and too unique to stay there, bands like Deftones and System of a Down. Slipknot, the band who would go on to arguably be the biggest metal band since Metallica, were only truly nu metal on their debut album, but when that album is a contender for the greatest debut in heavy music history it would be criminal to not give it a mention. Arriving in 1999 as the second wave of nu metal was gaining steam, Slipknot took its principles and ramped everything up to make it as brutal and extreme as it could possibly be. The debut Slipknot album is barely controlled chaos, the sound of nine genuine freaks with bile in their throats aimed at everything around them attempting to tear the world down. Slipknot set the standard so ludicrously high that nothing else could hope to match them. As violent, hateful and aggressive as 99% of extreme metal albums and starting with one of the greatest opening runs of songs on a record ever, something this white hot and palpably vitriolic can never be lost to time.

Nothingface are one of the bands who did not survive, splitting in 2004 and while achieving some moderate success perhaps never really getting the credit they deserved. They were reasonably early to their party, putting out releases in 1995 and 1996, though it wasn’t until 2000 with their third album Violence that they’d really start getting places with the single Bleeder gaining some decent traction. Unlike so many of their peers though, Nothingface’s music doesn’t feel overly dated. Elements of thrash and groove metal were more present in Nothingface with the band being genuinely heavy when they wanted to be, and Matt Holt’s vocals were an important focal point with enough personality to set him apart. Holt passed away in April this year after battling a degenerative disease, and now seems a good a time as any to revisit the works of Nothingface.

This final pick is perhaps cheating as Cane Hill are very much a modern band, forming in 2011 and releasing their debut album only last year. Their presence in the rock landscape of today though is a telling one. Prominent bands like Bring Me the Horizon, Of Mice & Men and Issues have taken huge amounts of influence from the nu metal bands of the 1990s and early 2000s, but Cane Hill go beyond adding these influences to a more current genre and are simply a pure-blooded nu metal band. Their live shows and the best moments on their debut Smile hold plenty of promise, tracks like MGGDA and especially The New Jesus easily sitting alongside the club bangers of their forebears. With nu metal no longer an oversaturated genre and after years of overly polished metalcore taking its place, hearing this style done so well today is actually refreshing. It’s proof that not only are the big names of nu metal’s heyday incredibly influential and relevant to today’s world, but that nu metal itself is not an inherently tacky and dated form of music and continues to have something to offer.