We’re liking this video from Aussie progressive rockers [ME], check out ‘Like A Fox’ here if you dig The Mars Volta and erm…Queen? 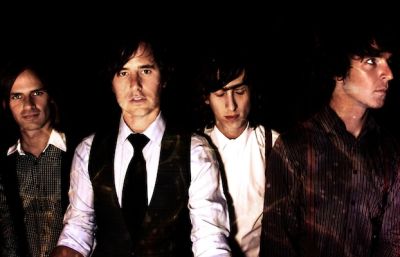 [Me] are Luke Ferris (vocals, guitar, piano), Damian Tapley (guitar, vocals), Michael Godde (bass, vocals) and Spike Rogers (drums, programming). The band formed in 2009 in Melbourne, Australia, although Australia being Australia, only drummer Spike is from Melbourne itself, whereas Damian hails from Perth and Mikey scooted down from the snowy peaks of Mount Beauty. All four are agreed, however, that Melbourne is the epicentre of the Australian music scene. Indeed, Spike suggests that this is because “there are countless pubs, venues on every street corner which have capacities of 25-50 people unlike other cities” whereas Mikey just describes it as “an outburst of happiness with people hugging each other all the time. In fact,” he adds quietly, “no one wants to leave!” Well, after a monster ten-month residency at the Evelyn Hotel, Melbourne and a sell-out Australian tour supporting alt-rock heroes Dead Letter Circus, leave is something that [ME] have definitely done – and it’s to our mutual benefit.

But why [Me]? “Because it’s faintly absurd and un-googleable” Damian suggests and “we wanted something short and sharp” adds Luke. Of course, it’s true that there’s something intangible about both the name and the band. “We use drum troupes and orchestras, we love classical music and theatre and showmanship and we like to go places no one has been to before.” [Me] cite The Beatles, The Mars Volta and Led Zeppelin as tangible influences but you could just as easily suggest that Radiohead and Queen had decided to take tea together in order to outdo each other’s most outlandish ambitions.

Debut single Like a Fox is immense and a case in point, having already picked up support at Radio 1 and XFM. Kicking off with the killer line “Wake up, my dreams are so much harder than yours” the song is a breath of fresh air although, as Luke explains, the line itself is as “meaningful or as meaningless as you want it to be.” The song is actually about one single, mad, debauched night in the life of a single man and not a million miles away from how Griffin Dunne’s character in Martin Scorcese’s After Hours behaved after leaving work for the night.

[Me] are currently in the UK recording their debut album with legendary producer Simon ‘Barney’ Barnicott (Kasabian, Arctic Monkeys, Temper Trap) set for release in early 2012.